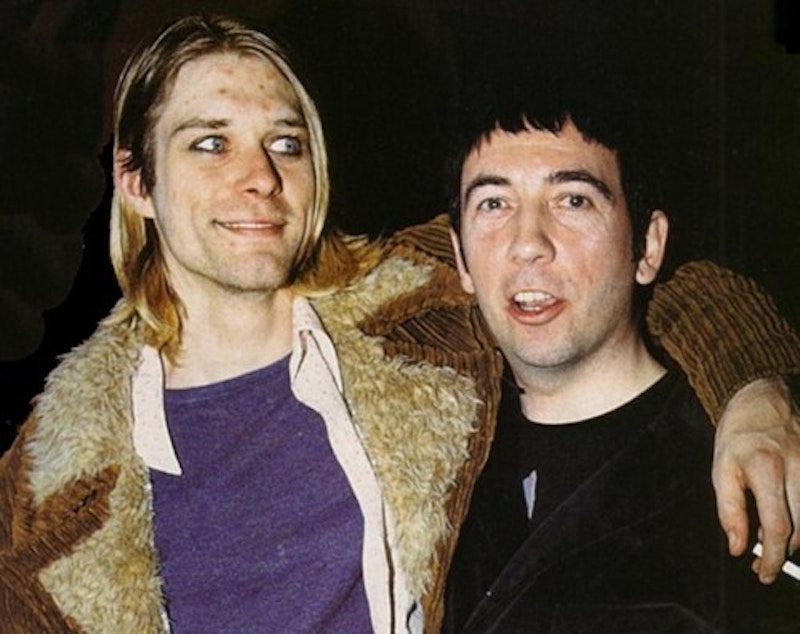 Montage of Heck might be “the greatest rock doc ever made,” but that’s not a high bar. It’s no Gimme Shelter, Dont Look Back, or Meeting People is Easy, but at least it emphasizes Kurt Cobain’s often overlooked sense of humor, and his art outside of Nirvana. Director Brett Morgen said at Sundance that he didn’t intend to tear down or build up Cobain, but instead bring him to eye level. Great idea, even though the only major unseen material in the film is home movies of Cobain as a toddler and strung out at home with Courtney and Frances in the last two years of his life. The myth Morgen aims to break has already been broken, and in much more comprehensive detail by Charles R. Cross’ 2001 biography Heavier Than Heaven. Morgen has also stressed the difference between the experience of reading a book and watching a movie—instead of four dozen examples of suicidal tendencies and a hyper-sensitivity to humiliation, Morgen is forced to compress and pick just a few that would convey the message just as well.

Montage of Heck’s most glaring failure is its animated sequence, narrated by Cobain, of how he lost his virginity to a “retarded girl,” and came close to suicide after being ridiculed for it at school. This is covered in Heavier Than Heaven, but more people will see this movie than will ever read that 14-year-old biography. Again, this story is animated, and its depiction of the girl is so clumsy and off, with a character design that suggests Down syndrome solely through a long forehead and a frown. Keep in mind this is a two-hour movie—the sequence sticks out like a wart, and clearly Morgen was set on including as much exclusive material as possible. So the sequence is justified by Cobain’s unheard narration, but as a way to explain his hyper-sensitivity to humiliation and rejection, there were better anecdotes to choose from (like the period when Cobain was homeless and slept in the waiting room of the hospital he was born in). Unfortunately, the “retard girl” story has been animated and canonized.

Well, good, I guess. The cultural obsession with Nirvana and Cobain has not ebbed in the 21 years since his death, and all the writing and discourse surrounding him is 100 percent hagiography. If he’d lived to 40 like John Lennon, doubtless more dirt would’ve occurred and emerged, and his reputation, like Lennon’s, would be more mixed and queasy with a lot of people my age (22).

Michael Misiak’s piece yesterday on Splice Today was a bit hysterical, asking if Cobain was the “right person to address these issues with such blatantly triggering language” in songs like “Polly” and “Rape Me.” Anyone who dismisses or defends the grotesque virginity story as another example of Cobain’s “tortured genius” is a dolt. But he wrote “Polly” decades before “problematic” and “trigger warning” were part of the lexicon. I never cared for “Rape Me,” a lazy lyric, but “Polly” remains remarkable, haunting and humanistic. It’s no cheap “I’m an ally” piece. He was a kid his whole life—“I love myself better than you/I know it’s wrong, so what should I do?” If you read Heavier Than Heaven, you’ll realize that Cobain was just as much of a pseudo-feminist as Lennon, guilty of micro-aggressions, outright assault and tone-deafness. His experience was of its era, and if there were more years to expose Albert Goldman-style, Cobain could’ve ended up lumped in with Woody Allen, Bill Cosby, and Roman Polanski. But the hagiography continues, and not nearly enough has been written about the utter stupidity of including this sequence in Montage of Heck, a piece of a great idea very poorly executed.