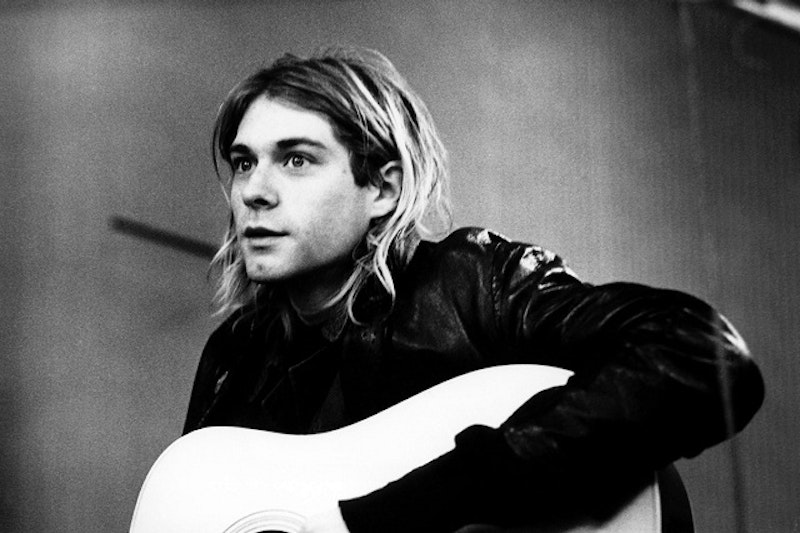 The absence of Kurt Cobain and the lingering vapors of his career still loom large, on the 18th anniversary of his death this week No one since has been able to mark and redirect the course of pop music like Nirvana did. Their sudden stratospheric rise and violent, grotesque, sad ending made a boom that little else has been able to escape. Nirvana left in its wake several generations of imitators that continue to spawn today. You see rock bands are still perpetually tagged as “the next Nirvana,” the group that’ll galvanize the music nerds, the press, the college lugheads, high schoolers, and as much of the public as Cobain’s band did in 1991. The 2000s was a decade of revivalism in rock—little new or progressive was accomplished on a broad scale. Radiohead is just about the only stadium band making music that sounds like the future these days. Take a look at your local amphitheater’s summer schedule. I’ll bet you it’s half rock dinosaurs from the 60s, 70s, or 80s milking the reunion tour cash cow, and half contemporary artists that sound like tributes to one of those three decades. My generation has no sound of now—it’s a medley of the past.

Nirvana was a galvanizing force not only because the songs were fantastic, but because people had a visceral reaction to their sound. It didn’t matter what words Cobain was saying, you knew exactly what he meant and how he felt. It wasn’t long before that reaction would be monetized and marketed beyond recognition, but even after all the merchandising, licensing, and slimy publishing deals, Cobain’s anguished distress call still rings true. So true that it still seems to intimidate frontmen, too bashful or weird to communicate anything as universal as “Lithium.” Cobain is still idolized by young musicians as a brilliant, quintessential rock star and songwriter. It’s very weird to live in a time when your heroes are dead, bald, or retired, and the kids who should be making great era-defining music prefer entertaining, catering to nostalgia and easy pleasure rather than emotional catharsis.

Not even 20 years after his death, Cobain is as mythologized and worshipped as Hendrix. The human being is long gone, and Nirvana’s work will forever be frozen in time, without the bloating and blemishes of post-30s breakups, reunions, okay albums, shit albums, people getting fat, mean, old, stupid, whatever. It’s infinitely sad, and it won’t ever get any better. None of us will hear a new Kurt Cobain song ever, and that sucks. His work wasn’t even close to finished, and now it’s like we all have a sneeze we can’t get out, or a terminal case of the hiccups. Cobain’s violent suicide was so final and aggressive that it took the wind out of everyone’s sails, and it feels like we still haven’t picked up the pace yet. We need a singular figure to put our trust and our integrity into. Every era needs its own heroes and villains—even if it feels daunting to move out of Nirvana’s shadow, and even if so few people seem interested in doing it, we have to, for our own survival, for our mental health. We need our own identity.