On his self-titled seventh album. 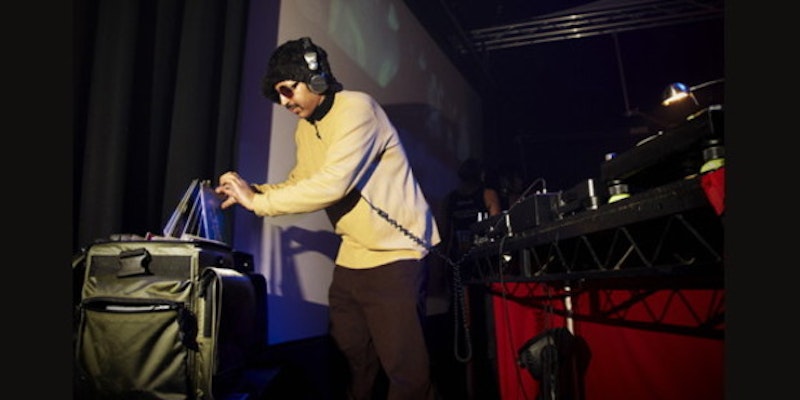 There’s a musical tradition—stretching from Ray Charles through Stevie Wonder and beyond—of artists synthesizing multiple strains of pop. With a wide-ranging ear and an open mind, these figures show links between disparate groups of sounds and build connections which were previously lacking. Kenny Dixon Jr., who records as Moodymann, is a modern day synthesist. He’s known for being an important part of the Detroit techno scene, but he’s also at home with soul, funk, and disco. He writes political tunes about the struggles of his city, sex, and songs that could be beefed up and turned into pop hits. He manipulates samples like a hip-hopper, nods to the guitar pyrotechnics of Hendrix, and enjoys pairing a recording of a church revival with an insistent dance pulse.

Moodymann’s latest release (self-titled) is his seventh album, but it’s the first since 2004, and it might have the least allegiance to house or techno of any Dixon full-length. This makes it his wildest release yet. Some of the material on the album has been circulating for a long time—Dixon’s albums, like his debut Silent Introduction, are often cherry-picked from already-released singles and EPs and then merged into longer documents—but Dixon puts it in a new context. He has some high-powered collaborators helping him out, including Jose James, who released the acclaimed No Beginning No End last year, and Amp Fiddler, a longtime Detroit musician and an associate of the famous hip-hop producer Jay Dilla.

Moodymann can be dizzying, like a day filled with spontaneous decisions executed at full throttle. The album was originally 12 tracks and vinyl only; the digital version that just came out ballooned to 27 tracks, many of which are short. Dixon excels in environments that barely overlap on pop’s Venn diagrams. The main continuity across Moodymann is rhythm—pushy, shifty, and tricky—and restlessness, the ambition and ability to cover a wide swathe of musical territory.

Take “Desire,” a song that the English group the xx would kill for. It works around a two-word refrain that’s slightly staggered, so it sounds like an offbeat call and response: before “remember” finishes, an echoing “yeah” kicks in. It could be either “remember, yeah!” or “remember, ya;” it’s not clear if this song is an exhortation—Remember!—or an attempt to revive a loved one with memory. Underneath this ambiguity, a bass-heavy techno thump keeps picking up elements (clicks, clacks, clinks) and then discarding them. The beat occasionally slips out of view, forcing the listener to enact the message in the song’s hook by remembering the pulse when it disappears. This also happens when the vocalist sings, “I awoke from a nightmare/the only survivor left to feel love,” and the music drops away for a moment to let that feeling sink in. Spare keyboard is the only other color here, and the emptiness drives home the nostalgia of the chorus. Every part of this song is in service to its hook.

Contrast this restraint with the rush of “Lyk U Use 2,” which has the potency of a Dr. Luke-crafted chart-topper. This tune rockets along, with chants of “hey, ho” and little licks of guitar caressing the bass line. There’s a forceful rock beat holding up the song, but the action is all on the fringes, which keep creeping into the center of the frame. A second drum line repeatedly swoops in to meet briefly with the first and then explode in a chattery burst. In the middle of the song, Moodymann starts chopping up the beat, splicing and looping it. But after a minute, he can’t resist bringing back that galloping rush.

Stylistic variety isn’t limited to these songs, both of which appear early on the album. “Heaven” has no beat, just a woman intoning, “heaven is your eyes” and some wild electric guitar. A jazzy flute digression on “Hold It Down” brings to mind Gil Scott-Heron. “Radio” pulls in the high-pitched squeaks prominent in 1970s albums from Jorge Ben and Caetano Veloso—some of Brazil’s finest synthesists—while Lana Del Ray is remixed on “Born To Die.” Moodymann talks dirty like Prince, and he spells like him too. (Put “Iguessuneverbeenlonely” next to Prince’s “Anotherloverholeinyohead.”) “ulooklykicecream” filters Sly Stone through neo-soul’s penchant for ambience and handclapped beats. Except unlike neo-soul, this music has no qualms about abandoning R&B’s past to morph into something techno-inflected, fiery, and throbbing.

While the album works around a variety of musical centers, it doesn’t lack a sense of place: Dixon puts Detroit everywhere in his work. It’s the glue—and the threat—that holds everything together. One of the first sounds on the album is “Detroit, Michigan” on loop. “Yet Unknown” samples a monologue about murder, noting “other cities have all the problems Detroit has. For some reason… their citizens don’t kill each other as often.” (This segues into the Del Ray remix, giving her “Born to Die” a very different spin.) Other samples touch on the city’s heroin dealers in the 70s, its hit squads, and its rate of violent crime. Moodymann plays with elements of song and style, existing thrillingly in a musical space where few options seem off the table. But he makes you remember—a song provides only temporary respite from reality.