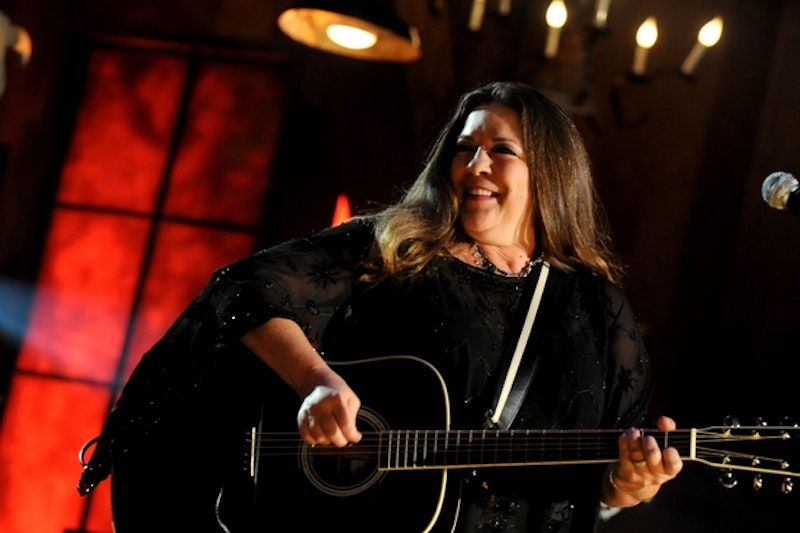 Carlene Carter is the Cash family performer who never quite found her niche. Rosanne, Johnny's daughter by his pre-June marriage, straddled the line between country and easy-listening and in the 1980s managed to temporarily but decisively outperform her dad on the charts and in the public consciousness. Carlene tried too, but it didn't happen. The daughter of June and country honky-tonk performer Carl Smith, Carlene had an impeccable country pedigree, but her mix of jittery retro-rockabilly, rock, and neo-traditional was just a little too left-field to catch fire. She had a couple of Top 5 country charting singles in the early 90s, but quickly faded after that, helped into semi-obscurity by country radio's increasing popificiation and her own battles with addiction.

Carter's bid for stardom may have fizzled, but that doesn't mean her career's over. On the contrary, in a lot of ways she makes more sense now than she ever did. Her 2008 album, Stronger, was one of her best and most consistent efforts, and her new release, Carter Girl, out this week, may be even better.

Too old for the Taylor-Swift-dominated country radio dial in any case, Carter has given up on pursuing the next new thing and has instead turned to her heritage. Almost all the songs here are ones associated with the original classic 1930s Carter Family, which featured Carlene's grandmother, the legendary Maybelle Carter, on guitar.

The album also features a plethora of guest spots by country glitterati. Kris Kristofferson adds his trademark talk-singing to "Black Jack David," struggling through his lines as Carter soars effortlessly around and above him. Willie Nelson steps up for a sublime collaboration on "Troublesome Waters," complete with the lonesome harmonica and lazily soulful guitar which drifted through his classic 70s work. The only problem with the track is that it's not the whole album; I could listen to the aging Willie provide out-of-step harmonies to Carter's mountain burr forever.

The highlight of Carter Girl is "Lonesome Valley 2003," an adaptation of the traditional "Lonesome Valley," with Vince Gill providing backing vocals. The song's about June dying. "Woke to the sound of my baby sister/crying like the day she was born," Carter sings, connecting her mother giving birth and her mother leaving, or, as June believed, being born again. The song moves on its slow-paced way, alternating the familiar lyrics—"You've got to walk that lonesome valley/you've got to walk it by yourself"—with the funeral preparations and the family struggling with grief. "Johnny just cried because Junie had died/he didn't care to carry on/So we laid him next to momma." And then she names the songs they sung at the grave:  "Anchored in Love" and "Peace in the Valley,” songs within songs, that Johnny and June performed, the names of which are now both tribute and lament.

I listened to "Lonesome Valley 2003" while I was driving the car, and cried so hard I was afraid I’d run off the road. Certainly, it affected me because of how long I've been listening to Johnny Cash and June Carter Cash's music, and my own sadness that they're gone. Carlene's voice has always been an uncanny echo of her late mother's, and hearing her sing like her mother is almost unbearably affecting. I guess you could see the fact that the track relies on those particular associations as a weakness, or a limitation. But it’s appropriate in a song so focused on what's gone before, as both weight and resource. Carter may not be a household name, but, at this point in her career, she's a link to the past. It suits her.