Or I'll Give You All of Myself

Okkervil River, live at the Ottobar. 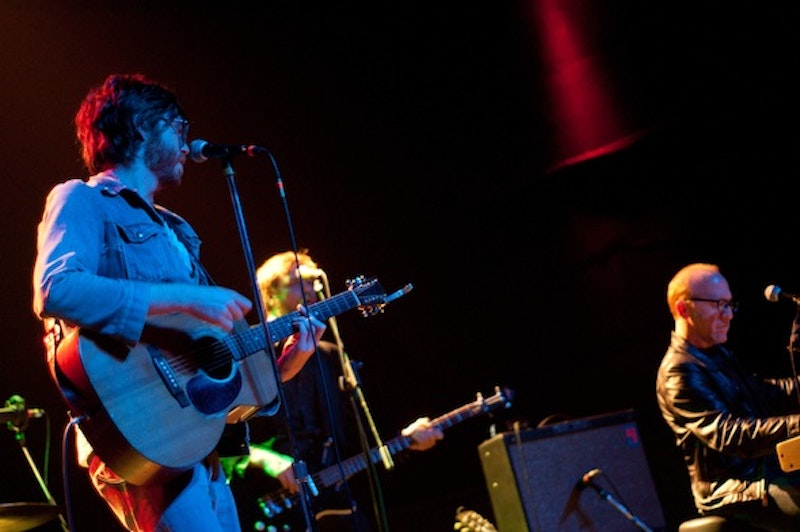 Back in 2008, during my last year in college, there were a few months when Okkervil River's The Stage Names was pretty much playing on repeat. I remember hearing that first track, "Our Life Is Not a Movie or Maybe," on Late Night With Conan O'Brien—a really killer performance that ends with O'Brien yelling a very approving "YEAH!", though I can't find any videos of it now—and what followed was weeks of drunken strumming and wailing as I sat around my dorm room with a guitar and a bottle of Old Crow and tried to learn every song on TaCoWiki, the unofficial Okkervil River chord site. Most likely a fucked up two a.m. rendition of "Westfall" got frontman Will Sheff laid a few times, though it never worked for me. It did, however, annoy the shit out of everyone else in my dorm and probably got me a couple of RA write-ups.

After graduation I all but forgot about Okkervil River until Thursday night, when I happened to drop by the Ottobar for a beer and saw they were headlining. The first few years after I moved to Baltimore I'd go to shows three or four nights a week, but at some point I decided paying $20 to stand in the back of some dimly-lit shit-smelling bar, chugging PBR tallboys, listening—because there's always, without fucking fail, some obscenely tall fucker right in front of you—to some band you're not even sure you like that much play through distorted, blown out speakers just isn't really that fun.

Okkervil River is basically post-Pavement hyper-literate angst with more jangle thrown in. They made it big in the mid-2000s with Black Sheep Boy, a sort of concept album built off the Tim Hardin song of the same name, and which secured them a contract with Virgin/EMI. All of their follow-ups, from The Stage Names to last year's The Silver Gymnasium, have hit the Billboard charts hard—The Silver Gymnasium actually made it to No. 7—but I guess that doesn't mean as much as it used to since last night's show wasn’t sold out, and the four or five fans I talked to out in the alley during cigarette breaks all said they only really knew the older stuff.

Don't get me wrong, the newer stuff sounded good too—though the opening medley may have been one long song or three or four songs that were exactly the same, I couldn't tell—but as I stood there, watching the band on one of the Ottobar's grainy CCTVs, nodding along, singing if I remembered a line or two, I was again asking myself: Do I even like this band? When my girlfriend texted me "Any good?" I texted back "I think?" And it wasn't until half-way through the show that I finally realized something: of course they were good, but they also trafficked in a kind of indie fantasy—it was like that with Conor Oberst for a while, a kid from Omaha with a guitar who ended up on MTV. But no one ever said Will Sheff was the next Dylan. Sheff was any of us; just another one of your high school friends who used to sit out front of the coffee shop with a beat-up acoustic, who maybe felt things a little too much; who had some songs about his family, his friends, that girl who broke his heart. You watch and you think, Yeah, that's just my friend, Will. And then, That could have been me.