Our intrepid reporter gives you the haps on the craps in the middle of America. 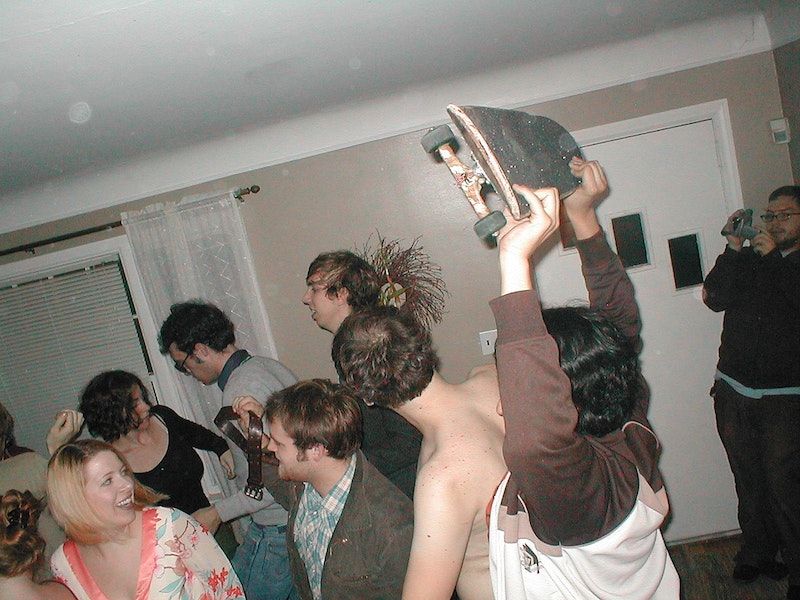 We’ve had some good weekends and weekdays out here in the Midwest what with all the weather, trees, and things going right. Someone started saying that Wednesdays are the new Fridays and Saturdays and who am I to dispute that? But let’s talk just for a moment about, well, not the “scene” per se but another thing. After participating in one of those mass anonymous wild ride bicycle gang extravaganzas for the first time, I feel great. I feel like three crisp $100 bills.

Then I spoke with my friend Sam who said: The majority of bike culture enthusiasts are generally those people who have a voice in the social sphere, right? So these mass bike rides are just a reassertion of that power, of that stance. A bunch of white males breaking street laws and screaming at people and being as visible as they possibly can and gettin’ a huge adrenaline rush. I mean, it’s totally sexual. Is that not true? It’s just white kids looking for reaffirmation from white kids that they’re the shit.

I thought about it for three minutes before realizing it’s just a bike ride. I’m happy to say no one was yelled at and that Sam is just plain wrong. We went on a bike ride and that was that. Then he said: I noticed that there’s a bunch of black longboarders in town. I mean, what’s that all about?

I couldn’t tell him. But that’s beside the point. I can’t wait to tell you about some of the real happenings here.

One show I found particularly remarkable was Brilliant Colors, Swimsuit, The Beets and Bad Indians at a venue called Arbor Vitae. You never know who you’re going to run into at Arbor Vitae.

For example, I ran into Stella. Tina is a bitch with crabs, she said. I wouldn’t piss out the flames if someone poured gas on her mouth, she said. Shut your trap, I said. She looked at me. I said: Don’t give me that rigmarole. Oh man. The look she gave me. It just got heavy in there.

Brilliant Colors. What a lot of fun. I remember hearing their last LP & thinking, I don’t know—is this touching me in a good way somewhere? Then I made a number of faces while contemplating the whole whopper. Or maybe I made faces because I was working hard on something. Brilliant Colors were fantastic. The drums were rude, the bass was mean, and the guitar tone was inscrutable. You could tell something was up. You could tell ‘cuz the vibes were so peculiar and there was a weird whiff in the air. It turns out that Jess Scott of Brilliant Colors accidentally left her pedals in a hotel room in North Carolina. I asked Jess what happened and she said:

“Brilliant Colors broke down just before the Tennessee border in North Carolina near a town called Waynesville. After MUCH drama we bunked up for the night while our car was being fixed in the motel every local warned us to not stay in but we were feeling very cheap so we did anyway. Within five minutes we found what we thought was possibly a bedbug on our friend and proceeded to FREAK THE FUCK OUT despite alternative opinions that it might be a tick. We have friends in New York, we've heard the horror stories; we could NOT be that band that took bedbugs on tour with them around the country like our tiny evil roadies in tow. So, I refused to go back in the room and had Diane shuffle my crap out to me.

Long story short, we arrived in Ann Arbor the next day (after blowing a tire in Kentucky, no less) only to realize I'd left my reverb & tuner pedals and 12-volt adaptors in the suspect room. Totaling more cost than my guitar probably. I desperately called the motel and offered him the luxurious riches of $25 dollars should he mail the pedals back to my house in San Francisco. First he said he threw them out because they might have bedbugs in them, then he backtracked and said he had them, and then he sternly asked if I'd told the neighboring motel about the bedbug scare. In truth it was probably a tick so we didn't tell the new motel of course, and I used the term ‘sir’ for the first time in my life. Then I mailed the check. A couple weeks later I received my pedals. A miracle and all is forgiven and forgotten, Waynesville, NC! A couple weeks later I got some mysterious bites and FREAKED THE FUCK OUT again and had a fumigator set bedbug traps in my room with which I found no bedbugs and the bites have now subsided, despite being really weird bites with really weird timing.”

Touring life! Moving on, Swimsuit & Bad Indians have made “favorite local band material” a household phrase (in the Midwest at least!). Swimsuit was like a cool breeze through my hair but also warm and windy. Every Bad Indians show is different. They’re always changing, they always look great. No one knows why they haven’t been signed to a respectable label but I think it’s a case of “not yet.”

The Beets are unlike any metal band ever. What they lack in chops, they make up for in funk. But they’re actually neither metal or funk (nor do they reek if that’s what you think “funk” means). In actuality, The Beets are currently one female and three males. Their rapport is what you’d call “something else.” While eating food at a diner called The Fleetwood, lead singer Juan Wauters told me about Robert Dylan, a folk singer I know little or nothing about. Bass player Jose Garcia turned to me and said, “Who cares?” Do you see what I mean?

Now that’s all the bands that played that show. But wait! There’s more going on in the Midwest. More like you wouldn’t believe! In the rumpus room of a really great clubhouse filled with gentlemen and sometimes their wives and daughters, there was another show. The venue is the Elks Lodge. The show was Noveller, U.S. Girls, Talk Normal and Turn To Crime.

Turn To Crime. Man. What a guitar hulk! When a person tells me that they play guitar, I tell them to shut his or her trap. Derek Stanton plays guitar. Everyone else may as well be playing a tiny toy tambourine or those finger cymbal things for all I care. But Turn To Crime has chops and tunes.

Talk Normal has what we call VIBES. They introduced themselves and then there was a cicada sound and I freaked out. What’s this vibe, I thought. What would a “genie” sound like? What was that effect on the snare drum, I said to Andrya. I just use noise and gates, she said. Keep it up, I said. They don’t sound like anyone else. They also radiate a radical positivity that at once makes you feel strange that you don't do the same because it's infectious and very appealing.

I couldn’t believe the pipes on U.S. Girls. She’s really singing, I thought. I could feel people falling in love while she sang. During the set, I saw this girl. She was beautiful. She was about “mid-crowd.” The expression on her face made me wonder if she could feel the music on her skin or inside somewhere. But she also looked fucked up. What are you doing, I said. I’m really feeling it, she said. In HERE, she said. She pointed at something but I didn’t see what she pointed at. That’s funny—that’s where I feel it, I said.

Noveller. Oh man. She was like “skittle-skittle-skittle” then “rink-dink-dink” and then a big “schwomb” and then the most delightful “tinkle-plinking” melody. I darn near buckled at the knees. Matt Kimmel of the Neon Marshmellow once said to me that he thought Noveller gets better and better. It was so sweet and I believed him so I patted him on the back but this was at a different show that happened a while back. As for Noveller, she was flooring people and then two songs from the end of her set when her Boss PS-5 Super Shifter took a dump (that means the pedal broke—two broken pedal stories in this installment). We thought something was wrong with it but it could have been something else.

Now I’m sick of people talking about pizza so much but I have to say that I had a pie after the show and it was delicious [For our European readers: “pie” is what we call pizza in America.] . In the next installment I’ll tell you about a show at a brand new underground Ohio venue called PepperTown and some fistfights I may or may not have seen at various parties in the Midwest.