Straight from the Cat’s Cradle in Carrboro, North Carolina. 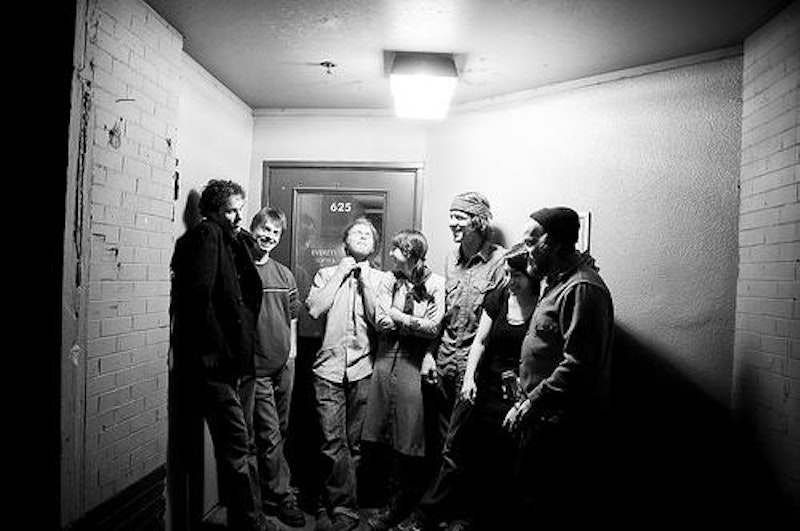 A few years after American indie folk’s mid-decade spike in visibility, which, with over-exposed albums including Devendra Banhart’s Rejoicing in the Hands and Joanna Newsom’s Ys, may not have been a musical zenith, the genre has settled back into an unassuming position that seems to fit the music better. The “freak folk” fringe having largely faded, the nourishing, elemental influence of Americana in all its permutations continues to generate quietly exciting new music. This was evident last week at Cat’s Cradle in Carrboro, North Carolina, during an evening of itinerant, worn-in, unbeaten songs performed by The Low Anthem and Blind Pilot. Both bands make music that is melancholy but not maudlin, that is steeped in old-time American music but not anachronistic.

The Low Anthem, a Rhode Island trio, began their set with pretty unconventional instrumentation: Ben Knox Miller playing acoustic guitar and singing, Jeffrey Prystowsky on organ, and Jocie Adams playing the crotales—sort of a small xylophone made up of discs instead of planks—with a violin bow, by far the most interesting thing I’ve seen done with a violin bow since I last saw Sigur Rós. At the beginning of their first song, “Cage the Songbird,” I had a little trouble hearing them in the half-full space. By the end of the song, the Monday night crowd had filtered out of the bar and was watching in hypnotized silence. During the next song, the title track from Oh My God, Charlie Darwin (released in June on Nonesuch Records), Prystowsky switched to upright bass and Adams to clarinet, filling in under Miller’s high, lonesome falsetto with a reedy drone.

The Low Anthem - "Cage the Songbird"

I would have been content with a set full of songs like these—unadorned, restrained folk that makes the most out of a few un-electrified textures. But the mood quickly changed when Prystowsky played a lengthy, Mingus-esque upright bass introduction to the old traditional song “Don’t Let Nobody Turn You Around,” which has been recorded by Blind Willie McTell and even the Steve Miller Band. Adams picked up an electric guitar and sang harmony with Miller (Ben, not Steve), who played drums, positioning the song somewhere between jazz, folk and electric blues. It is the fluidity with which The Low Anthem moves between instruments and areas of Americana, highlighting the spare honesty that ties them together, that makes their live show particularly entertaining. Where the transition in the middle of Oh My God, Charlie Darwin is a bit jarring—going from softer songs to the Tom Waits-like barnstormer “The Horizon is a Beltway” and a cover of Waits’ “Home I’ll Never Be”—the Low Anthem’s live set moves seamlessly from soft to loud, luring you in and keeping you there.

The Low Anthem is a perfect opening act for Blind Pilot, who sustained the louder-but-restrained dynamic with mostly mid-tempo pop songs fleshed out with folk instruments. Perhaps because they’re both from Portland and because they opened for them during their Hazards of Love tour, Blind Pilot bear a passing resemblance to the Decemberists. That is, a far less arch and pseudo-operatic version of that band—say, circa Castaways and Cut-Outs or especially the 5 Songs EP. On paper, or at least in the liner notes to their album 3 Rounds and a Sound on Expunged Records, Blind Pilot is a two-piece comprised of drummer Ryan Dobrowski and singer/guitarist Israel Nebeker. Live, the touring band expands to a six-piece, warming up the songs with trumpet, xylophone and harmonium without losing the tightness of the album versions. Nebeker’s lyrics wear their melancholy lightly, never sounding downtrodden and keeping his earnestness in check. Highlights, like “Go On, Say It,” make the most of his unhurried, effortless delivery, enhanced live by low-key harmonizing with multi-instrumentalist Kati Claborn. The typical college-town crowd—young faculty types, hipsters and the odd frat boy – sang along with several of the songs, and showed that Blind Pilot’s relaxed folk-pop isn’t impossible to dance to, or at least sway.

Like The Low Anthem, Blind Pilot showed a judicious approach to cover songs, breaking up a set that included almost their entire album with a lilting rendition of Gillian Welch’s “Look at Miss Ohio,” introduced with earnestly star-struck banter about sharing the stage with the bluegrass legend at the Lyons Folk Festival in Colorado. Their second encore was also a cover, this time of MGMT’s “Kids” (30-second teaser below):

If a set that includes old-timey restraint and synth-pop hyperactivity sounds unlikely, cheer up: Blind Pilot doesn’t seem to be trying to impress their audience with the contents of their iPods—when Nebeker introduced the MGMT song by saying, “We really hope you know this one,” I took him at his word. Their understated approach highlights the similarities between disparate styles, making selections musically interesting without appealing only to your head. During the unreleased song “We Are The Tide,” Nebeker sings, “We won’t last long, but we’re gonna give it our best try.” It isn’t the most original statement, but it is emblematic of the limited lifespan of indie bands in the constant flood of new music. Blind Pilot and The Low Anthem celebrate the variety of American music without being pretentious about it, making their live shows both musically engaging and a lot of fun.

Although not with each other, The Low Anthem and Blind Pilot continue to tour the States and Europe into next year, with Josh Ritter and Laura Veirs respectively.