Live From The Irony-Free Zone

Todd Rundgren might have been a better-known, more influential musician if he’d only been a bigger jerk. 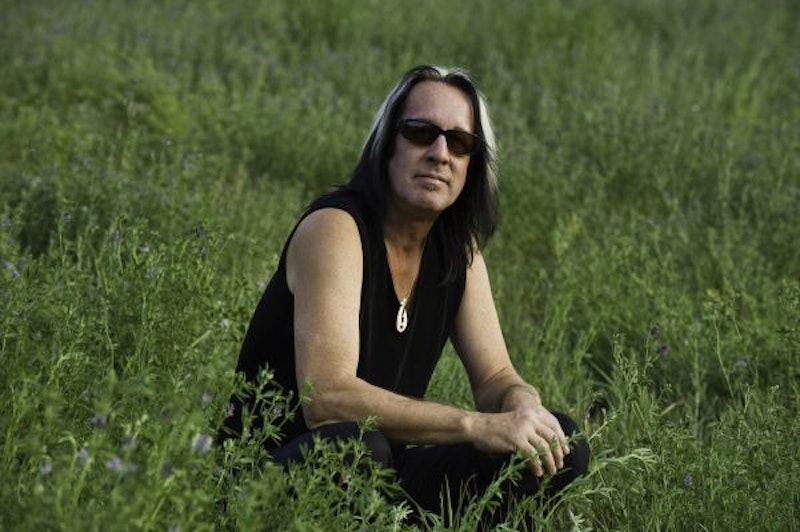 Signs for 100.7 The Bay, one of Baltimore’s meat-‘n’-potatoes classic rock stations, adorned the empty upper levels of Rams Head Live downtown on April 14, the night when the current leg of Todd Rundgren’s Arena Tour hit town. The Rams Head is a midsized venue in a relatively small city, part of Baltimore’s ongoing Harborplace gentrification effort Power Plant Live!, and hosts an accordingly varied series of acts built mainly around regional cover bands (Get the Led Out, Bruce in the USA) and commercially viable indie fair like Santigold, The Shins, and Modest Mouse. Its promoters are going for the largest possible audience, in other words, which made Rundgren’s appearance an odd choice; he’s a road-tested veteran with a four-decade career and a slew of hit singles, but the crowd, while fervent, didn’t even fill the place to half-capacity. Still, Rundgren delivered the goods you’d expect from a concert sponsored by The Bay, barreling through a loud-as-hell set with his four-piece backing band, mixing in a little onstage banter about going back to the good old days, running to the front of the stage during his roaring solos, and punctuating his snappier songs with some markedly less acrobatic versions of his trademark leg kicks and spins.

Rundgren’s music sometimes sounds an awful lot like other people’s—in his heyday he even consciously composed songs in the style of classic Motown, the Beatles, Laura Nyro, and Hendrix—but his career resembles no one else’s, and I don’t necessarily mean that as a fan’s compliment to a misunderstood genius. Rundgren has covered just about every possible base musically without ever solidifying a recognizable legacy. He had great and continued radio success with blue-eyed soul classics like “Hello It’s Me,” “Can We Still Be Friends?” and “We Gotta Get You a Woman”; played to gigantic crowds during his time fronting the prog-pop group Utopia; enjoyed a left-field novelty single in 1983’s “Bang On the Drum All Day”; and then released a series of increasingly strange and technology-reliant records over the next two decades, including a greatest hits album where he reworked old tunes as bossa nova songs.

He is also—and I use this term as honestly as possible—a visionary. Not only because he released a vocals-only pop album (A Capella from 1985) years before Björk made it artsy and cool to do so, and not only because he was using the Internet to self-release material more than a decade before Radiohead. In a much more persuasive, meaningful way, Rundgren was at his most inspired in the early- to mid-70s, when, in sequence through Something/Anything? (1972), A Wizard, a True Star (1973), and Todd (1974), he perfected a mix of rock, soul, and individual self-expression that was rivaled only by Stevie Wonder at the time, and which has since been challenged only by Prince. But Rundgren’s weirder than either of those two prodigies (and, like them, he’s recorded entire records by himself), and these albums feature outré sonic experimentation, id-obsessed lyrical forays, and genre experiments to match their face-melting guitar work and accomplished ballads.

From these records alone, Rundgren could have been any number of things to a lot of different music fans—an ace songwriter and celebrated link between the Beatles and Prince; an iconoclastic experimenter who didn’t rest on his popular success; a guitar hero to stand with Page, Clapton, and the rest of the Guitar World Magazine crowd; a power-pop progenitor and balladeer akin to Big Star’s Alex Chilton. (He was also a prolific record producer for artists as varied as Patti Smith, The Band, XTC, and Meat Loaf, for whom Rundgren produced Bat Out of Hell.) Instead, the ongoing classic rock success of “I Saw The Light” and “Hello It’s Me” has whittled a legacy for Rundgren somewhere between Boston and Steve Miller. Too bizarre to transcend his prolonged cult status and reach Fleetwood Mac-level popularity, but too popular and not edgy enough to become a music snob benchmark like Chilton or Lou Reed, Rundgren’s neither in the Rock and Roll Hall of Fame nor a likely candidate for a late-career renaissance a la Dylan or Paul McCartney. As the Baltimore gig showed, he plays nightly to fans for whom, to borrow their unironic phrase, Todd is Godd, yet the room remains half empty.

Watching a slightly chubbier Rundgren do guitar windmills during “Love of the Common Man,” his bleached hair waving around as the stage lights reflects off his sunglasses, it’s clear that he regrets nothing. He may have dabbled in synthesizer noodling and sound effects during his stranger 70s moments, but the man doesn’t have the slightest trace of avant garde impulse in him. An unembarrassed hippie and romantic, Rundgren has always performed zealously—dressing in sequined unitards, painting his eyes with glitter, holding out the mic for a crowd sing-along—and he continues in this tradition today, albeit more reservedly, as if punk never happened. He takes an obvious pride in pleasing his audience, and hasn’t, even at his most iconoclastic, ever succumbed to mere artistic stubbornness.

But for better or worse, stubbornness is a valued commodity among record collectors and harder-core canon nerds—the people who, equally stubbornly, equate serious music fandom with a knowledge of pop tradition beyond that on radio stations like The Bay. Thus one struggles to find a single chronologically post-punk band who lists Rundgren as a major influence, unlike the Great Stubborn Solo Artists—Dylan, Neil Young, Elvis Costello, Reed and Chilton, even Tom Waits or Scott Walker—whose influence seem limitless.

Rundgren’s Baltimore stop, which by all accounts was similar to the recent shows in support of his 2008 album Arena, would do little to persuade those heretofore unconvinced of the man’s greatness. In the middle third particularly, the band played through some pretty faceless butt-rock that wouldn’t be out of line at a State Fair gig. And Rundgren’s current touring lineup, while featuring Utopia bassist Kasim Sulton on keys and guitar, doesn’t play as nimbly as that older group, going instead for pile-driving force. But the crowd loved it, and that’s always been Rundgren’s intent, from at least back when he printed the names of all his fan club members on a poster included in the first pressing of Todd. He closed with fan favorite “Just One Victory,” and shook hands and tossed his guitar picks as he walked offstage, signing outstretched LPs in the process. And it was a certain kind of inspiring fun to watch a 60-year-old man and living legend do partially arthritic leg kicks and belt a heart-on-sleeve anthem like “I Saw The Light” as if doing that kind of thing never stopped being cool.