The Based God delivers his best work yet. 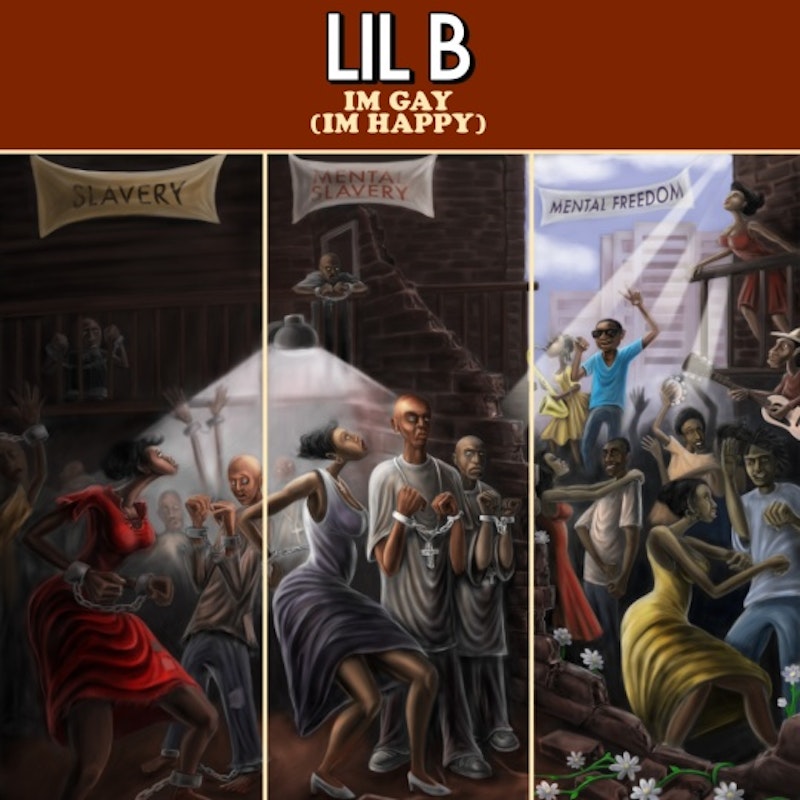 Lil B recently dropped his most anticipated album, I’m Gay (I’m Happy), offering it for free and in his own words, “making Hip Hop history.” Lil B is not gay, but it’d be a mistake to assume this is a gimmick. Lil B has been proselytizing as The Based God for years now, and if there’s one thing to take away from the thousands of songs he’s released for free, it’s that he doesn’t believe in taking words literally—he believes in the power of people to affect change through positivity.

Lil B, nee Brandon McCarthy, is more of a conceptual artist than an emcee, and for my money, he’s the first artist since The Beatles to really change the way the music industry works (and offer a model for the future). If that seems like high praise, it is—he might not be anywhere close to The Beatles level musically, but he’s a revolutionary mind in the same mold as the quartet from Liverpool.

Lil B’s career has been built on interacting with every single one of his fans through Facebook, Twitter, and hundreds of MySpace pages (he claims to spend 18 hours a day on the Internet, which, if anything, seems like a low estimate), releasing music (for free) at a super-human pace, and tackling issues other rappers can’t/won’t touch with the sort of subtlety that only reveals itself after you’ve entered into a relationship with his music. For lack of a better word, Lil B is the most conscious rapper hip-hop has ever seen, and his incredibly loyal fan base is a testament to the success of his techniques.

None of his tactics would matter if the music wasn’t good, and I’m Gay (I’m Happy) is some of the best music Lil B has released to date. His flow is still somewhat stilted, (he’s no Rakim), but his style works well with the alternating airy, near-psychedelic indie samples and lush soul-sampling beats that litter I’m Gay. “Game” whips a sped-up soul sample and a strident bass line into a fervor, kicking off his verse with a nifty apartheid/sharks lie coupling. “Unchain Me” samples M83, and B takes the familiar “nobody believed in me” rap trope and turns it back on the listener—if nobody believes in you, at least Lil B does. A line in “1 Time Remix” might as well be his motto “Respect everybody/get shown respect.”

That’s part of his genius, and why I’m willing to give him a pass on not actually addressing sexuality anywhere on I’m Gay. Lil B claims to represent everyone, and as The Based God, he doesn’t discriminate based on race, creed or gender—he’s gay, he’s straight, he loves his cat Keke, he loves Tacoma, Washington, he loves everything except the glorification of the ghetto, even if he’s not sure he loves himself. As Lupe Fiasco highlighted in his glowing review of I’m Gay, the most poignant line in the whole album might be "The Hood Is A Lie!"—something you’re about as likely to hear a rapper say as “I’m gay.”

Other highlights include “I Hate Myself,” which improbably screws a Goo-Goo Dolls sample and “I Seen That Light,” where B positions himself as a teacher, antithetical to so many rappers who are “scared to make a difference.”

The cover art is also pretty stunning, re-contextualizing Ernie Barnes’ famous painting Sugar Shack into a thoroughly modern triptych. Originally shown in 1973, the painting was meant to evoke the beauty and challenges of life in the ghetto, which while not Lil B’s only theme, is certainly a major one. Most famously, the painting was adapted for the cover of Marvin Gaye’s I Want You, and The Fader did an excellent job summing up the rest of I’m Gay’s influences. As they said, even the cover weirdly/smartly never directly addresses sexuality beyond the title.

Lil B is trying to downplay the meaning of words—something that is hard to grasp out of context while simultaneously using words to inspire individuality. He is accessible, instantly engaging, but there’s a depth to his songs that allow them to speak to not just one demographic, but anyone curious enough to give a listen to an artist some have dubbed "the human meme."

It does bear repeating that Lil B isn’t the world’s most talented emcee, he has a bit of a mush mouth and topical ADD—sometimes trailing off mid-line, and he doesn’t write the kind of verses that make you want to learn every word and rap along to. None of these songs are likely to receive radio play, but that’s not B’s domain anyway: he’d rather rule the Net.

I’ll never forget his response to my charge his music was misogynistic and his rush to brush it off: “I’m a human so don’t hate me.” How could anyone? I’ve come love and respect you—even if I’m not buying the fact you’re human. You are The Based God. You are Dior Paint. You are Lil B. You are Brandon McCarthy and this is your best work to date.