The band's current lineup plays the best white soul you'll ever hear in an indie club. 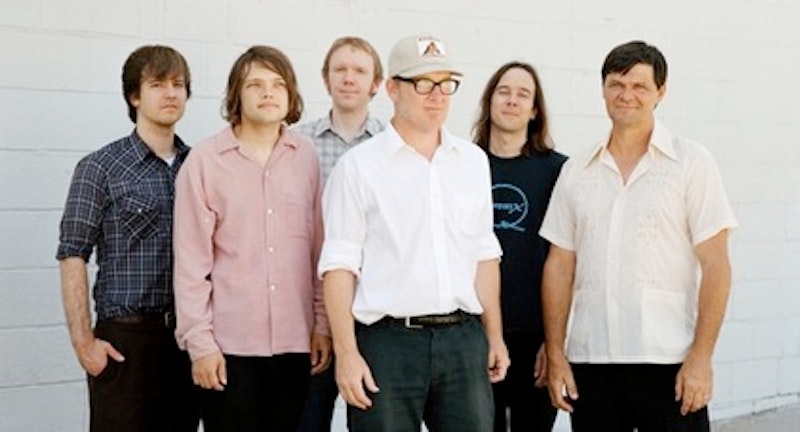 Lambchop, the Nashville collective surrounding singer-songwriter Kurt Wagner, embodies just about everything I could want from an American rock band. Since their recorded debut in 1994, the band has swelled at times to encompass over 20 musicians, making albums in the process that range from heavily orchestrated lounge-country (Nixon, from 2000) to sparse, ornate folk (Is a Woman, from 2002). Those two records are my favorite of the band’s, yet Lambchop has since moved away from their panoramic sound and settled into a core six- to eight-man group, tightening into an airtight country-soul combo in the process. Lambchop is currently touring behind their 2008 record OH (Ohio), and a recent show at Washington D.C.’s Black Cat showed that, whatever sacrifices the band has made in sheer widescreen power, they’ve retained the qualities that make them one of the country’s most unique and exciting bands.

Lambchop has always understood that country and soul music are separated by only the thinnest of lines—the one that separates black American culture from white—but usually they acknowledged this by placing the genres side by side on the same record; 1998’s What Another Man Spills, for example, flows from Wagner’s own ruminative acoustic songs to a monumentally funky cover of Curtis Mayfield’s “Give Me Your Love.” Lambchop circa 2008/9 just splits the difference. There’s no distinct twang on OH (Ohio), nor is there any overt funk, but the band still sounds both souful and folky—it’s a mixture of Dusty in Memphis and Bringing It All Back Home jangle.

At the Black Cat, the relatively small group—Wagner on guitar and vocals, accompanied by his longtime collaborators Tony Crow, Matt Swanson, Scott Martin, William Tyler, and Ryan Norris on piano, bass, drums, electric and acoustic guitars, respectively—flew through most of the new record, along with a couple Nixon jams and a lovely version of Dylan’s “You’re a Big Girl Now.” The collective musical prowess of this band simply can’t be overstated; even though they’ve spent their entire career on venerable indie Merge Records, and though their early music particularly shows a definite punk influence, Lambchop is decidedly a Nashville band, with all attendant expectations of consummate musicianship that description entails. Swanson’s bass playing in particular is astounding live; for better or worse, the group’s studio albums are so impeccably mixed and balanced that it’s sometimes hard to discern just how creative and melodic his playing can be. Crow’s piano has been more routinely featured on record, and in concert he doubles as the McMahon to Wagner’s Carson; with Lambchop, you apparently get expert stage patter to go with your flawless fingerpicking.

The band no longer freewheels from genre to genre like they used to—their repertoire of covers can be sampled on their current tour-only CD Rainer on My Parade, which includes songs by East River Pipe, Leonard Cohen, Teddy Pendergrass, Lee Hazelwood, and Rodgers & Hart—but you’d be hard pressed to find another group this musically knowledgeable and comprehensive masquerading as an indie rock band. And that’s the essential greatness of Lambchop, who manage to display a post-punk sensibility of fractured lyrics and musical dissonance without sacrificing musicianship or their place in a larger American artistic lineage of folk, soul, classic pop, and early rock ‘n’ roll.

And what kind of recognition can a band so quintessentially, proudly American expect to find? Apparently they’re huge in Europe, while their D.C. tour stop didn’t even take place in the Black Cat’s main hall, but in the club’s 200-capacity Backstage venue. I’m not one to waste time decrying a great band’s lack of popular success, but in this case it’s more confusing than anything else. During Lambchop’s uptempo rendering of Wagner’s collaboration with X-Press, “Give It,” when the band worked into a stomping frenzy and the singer pulled out a few lines from the Talking Heads’ “Once in Lifetime,” when they once more managed to pull at least three separate strands of American music together and do so perfectly, I silently wondered: what more, exactly, could this country’s serious music fans ask for?