Contrary to the anti-hype, 2009's Ultraviolet is a masterpiece. 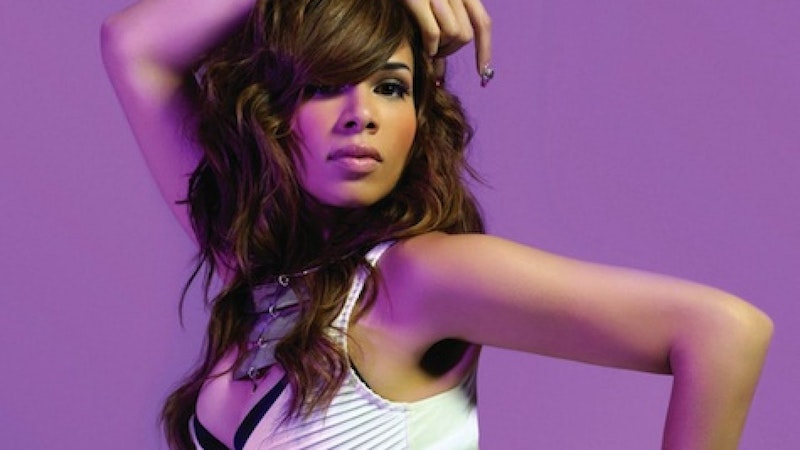 Chicago rapper Melisa Young, aka Kid Sister, was the footwork pop explosion that wasn’t. Back in 2007, Kanye West picked up the single “Pro Nails” for a mixtape and added his own verse. The song’s party-shout slang rap couplets (“just 10 dollars, matchin' colors/get your boogie on flex and holla/free beers into the evening/looks so tight/toes are gleaming”) were a brassy hip sensation, and critics and fans waited on the dance-floors eagerly for the album to drop. It took two years, though, and by 2009 anticipation had turned to indifference. After that buildup, nothing but a masterpiece would do, and since Ultraviolet wasn’t considered a masterpiece, it quickly sank from sight, along with Kid Sister’s career.

Which is too bad, because, contrary to the anti-hype, Ultraviolet is kind of a masterpiece. Chicago footwork, with its obsessive Reich-for-five-legged-breakers iterative beats has over the last decade embraced its avant-garde inclinations; the most famous practitioner these days is the resolutely experimental Jlin, whose twisted electro-vibrations skitter out to the edges of experimental composition. But Kid Sister and her overstimulated producer A-Trak had a vision of one nation under juke. The album comes popping and shaking and shaking and pop-pop-popping out of the South Side ready to paint, manicure, and conquer the world.

Ultraviolet doesn’t express its ambitions through stylistic or lyrical breadth. Kid Sister and A-Trak know what their audience wants, and they’re happy to deliver dance anthems on demand, from the neon-synth feeling right “Right Hand Hi” (“I put a little hurtin’ on you/and I do it in some heels”) to the coulda-been-a-video-star boasting of “Life on TV” (“smile to the camera/don’t pat your weave”), onto the electro-thump all over the floor of “Step” and the sparse beat box RUN-D.M.C.-with-hips of “Get Fresh.” Each track shakes into the next with a little ecstatic erotic rush. “Let Me Bang 2009” ends with Kid Sister declaring herself “famous in a Hyundai!” Her giggles lead directly with a perfect missed beat into the triumphant intro of “Pro Nails”—“Got her toes done up with her fingernails matching.” You’re not sure whether to laugh or cheer.

Kid Sister’s flow is more early-1980s than 2000s, but she bobs in and out of the layers of production with relentlessly provocative cheer (“all my features are bright like strobelights!”) and a ping-pong pacing that embodies that footwork jitter if footwork jitter wanted to rock a body. Her singing is solid too; the one sort-of ballad, “Daydreaming,” turns her into a sunny girl group chorus, innocent doo-woppers digitized and beamed around the club at the speed of bass and treble.

The most explicitly footwork track on the album is “Switch Board,” in which sex and dance continue their long popular music intercourse: “Gotta get your mind right/ Gotta get your game tight/If you want to juke her.” The track reaches RP Boo levels of bang bang jerk jerk as Kid Sister slings nursery-rhyme nonsense slang over beats programmed by amphetamine powered chipmunks.

That should have been it. In a more just world every “what you say now?” through the 2010s would’ve been followed by a “Coca-Cola shape!” and everyone from Miley to Cardi B should’ve dropped an obligatory footwork track and/or album. Instead, if you want to hear Cardi do juke you’ve got to check for semi-licit remixes, and Kid Sister vanished into that obscurity reserved for one-hit wonders and one-time Kanye collaborators. Critics tell you Ultraviolet is derivative dreck—just another forgettable bubblegum dance album. But in the whole South Side, no footpop album has its toes done up better.