I Miss Everything I'll Never Be

Dreams of being a rock star persist long after teenage years have passed. 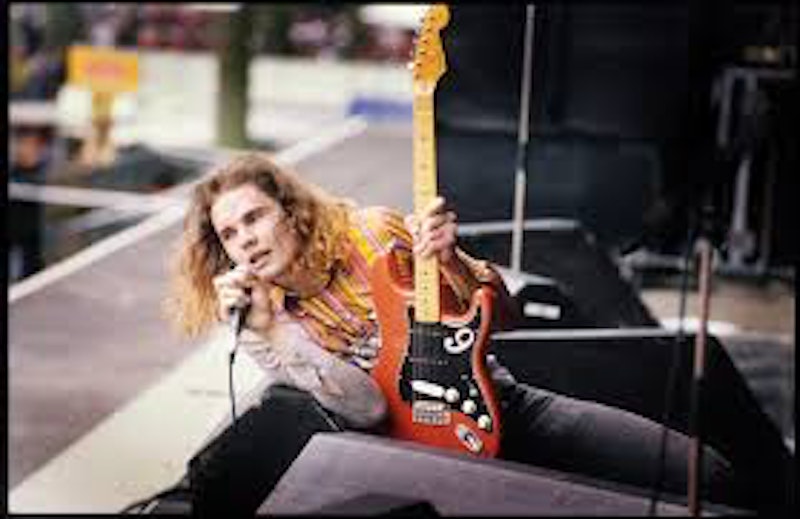 I still dream about being a rock star, despite being 38 and having no musical talent. I walk onstage with a guitar in hand, a row of effects pedals on the floor, and a crowd of adoring fans screaming out my name. For the next hour or so, I unleash every ounce of rage, sadness, and yearning buried inside through songs to which the audience knows every lyric. As the last song ends, I smash my guitar to bits, throw the remnants to the audience, and walk offstage with feedback reverberating at full volume throughout the venue.

Trying to learn how to play guitar at 16 squashed all my rock star aspirations. I bought a $200 Ibanez/small amp combo package and started taking lessons in the hopes of being able to shred like Billy Corgan overnight. It didn’t happen; I couldn't switch chords without pausing and delicately putting every finger on the right fret, tune the guitar right, or get the amp to sound like Corgan’s guitar on Siamese Dream. (I eventually learned I need a Marshall stack, hundreds of distortion pedals, and 40 overdubbed guitar tracks to get that sound.) Four years later, I sold my gear at a yard sale for $100.

Yet the dream persists. To be a rock star is to be noticed; your face on every website, your name trending on Twitter, your infamous reputation preceding you. Parents, religious leaders, and conservative pundits wring their hands over you corrupting their children with a message of non-conformity and free-thinking. You leave a trail of destroyed hotel rooms and audio equipment wherever you go. Every previously unavailable thing is now yours: women, money, drugs, popularity.

When you’re a misfit kid growing up in a town that offers nothing but cornfields and school bullies, nothing is more desirable than being a rock star. Watch any old episode of VH1 Behind the Music and nearly everyone started off as alienated youth whose only sense of belonging came from their record collections. Eventually they learn to make music of their own, create communities of fellow freaks, and become a god to a million disciples.

Writers are boring. Apart from the late Hunter S. Thompson, writers usually don’t throw TVs out of hotel room windows, smash up audio equipment at readings, or do enough drugs to make Mötley Crüe blush. Yet even my dreams of being a successful writer are mixed with rock star fantasies. I imagine one day going on either Real Time with Bill Maher or the Joe Rogan Experience and doing something outrageous to freak out the anti-woke establishment, like waving a Palestine flag in front of Bari Weiss, calling Maher a racist hack, or taking a crap in Rogan’s studio. It’ll be my statement to the world that the freaks will eventually inherit the earth.

It’s not enough to be free; I need the status quo to see I’m free. I need the people who called me a freak in high school to see that I love being a freak. Rock stars love reminding haters how much they don’t care; Taylor Swift practically made a career out of it. If one really doesn’t care what the public thinks, why put so much effort reminding us? Maybe, deep down inside every rock star, that lonely and insecure misfit kid still exists.

A rock star can be a hero or villain. The protagonists of the concept albums Tommy, The Wall, and Antichrist Superstar start off as rock star messiahs, but eventually turn into demagogues. It’s easy to see why; when you’re that influential, you can coax anyone to do anything. Rock stars often abuse this power. The list of abuse allegations against Marilyn Manson keeps growing. Ryan Adams groomed young girls by promising to advance their careers, only to tear them apart when they refused his sexual advances. Folk singer Peter Yarrow allegedly used his celebrity to fiddle about with underage girls.

I stopped podcasting three years ago, but I’m still friends with all the people I met through it. The love they show me when we meet in person overwhelms me. Which is why I wonder when I’ll disappoint them. It won’t be because of sexual misconduct—I’ve never even attempted to hook up with anyone at a conference—but probably because of something stupid I’ll say on social media. An ignorant comment that’ll lead to a mass exodus from my friends list. Maybe it’s better to be a nobody.