The Voidz’ Tyranny equals the anti-Strokes. 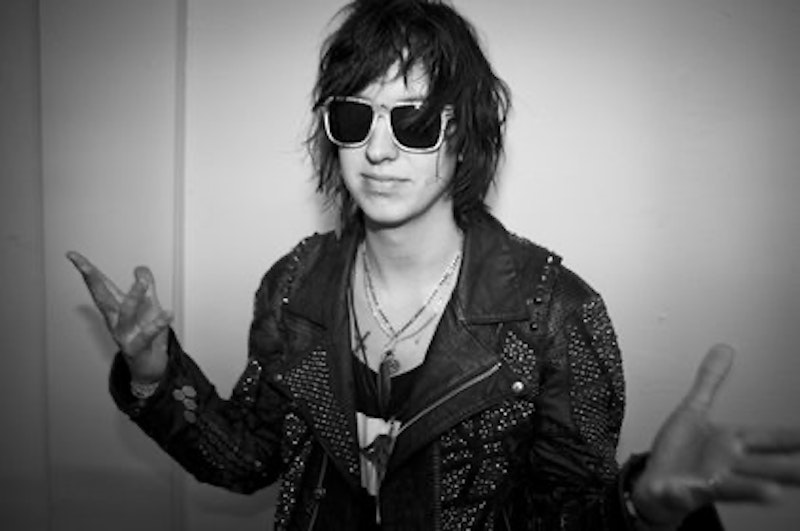 Some truths are immutable. Never scan the comments on articles. Don’t dare to feed Mogwai after midnight. Jean jackets with violently removed sleeves are eternally fashionable. Cool remains mysterious and elusive. Julian Casablancas’ song lyrics aren’t meant to be read. Sure, the words to “Human Sadness” may be parsed in full online, but I’d strongly advise against searching for them; no, instead, listen to the song. It runs for 11 languorous minutes, by turns lightheaded, gnarled, noisy, ethereal, unguarded, punch-drunk on its own sense of grated grandeur. It’s operatic on a Queen scale, lost in the cosmos a la Pink Floyd, bathed in cathode-ray electronic effects reminiscent of Oneida’s A List of the Burning Mountains, casting of majestic guitar leads. Then there are the words, the vocals: slurred, floated, phased, celestial, scoured, shredded like the Urban Outfitters version of the Ultraviolence LP art, idly finger-painted, diffused and then sharpened. None of it scans as affectation; most of it is willfully, fascinatingly intelligible.

“Human Sadness” is the cornerstone around which Casablancas and a new band, the Voidz, have fashioned a debut album Tyranny (Cult). Tyranny finds Casablancas light years removed from the fussed-over fastidiousness of The Strokes and popular notions of cool. It is cool—a sort of robotic polish—that defined the Strokes from their celebrated emergence onward into an increasingly awkward middle age. But what’s cool and what’s interesting do not necessarily co-exist sonically, and it’s hardly an exaggeration to think of The Voidz as a sort of anti-Strokes in this regard. If Is This It, Room On Fire, and, say, Angles are the semi-modern version of “hip older brother” records—we’ll leave First Impressions of Earth, where the Strokes were momentarily interesting, aside—then Tyranny is the resolutely “wayward younger brother” album you’re supposed to be totally embarrassed to actually own, the platter that makes much more sense in the context of holing up in a dark bedroom alone in thrall to cheap drugs. (The horrible, woodcut-resembling cover art helpfully re-inforces this abject wrongness.)

The Strokes are the sound of uncut cocaine. By contrast, the Voidz are the sound of everything else your girlfriend’s dealer had left to offer, all at once, sideways, dive-bombing clear-eyed towards the bottom of a well yet in total, Drunken Master control. But what does this mean for discerning listeners? It means that “Father Electricity” can get away with fusing frantic Afrobeat percussiveness and fusion jazz vigor and guitar felicity straight outta Hope Chest-era 10,000 Maniacs as Casablancas scats like some kind of madman. It means that the trashy “Crunch Punch” may lurch in and out of neutral, derailing itself in a multiplicity of ways, call a 30-second sidebar mid-way through for one of the year’s most satisfying melodic detours but then never refer to it again while descending into hypnotic, oddly-tuned rhythm riffing while the singer tries to decide whether he’s Marvin Gaye or Lou Reed. It means that it’s okay to plow through a sort of speed-grunge number about a business dog called “Business Dog.” It means that it will probably be necessary to listen to “Nintendo Blood” four or five times to adjust to its hinky throwback FM schizophrenia and understand why so many other people swear it. It is to accept and be okay with the fact that you don’t really know what this album is about, and that Casablancas probably doesn’t really know, either.

Tyranny is the kind of album that complicates constructions like “art-prog” or “art-rock” or “metal” or “white dudes dicking around with Eastern harmonies like they invented it” and forces you—dares you—to earn an understanding of it. Is the initial, cluttered muddiness of “Dare I Care” the destination to those finely filigreed hooks at its core, or a journey worth savoring, in and of itself? In a more sterile environment, would the Thin Lizzy skronk “Johan Von Bronx” have worked as a Strokes song? Should it have been a Strokes song, after all? Is the stout, sharp rhythm section of “Where No Eagles Fly” essentially in ideological combat with the fist-waving rawk rage of the chorus? Your enjoyment of Tyranny will likely correlate with how heavily some of these questions weigh on your mind while this album is spinning, and whether you feel particularly inclined, in the early going, to switch this off and revisit “Last Nite” for a billionth time. It’s cool if that’s what you need, but we’ll be over here in the corner, losing our minds.