More from the proto-punk years: The Five Americans' "I See the Light." 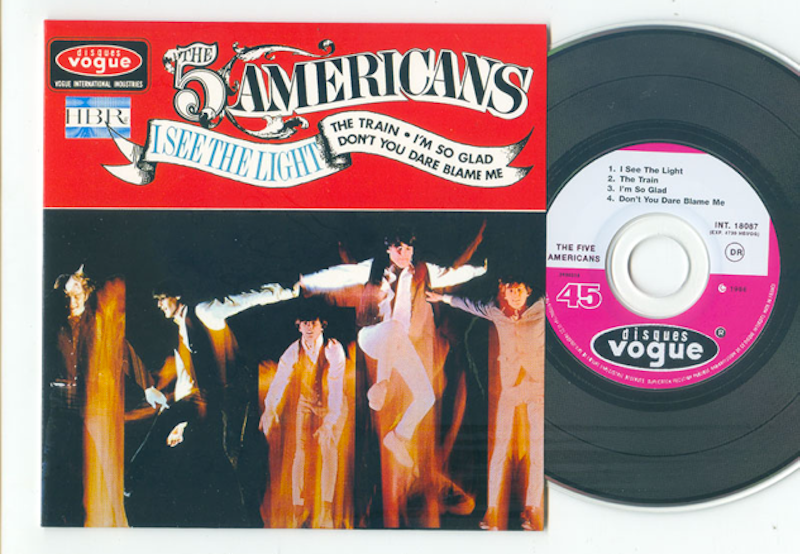 The chronological ground zero of America's 1960s punk explosion came in ‘66. That year saw one-hit wonder bands from every backwater burg, big city, and suburb pummel the nation's pop charts with blasts of growling, stomping rock 'n 'roll. “I See The Light” by The Five Americans was among that destructive torrent of '66 punk singles to blow the roof off high school dances and teen clubs during the height of U.S. punk's mainstream popularity. With its screaming organ swells, deep guttural vocals, and clashing melody lines, the song broke free from punk's musical parameters while keeping all of it's primal ferocity intact. The fact that The Five Americans could then pull off an entire album of their tough teenbeat sounds without even a bit of filler puts them in a category all their own as both punk legends and visionary songwriting geniuses.

The first album by The Five Americans was titled I See The Light and released in the wake of that song's top 30 success of late ’65/early '66. Though originating in Durant, Oklahoma, the band gained their initial break in 1964 after relocating to Dallas, TX, and discovered by John Abdnor Jr., whose father was a millionaire and a local entertainment impresario. Even at this early time Texas was already teeming with some of the most popular and savage punk groups around (i.e. Roky Erickson's early band The Spades, The Sir Douglas Quintet, Jimmy Vaughn's teen combo The Chessmen, etc.), so the Abdnors saw a chance to cash in on the burgeoning hard rock trend by financing the release and promotion of a single and an album by The Five Americans. The Oklahoman ex-pats didn't disappoint: I See The Light epitomizes The 5's reckless abandon with their punk roots most proudly displayed via the title track, “Don’t Blame Me,” and “It's A Crying Shame,” while the their mutated covers of  “Twist & Shout” and “What'd I Say” sound more like their own stripped-down original songs than any kind of r' n 'b tributes.

With the 1967 success of their top 15 hit “Western Union,” The Five Americans would become synonymous with sophisticated harmony-driven pop and elements of that sound were already in place here in the song “I'm So Glad” (no relation to the Cream tune), as well as a solid Byrds/George Harrison-type folk rocker called “I Know They Lie,” and the bouncy ultra-short garage rocker “She's-A-My Own.” The more melodic sides of the group were evident in esoteric tracks like “The Train,” “Goodbye” and “The Losing Game,” all of which provide a rough Texan take on the sound of Buffalo Springfield and other proto-hippie rock groups. This appropriately short punk-length set also includes the “I See The Light” single's b-side 'The Outcast,” a folkie dirge that absolutely snarls with downtrodden vocals and beatnik poetry: "Take a man, take a face, take sorrow, take disgrace and you know you got me/Take a bird in your hand with no place left to land and you know you got me/Take a man wearin’ a frown with no feet on the ground and you know you got me..."

The Five Americans’ I See The Light is the latest in a long line of seminal albums to receive top-notch reissue treatment from the storied Sundazed record label. That bold sound is just as striking as the album’s garish red, white, and blue cover art, complete with an outrageous color band shot—a psychedelic photo manipulation that makes each of The Five Americans look as if they're engulfed in flames jumping through the air like human sparklers. Just like a sparkler, the band's white hot intensity lasted just a short time before burning out: by early '67, “Western Union” (and the album named after it) would provide the group with bubblegum superstardom and that record's follow up “Progressions” pushed them even further away from the teen clubs and into a realm of heavy acid rock and baroque pop.

Though melodic fireworks and hallucinogenic pomp may have put them at pop music's forefront in the psychedelic era, The Five Americans' early sounds will always be celebrated by 60s punk cultists thanks to that spark of mythological greatness known as “I See The Light."