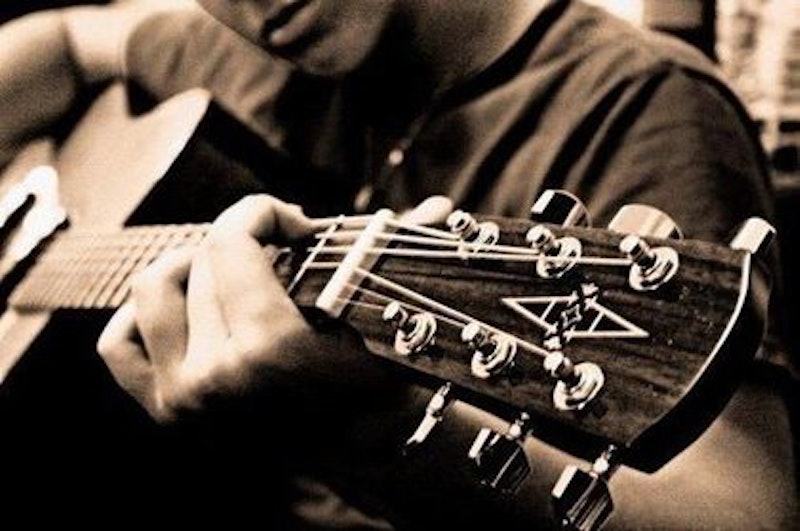 Last week, I interviewed ambient music producer William Kurtis Chang, better known as WKC. I met with him in New York’s Lower East Side to discuss acoustics, space, and the challenges of live performance.

Splice Today: What can you tell me about the origins of WKC? You got your start in music as a guitar player, correct?

William Kurtis Chang: The project began in 2007 when I was living in Baltimore. It sort of emerged from the last days of an old rock band that I was playing in. I had a laptop, and thought that it was time to make music with it. Starting out as a guitar player I had an interest in effects pedals, which continued even as I began playing bass guitar. I was content to play the effects for the sounds that they generated in tandem with the instrument. The extension of that interest in individual effects sounds was to get into full-on production, to tinker with sound itself instead of being limited by the physicality of strings or the physics of other acoustic instruments. If I had been able to play every acoustic instrument in a band for my solo endeavors I would have done that but I couldn’t.

ST: What key difference is there between working in a band with acoustic instruments versus taking on technology?

WKC: To me, being in a band means that everyone pitches in his or her own opinion. You’re creating something that is both a synthesis and compromise. It’s kind of like asking a group who’s never seen an elephant to construct one. That is to say, you’d ask each person to create a different part of the elephant based on what they think it looks like. As far as the question of taking on technology, I had been listening to electronic music for two-three years at the point when I decided to start creating my own. I found that it’s an opaque listening experience. You don’t know how the artist is doing what they’re doing. It was important for me to figure out what was going on behind the curtain of software and hardware though hands-on creation.

ST: I’ve heard more than once that the attraction of using a laptop for people who are not traditionally composers is the level of ease with which one can create complex rhythms and sounds. Did that thought cross your mind when you realized that you could or did not want to play every acoustic instrument in a room to make a composition?

WKC: Pretty early on I tried to stop replicating physical instruments with the computer. It’s not so much that I can do the same thing on a computer as a real drum set because it’s easier. I don’t think of it that way at all. It’s easier for me to explore different aspects of the sound and composition because you have direct access to that sound.

ST: Are you aware of a specific culture surrounding ambient musicians, in the sense of a DJ or rock music culture?

WKC: I think that there’s an expectation of what different kinds of music should be. That perception is different depending on who the observer is, whether it’s the audience of the producer/performer who is trying to sell something to the audience. With a rock band, as the audience you feel the need to see a rock star. As the band on stage, perhaps you feel the need to be a rock star. With DJ culture, which I admit I’ve had limited personal experience with, it seems to be more about the party and the crowd. If you are in the audience you expect a collective synergistic experience. As a DJ you create that experience for the audience. I read an interview with a DJ who said that before each set he’d walk into a room and observe the crowd in order to find out what would make them lose their minds.

With ambient music it’s a bit less of a live experience. That is to say, in my mind there is no single iconic listening experience. A lot of people expect music that is soothing or beautiful. I’m reminded of the movie 2001: A Space Odyssey and the posters that advertised it. The graphics sent the message that it was the ultimate psychedelic experience. To me, that move is about so much more than spacing out for a few hours. That to me is what the culture of ambient music is like. There’s an expectation of pleasantness or dreaminess when it could be so much more.

ST: So there’s a pigeonhole that’s been built much like those that appear in other genres? Perhaps it’s the ease of recreating easily identifiable yet specific sounds?

WKC: With music in general I feel that there emerges an association with some physical or psychological experience that they hope to revisit. As an artist you want to branch out and experiment. There’s some conflict of interest in that sense. Why did the Beatles stop touring? In becoming a studio band they were able to explore what rock music meant when you de-coupled it from the ritual experience of a rock concert.

ST: The Beatles example also lends itself to the question of technology advancements. If you watch Beatles videos from the 60s with them performing in a stadium, they are totally drowned out by the crowd. PA technology was a bit behind for that sort of presentation on that sort of scale. With electronic music the fidelity now is so high that the audience experience can essentially be that of total immersion. Do you consider the spaces that you play in before a performance?

WKC: I can’t really make requests about the spaces that I play in. It would be great to ask to play in a specific cathedral or a Parisian catacomb. I play normal venues like bars and coffee houses. There was a moment when I was on tour recently where I played on the patio of a winery in the mountains of South Dakota. It was a great time. In terms of demands when I play, I demand as little as possible from the space. If there is a speaker then I will play. All my equipment fits into a backpack so it is nice to break away from the solipsistic experience of hearing my music through headphones. I prefer that the music exist in different spaces. I’ve played through a seven-speaker array in a Chicago pizzeria and I’ve played through guitar amplifiers. A lot of times the music doesn’t sound as good as you’d think or as bad as you’d think. What I don’t understand is bands like U2 who take their entire performance environment around with them on the road, usually at huge expense. Why not just have the same concert at the same place repeatedly? I realize that it’s also about playing to different people, but at a point you’re selling the same exact thing to those other people. I can imagine that becomes boring for an artist.

ST: When I listen to your music there’s a distinct Tim Hecker and Christian Fennesz influence. There’s an almost cinematic element that shows up whether intended or not. Specific tonalities and the ways in which your source sounds are abstracted lead to a narrative. Do you consider narrative film or specific images when you compose?

WKC: I don’t write music while thinking of a soundtrack to an imaginary film. I like narrative fiction but don’t know if that necessarily figures into the composition of the music. When I play it’s largely improvised. In that sense, I think there needs to be a narrative to a live set since there is a definite start and end point. The period of time during which I play can’t be disorganized. Since my performances are improvised I need direction to figure out what to do next. By paying attention to the minute-by-minute evolution of the sounds I can find direction. However If I were doing an art installation or a 12-hour concert where people entered and left as they pleased it might be different.

WKC: Well, it depends on the definition of electronic. If a rock band uses a synthesizer are they then electronic? If they use a tape machine are they electronic? Does a drum machine have to be involved?

ST: I’d say that no sequencing or possible reproduction of the same sound source are part of the criteria.

WKC: Well, my favorite band of all time is Guided by Voices. In the studio they sometimes use field recordings. They start out as unexpected sounds but after a bit they fit in with the composition. The songs themselves are very brief units, which are collage-y and diverse. I also like Slow Dive’s approach to guitar. They use a lot of layered chords and melodies over the same guitar track. That has influenced my use of pitch shifters and delay lines.

ST: Do you have any releases slated?

WKC: I’ve got about a half hour of music that I’ve been attempting to build into a full-length. However, at this point I’ll just release it as an EP since time seems to move faster than I anticipate. It’s much more concise to just cap my particular train of thought at the moment. I don’t have the budget for vinyl but it will be in a digital format certainly. I was thinking about a cassette release. Even though it’s self-delusional to think about what format will persist over time I might as well go with a format that falls apart in an interesting way.

ST: Maybe you can pioneer the selling of damaged digital files.

WKC: That’s a possibility. I’ve thought about the question of copying a digital file over and over and at what point the quality degrades. If 40 percent of the material released in that format played back in an interesting way I’d be ecstatic.