The Scissor Sisters' latest hit, "Let's Have A Kiki," borrows directly from black gay culture—too bad their video doesn't have any color. 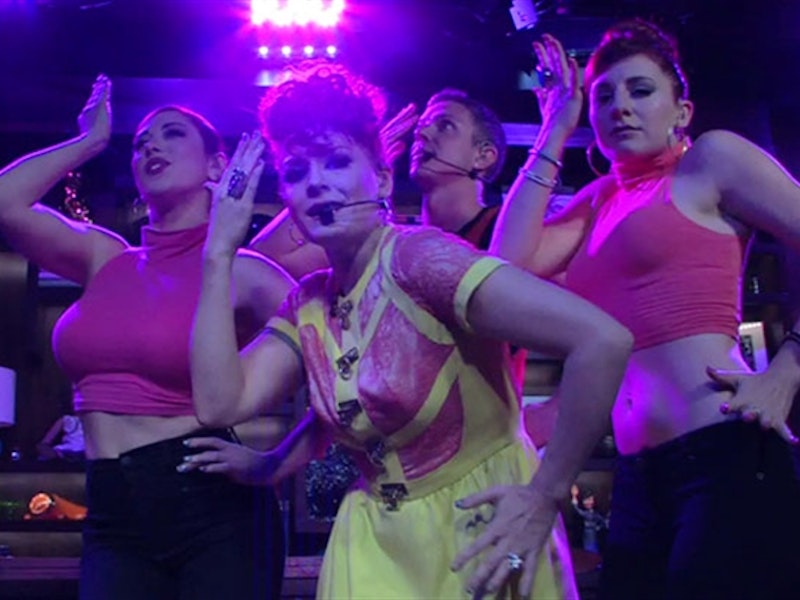 “Let’s Have A Kiki,” the surprise mega hit from New York dance punk outfit Scissor Sisters’ recent album Magic Hour, is one of those songs you only need to hear once before it’s bonded to your cerebral cortex. “Let’s have a kiki/I wanna have a kiki/Lock the doors, tight.” Fiiieerrrce! I was out last week at one of my favorite clubs on the Lower East Side when “Kiki” came on—and let me tell you, the kids were gagging, darling.

“Kiki” is a great song, full of the kind of gay anthem-y sass that will force even the popped-collariest, “no homo” pronouncing bro to squeal “Yaaaaaas!” But when I saw the music video for “Kiki,” which doubles as an instructional clip on just how people ought to “Kiki,” I got really annoyed. “Kiki” joins a long line of bitchy dance records with hard beats that lift black gay slang to the level of art—songs like the fascinatingly brilliant “Ima Read” by Zebra Kats, where the art of “reading,” or telling someone about themselves, makes up the whole song. There, Njena Reddd Foxxx promises you that her reads “Gon’ be cohesive. It’s gon’ be my thesis,” a sickening turn of phrase line that makes me go “yaass!”

As for “Let’s Have a Kiki,” the song’s foundation is the unique slang of black and Latino gay culture. “Kiki” has long been used to describe things like penises, vajayjays, and lesbigay hook ups. Today, “Kiki” is gossip. “Everybody laughs and kikis,” the great Dorian Corey says in Paris Is Burning. “Kiki” and “spilling tea,” two words that appear throughout the Scissor Sisters song, are specifically blatino gay speak for gossip. Sometimes I’ll call my friend and I’ll be like, “Girl, get your cup ready—I have some serious tea hunty!” When you listen to “Let’s Have a Kiki” closely enough, you’ll see that it isn’t so much a song as it is a bunch of phrases snatched off the top of blatino gay culture like a bad lace front. “Kiki,” “work,” “honey,” “spilling tea,” “serving”—these words are commonplace for anybody who has ever been to a vogue ball, seen Paris Is Burning, or who has ever been within an earshot of fierce gay people of color.

My point isn’t that other people aren’t allowed to use these terms. I don’t mind cultural appropriation as long as it’s cited in some way. Other pop artists have appropriated blatino gay culture to an authentic and positive effect. A couple of standout tracks from Azealia Banks’ recent mixtape Fantasea borrows directly from black gay culture, which is impressive for a rap artist. Her cover of “Ima Read” and “Fierce” are appropriated, sure, but we get her inspiration and she credits the black gay culture she’s poaching.

Unfortunately, “Let’s Have a Kiki” is as authentic as a package of hot pink Kanekalon jumbo weave.

I knew “Kiki” was by the Scissor Sisters, a band I really like, and I was excited they turned to black gay culture for creative inspiration. Watch the music video, though, and you don’t see a single person of color. Anywhere. I mean, how can you do a music video about serving, working and letting them have it and not show some fierce bitch from the blatino gay scene! Even the opening monologue of the song, where lead Scissor Sister Ana Matronic sasses off about how her party was ruined and now her weave is messed up, is said in an inflected black voice. Why didn’t they just get a cameo from somebody from the vogue scene?

This is not like when Lena Dunham didn’t cast any brown folks on Girls. That was about not thinking about brown people period. This is about stealing from brown people and not thinking about them, period. In the case of “Kiki,” queer brown folks are the ones who invented the terms that make up the entirety of the Scissor Sisters chart-topping song, and those faces have been completely wiped out. I’m willing to bet that the gays watching this video will have no idea where these words come from. But the reality is that these are terms that were created so that gays of color could communicate with one another in a clandestine way, and scholars like E. Patrick Johnson, Henry Louis Gates, and Geneva Smitherman have done research on the uniqueness and specificity of black (gay) speech patterns. For the Scissor Sisters to use and capitalize on black gay slang without paying due credit to the people who invented it isn’t appropriation—it’s straight up cultural larceny.

I’m not the only one who feels this way. I showed the video to a black gay friend of mine and he thought it was atrocious. When Gawker posted the video to its website, one commenter said, “What else will pop steal from the ball scene :(?"

Madonna stole “Vogue” after seeing members of the House of Xtravaganza voguing at the Paradise Garage, but at least she enlisted the help of José and Luis Xtravaganza from the famed House of Xtravaganza to choreograph that video. Cherie Lily’s addictive video “Werk” borrows from blatino gay culture, too, but it accurately reflects the diversity of the community with cameo appearances from important culture-makers from the scene.

I’m disappointed that the Scissor Sisters—a band on the edge of the queer cultural avant-garde with a lot of cultural and even queer subcultural capital—chose to present “Kiki” this way. They ought to know better. No tea, no shade. If any band could have given “Kiki” some legitimacy, it’s this one, and I can think of dozens people from the blatino gay cultural scene that the band could have invited to participate in their “Kiki.” I’m thinking of the albino model Shaun Ross, Paul Alexander, known for his club classic “Walk for Me,” the ever fabulous Leo GuGu or even the avant-garde performer Jonté.

A much better and more accurate video for “Kiki” is a brilliant, campy mash-up produced by the Boston-based party promoters Videodrome, which sets “Let’s Have a Kiki” to vignettes from old movies, and correctly includes cameos by RuPaul, Crystal Labeija, and Willi Ninja. “Let’s Have a Kiki” is a great song. It’s too bad the video doesn’t live up to the fierceness.