The Dustbin of the Hit Parade 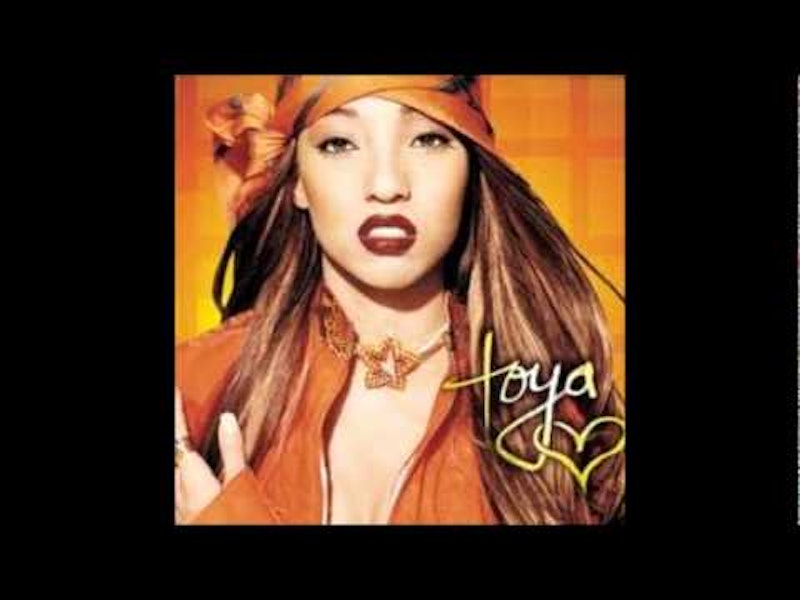 Has-beens are even more anonymous in some ways than never-weres. A truly obscure lost album at least has the hipster caché and validating mystery of its own obscurity. A pop star who's no longer popular, though, can hope for little more than de rigueur ironized camp appreciation and the occasional nostalgic bout of "whatever-happened-to….?"

Such is the fate of St. Louis singer Toya, whose single "I Do!!" reached the top 20 on the pop charts way back in 2001. The follow-up single, "No Matter What (Party All Night)" did nothing, though, and the self-titled debut album disappeared into obscurity and second-hand bins. Toya married football player and coach Tamaurice Martin and retired from the music biz. These days she can't even get any respect from the commenters on her own YouTube videos.

Which is a shame, because, contra the haters, Toya is one of the great R&B albums of the last quarter century—a disarmingly perfect blend of whimsical charm and strutting funk. "I Do!!", that hit single, is a fine example of the album's virtues. Produced by Bam and fellow St. Louis-native Ryan Bowser, the song is built around stuttering keyboards and syncopated percussion that lean flirtatiously towards Latin rhythms. Toya is hardly an overpowering singer, but her light vocals weave enthusiastically around the beat, alternately caressing and banging out the hilariously high-school-hip street lyrics. "He was the kind that made you wonder how he put down the love/He had a hickey in his pocket/a fat rock in his ear/He made my heart start palpitating/Every time he came near." The liner notes provide a glossary for each song, and a "hickey," apparently, is a pocket full of money. Not exactly what you were thinking.

The not-quite-double-entendre is typical. Toya's sexiness is always sweet rather than raunchy; more about crushes than coitus. When she titles a song "Bounce," it's not a metaphor for sex, but about encouraging an irritating suitor to leave her alone (complete with obligatory reference to then-huge Destiny's Child.) I suspect that this is part of the motivation for the YouTube haters; compared to contemporary acts like Nicki Minaj or even latter-day Rihanna, Toya looks like kids' stuff.

That sense of playfulness is a big part of the appeal as far as I'm concerned, though. "No Matter What (Party All Night)" is unabashedly cheerful: with crazily ecstatic washes of synth beats as Toya soars up to proclaim, "Maybe we might catch some guys eyes/If we don't, we don't care, cuz we still/Gonna have a good time," and the background singers go "Ay Oh Ay Oh" like they've wandered in from a Harry Belafonte gig. The song has some of the rapturous force of Prince's "1999," with the Dionysian apocalypse replaced by a smaller-than-life Afro-futurist vision where (as in the video) advanced technology is used to create insta-outfits and cute/clunky Jetsonoid space-cars. Bliss for Toya isn't an endless orgy; it's just hanging with your friends.

The rest of the album is just as good as the two singles. "You should tell the truth," Toya tells her straying boyfriend on "The Truth" over preposterously enthusiastic retro-disco Zapp & Roger samples so utterly unabashed that the song goes through self-parody and right on to heart-on-the-sleeve honesty. "Don't Make Me," with co-production by Toya herself, has an itchy, merengue sound which nicely matches its lyrics ("Don't make me/jump up/kick off my shoes"). And on "What's a Girl to Do," Soulshock and Karlin provide hyper beats and melodic tweaks as Toya muses over whether to choose the rich guy or the lover—before deciding with a throaty chuckle to "keep both of you."

Even the expected heartbreak ballad, Soulshock and Karlin's, "Moving On," is thoughtfully executed—not least because halfway through it becomes clear that Toya is singing not about a love who left her, but about one who died. "Now I know I will never love another for the rest of my life," she sings with all the multi-tracked sugar of radio pop, and the R&B clichés about how she's unable to move on, or how nobody can take your place, all seem to gain weight because of their own obvious inadequacy. The song reminds me a little of Quentin Blake's beautiful children's book, The Story of the Dancing Frog (http://hoodedutilitarian.com/2012/07/ribbit-means-goodbye/), in which a woman's dead husband is replaced by a dancing frog, and the ridiculousness of the substitution is, contradictorily, both what honors the dead and what comforts the living.

For many, it'll seem like a stretch to suggest that Toya has worthwhile thoughts about grief, or joy, or sex, or love… or about anything, really. Even compared to other pop performers, one-hit wonders don't have much of an auteur function. When you can't sustain a career past that first single, the assumption tends to be that it was a fluke, or that someone else (like Soulshock and Karlin, or Ryan Bowser) were the ones responsible.  I suppose that's possible, but the fact remains that Toya's debut is consistently funny, surprising, sexy, and funky in a way that hardly any of her peers, with access to the same producers and a lot more promotion, have managed. I doubt she'll ever make another album, but if she does, I'll buy it.