Dispatches from last night's U2 concert. 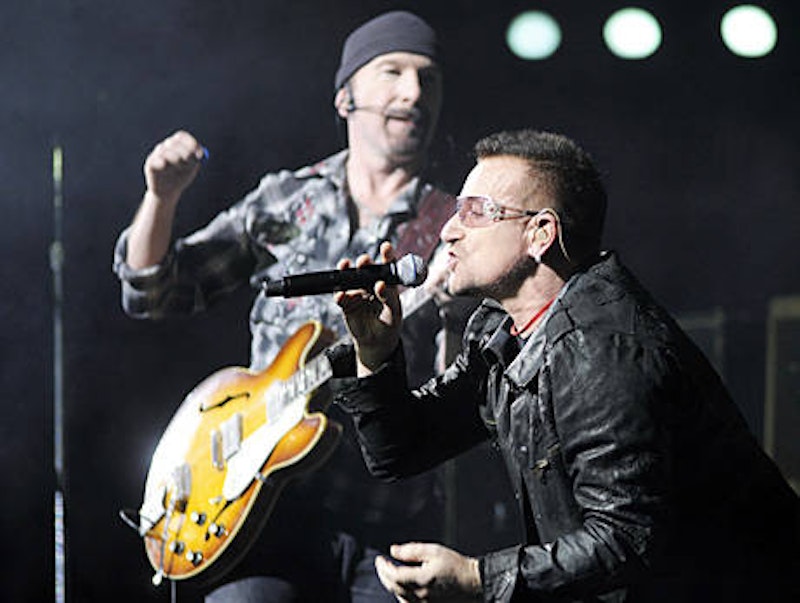 U2 played last night at the football stadium in Baltimore and they kicked some serious butt! Like wow! Here’s a recap from your correspondent (and fan… shhh don’t tell!!).

6/22/, 5 a.m.: Day Six of my M&T campout. I’m first in line and it feels great. I’m on a first-name basis with the stadium cops now. You see her? That’s Sheila. She let me use the stadium bathroom once, but she wasn’t too happy about that. Kinda made a mess in there the last time… Mostly though I just use this bucket; after all, U2’s all about conservation. I strive at all points in my life to adhere to Bono’s Way.

8:13 a.m.: Some more stragglers show up. They don’t even have tents… what is this, Green Day! Lawn chairs…Oh, these ones are such hipsters—ugh, hipsters. I hate hipsters. Right? They probably only know “Vertigo.” I happen to have every U2 CD. I like the greatest hits ones the most. It’s like a big bag of candy!! At least I’m the only one here with the U2-brand iPod.

10:20 a.m.: Wrong!! One of those hipsters had one. Must’ve got in on eBay or some cool indie place like that. Oh well, I threw it away. Haven’t you seen The Wire hipster bros? Baltimore is real. I’ll throw your Ray Bans away if I get the chance.

1:03 p.m.: Line’s getting longer. Is it rude not to talk to second-in-liners? I feel like as a first-in-liner I’ve earned it…They’re girls, anyway. Weird, right? Gross. FUCK. Is that the tour bus??

1:06 p.m.: Not the tour bus. Baseball team or something. IDK/IDC who they are. Where’s the Dublin Dynasty??

3 p.m.: U2 has arrived and I’m starting to freak out a little bit. The stage looks like the mechanical spider from Wild Wild West fucked a MacBook. How in the world do they power that thing?? Sooo cool. I can’t believe this is the most profitable tour of all time with that thing. What if Bono makes eye contact with me? Maybe if I wear sunglasses at night too he’ll notice me…Only three hours till doors.

7 p.m.: Hola!! I’m inside and this is really happening. I couldn’t bring any of my stuff inside but fuck it, someone else could use a laptop and clothes. It’s really hard to see with these wraparounds on. No thank you, Nancy Pelosi, I don’t want your hot dog…OMG is that Jim from The Office?

7:12 p.m.: There’s a kiosk for sponsoring poor African children…ooooh they have some actual real life ones here!! For $75 you get to be their sponsor, but for $300 you get to own one. You can rename them, dress ‘em up, basically be a Svengali and engineer a person. If only I hadn’t bought all those Twizzlers…wouldn’t it be funny to rename Tunde something like Iamafrican Butmypenisislittle? Heh…I should send that to Conan.

7:34 p.m.: I hate everyone. No one understands me. There aren’t any fans here. The bro next to me got tickets from his boss yesterday…I hope you choke on your jumbo pretzel. Do you even know what color The Edge dyes his pubes? Have you seen Bono’s shit in person, up close? I have. Is the art of being a true fan totally lost on these plebes? Is there no dignity in spending thousands of dollars and making a Haaj of it? Whatev…my Irish Idols are about to take the stage.

10 p.m.: YAAAAAAAAAAA! The Boys just finished their main set. WHAT A SHOW!! I’m due for a diaper change. Bono and his guards didn’t appreciate the shirt I threw at him though…maybe “FUCK ME LIKE AN ANIMAL” was a little too upfront for Mister Sensitive…Guards grab me. They’re taking me backstage. OMFG. Is this really happening?? What am I going to say?? I hope Bono likes my band’s demo.

6/24, 3:09 a.m.: Rude awakening. In B-No’s words, Donde esta?? Hmm. In a room full of starving African children and I’m the one with the Trail Mix. There’s like hundreds of them…omg. This isn’t pretty. Someone showed me a shank made out of toenails. There’s blood, shit, and hay everywhere. Smells like dookie. Who knew that the 360 Tour was fueled by African bone, blood, and sinew? Listen, honestly I’m glad. Now I get to put my whole self into something I really believe in. They say it only takes till mid-set to burn in the furnace. But hey, I’m a backstage VIP now, they need me…it’s a beautiful day!!!