The Oakland musician debuts two new cross-country collaborations and talks about the future of music in California. 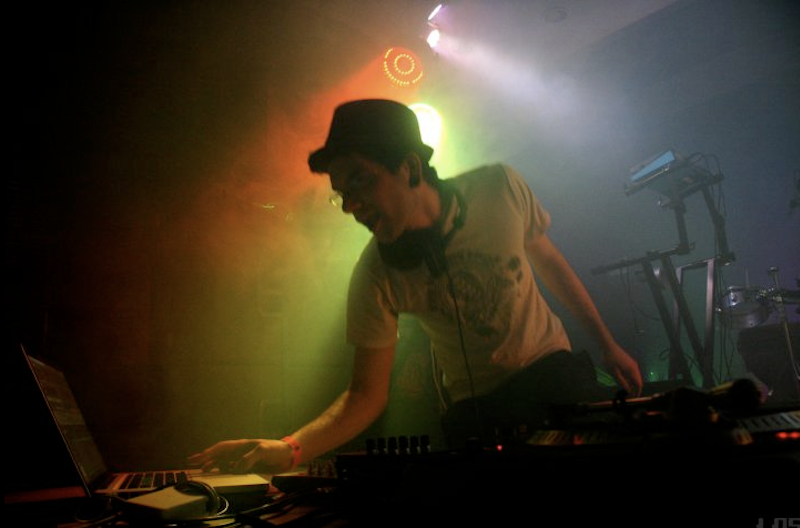 Seek Selekta, ne Aaron Gold, is a hard man to pin down. His tattoos, 7/8” gauge earrings and almost exclusively black clothing make him look like a punk, but he talks like a hippie, spends half his time on a farm and has drum chops for days, though his recent focus has been Djing and production.  Born in Los Angeles, raised in Prague, educated in Michigan and residing in Oakland, he’s well-cultured, with a healthy case of wanderlust. All of these anomalies make for some compelling, wholly original music that defies categorization.

Splice Today: Can you tell me about the process for making a track with someone halfway across the country?

Well, I produced the beat in a tool shed in the woods on the farm where I work. As I was making the track I kept thinking of a forest spirit flying through the trees firing off voodoo love arrows at people. That’s where the name comes from, and that’s what I told L05 when we met in Ann Arbor to finish the production and create the lyric concept. Even though it’s a hard beat, we both wanted to make the track romantic, convey that hard-hitting love. Then I went back to Oakland, and he wrote some really beautiful lyrics inspired by his girlfriend, sent a vocal mix to me, and I loved it instantly.

ST: Did anything L05 bring to the track surprise you?

I wasn’t surprised, because I’ve known him for years and his talent is incredible, but I was still absolutely blown away. The sincerity of the lyrics, the way the flow rides over the percussion, the sexy as hell hook. I could not be happier or more impressed with his contribution.

Danny [aka Anythin4Selena] brought the Mexican flavor, which is an integral part of Californian culture. When I moved to Oakland I was exposed to cumbia through Danny and his duo, Pony Loco. Danny came to my house one day, pulled up a youtube video of two guys singing a traditional Mexican song and playing acoustic guitar and harp, and it was all over from there.

ST: Is this a musical direction you’ll continue to explore in the future?

Definitely. My beats all have a lot of percussion because I love playing percussion, but before I moved to Oakland I focused on Middle Eastern and West African sounds. Now being in California and hearing what’s poppin’ in Oakland, I’m leaning towards Latin American sounds: congas, bongos, timbales, and shekere. Lately I've been into speeding up cumbia beats to 140bpm but putting the backbeat in half time at 70bpm.

ST: What other artists would you like to collaborate with?

About a month ago I put out a track with my brother Nate aka Twst-1, and we have plans to continue to work on music together. I’m so proud of him, he’s killing it in LA right now. I’m excited to be in the East Bay, I’ve been meeting so many amazing people and have beats out to some locals right now. I’m always looking for new singers / MCs that bring sincerity, positivity and empowerment. I’m all about nasty bass with uplifting lyrics.