I listen to the Beatles all day, I don't give a shit

Evidence's I Don't Need Love is just the latest Beatles mash up album. 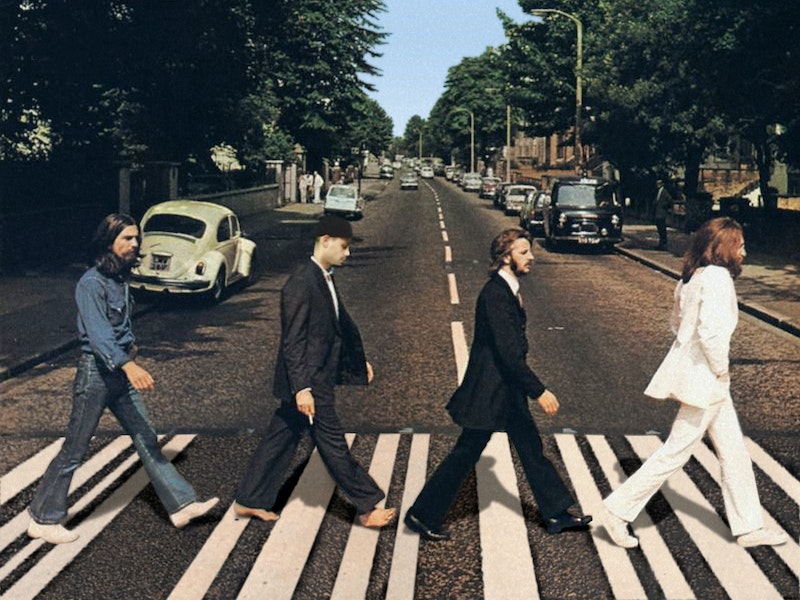 There’s no ignoring the Beatles. Ever since last year’s long-awaited release of the group’s remastered CDs, it feels like the Fabs have been ever-more-present: We’ve had the Beatles version of Rock Band, the much-delayed arrival of the catalog on iTunes, the John Lennon birth and death anniversaries, and Paul McCartney receiving the Gershwin Award at the White House and continuing his sporadic tour, culminating in his salute to Lennon on this past weekend’s Saturday Night Live.

But while a great deal of this can be filed in the nostalgia bin, the Beatles’ music is also being kept alive in a seemingly unexpected quarter: The mash-up. The trend began, of course, with 2004’s The Grey Album, Danger Mouse’s masterful mashing of Jay-Z’s Black Album with the Fabs’ White Album. Since then there’s been a cottage industry in mashing the Beatles, with the results almost all found on the web (the Beatles and Apple Records are notably humorless when it comes to the unlicensed uses of their output).

One of the first was the Beatles’ own Love (2006), which with a few exceptions came off as a mostly tentative dip into the mash-up waters, notable mostly for the surprising depth on display of the remastered snippets and teasing Beatle fans with what was then still three years away. Much more enjoyable has been an ongoing series of mash-ups by an outfit called CCC, which has produced song-by-song mash-up albums like Cracked Pepper and Revolved, combining the likes of “Getting Better” with the Clash’s “London Calling” and “Eleanor Rigby” with Madonna’s “Ray of Light” to stunning effect, in a manner by turns affectionate, hilarious, and (in a nod to the patois of the time) groove-y.

Since then DJs and remixers have tried pairing the Fabs with everyone from the unexpected—Guns N’Roses (“Sgt. Pepper’s Paradise City”) and the Ramones (“I Wanna Be Your Sedated Man”)—to the boringly obvious likes of Oasis (“Don’t Let It Be Anger”) and the Monkees (“Paperback Believer”).

The availability of stems from Rock Band—clean, separated tracks of dozens of songs’ individual vocal, guitar, bass, etc. lines—has helped mash-ups explode across an infinitely expanding universe (including the multi-album efforts of an outfit with the straightforward moniker The Beatles Remixers Group), with hip-hop again coming to the fore. Last January came Wu-Tang vs. The Beatles: Enter the Magical Mystery Chambers, the brainchild of Tom Caruana, a Brighton-based music teacher and producer; it largely worked better on paper than in the headphones, though it inventively included samples of other artists’ Beatles covers alongside snippets of the Fabs themselves.

Late last week came the newest entry, from Dilated Peoples rapper Evidence. The 10-song I Don’t Need Love is a fairly immersive Beatles experience, employing interview snippets and those ever-present Beatlemania screams to underscore the laconic, sometimes unsettling musical strategy of eschewing obvious hooks like the “Taxman” bassline in favor of more subtle touches, like adding the pre-climactic orchestral throb from “A Day in the Life” to the nightmarish lyrical menace of “Lines of Cocaine” or Lennon’s and George Martin’s remarks on the pressures of fame behind the “Eleanor Rigby” syncopations of “Let the Beat Flip.”

Speeded-up, jagged bits of “Come Together” keep the stop/start rhythms of “Frame of Mind” off-kilter, and the barely-audible “ho-ho-ho’s” from “I Am the Walrus” help keep the weed-friendly paean “Egg Men” suitably off-balance. A mellotron-led rap over “Hey Jude” on the concluding hidden track wraps things up in a nicely woozy, defiant fashion.

As usual, I Don’t Need Love’s origins are somewhat mysterious. Evidence himself claims that it’s been leaked without his knowledge; given the project’s inclusion of DP member Rakaa, it’s uncertain as to whether the tracks were originally meant to be a part of a new DP album, Ev’s Cats & Dogs project, or the standalone work that it now is.

Why some hip-hoppers are jumping into the Beatles mash-up playground of late is likewise curious. With Jay-Z, Kanye and others striving to employ ever-more-obscure samples (the odd King Crimson quote notwithstanding) in their compositions, perhaps those who are less than household names are grabbing for something that’s more instantly recognizable?