How Author & Punisher is metal, and how it isn't. 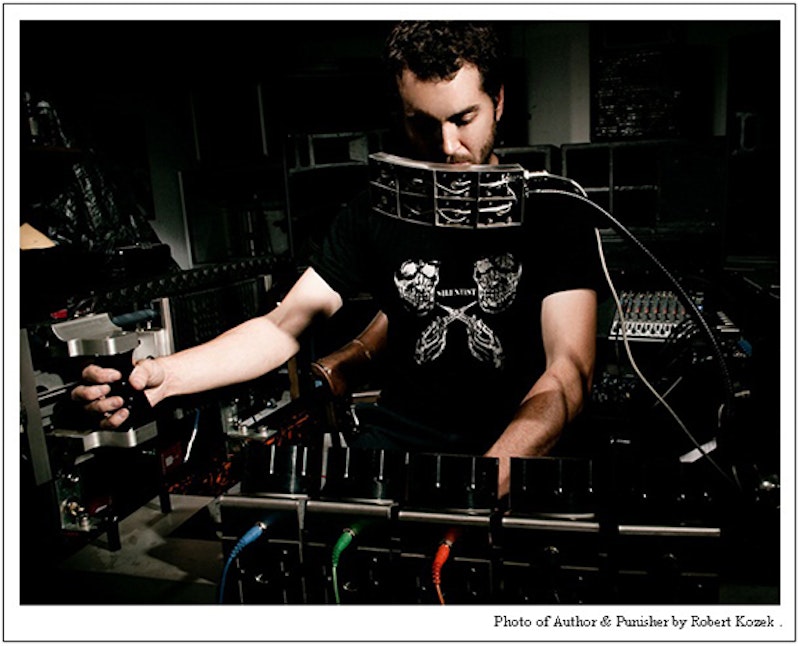 Author & Punisher is an unusual name for a metal band. In the first place, I'm not sure how I feel about cutesy puns in my metal. And furthermore… well, sure "Punisher" sounds decidedly metal-worthy (if a little too Marvel comics for my taste.) But what is this "Author" nonsense? Metal bands are supposed to be debased monstrosities singing about debasement and monstrousness—Autopsy, Aborted, Abscess, or even Atheist. "Author" though—what the hell is that? You want your face on a dust jacket? You want Terry Gross to ask you what childhood trauma caused you to be a sensitive new-age metalhead? And for Lucifer's sake, it’s umlauts. Umlauts! Not ampersands! What sort of metal band are you anyway?

A sort of half-hearted metal band—or maybe, less derogatorily, a half-souled one. Author & Punisher is just one guy, Tristan Shone, and he's as much an electronic musician as a metalhead. Pillaging ground already much-ravaged by industrial metal bands like Jesu, his new album Ursus Americanus finds the plentiful common ground between doom metal's slooooowwww heaaavvvyyyy atmospheric trudge and electronica's spaced out ambience. "Mercy Dub," for example, has (in the best traditions of both ambient and doom) almost no rhythm; it's just a series of irritating, quasi-metallic bleeps and low-end fuzz-edged burps, along with some assorted drones. "Below and Above You" is a repetitive goth march, with actual singing rather than screaming. "Flesh Ants" is more recognizably metal; processed vocal roars materialize like mottled troll heads out of the surrounding static and the industrial here-I-am-in-the-glorious-imperial-canning-factory-beats hammer around each other with satisfying evilness.

Still, even at its most visceral, Author & Punisher sounds more like Brian Eno inspired by Black Sabbath than like Black Sabbath inspired by Brian Eno… which is, no doubt, why the name is Author & Punisher rather than Punisher & Author. Metal is famous for being tight and programmed, in opposition to the sloppiness of punk—but still, Ursus Americanus attains a whole different level of artificial premeditation. The looping chants and irritating rising tones on the 10-minute doom drag out "Set Flames" for example, seem notably stiff and clinical even in comparison to a quite arty doom band like Khanate. Each shriek, every ear-shredding blast, snaps in and snaps out like it’s been carefully measured, quantified, and programmed—which, of course, it has. Typical doom bands—like Khanate and Black Sabbath —seem to be caught in the inexorable dankness of their own riffs.  Thus the appellation, "doom"—it's about the detuned thudding, grinding approach of a blindly crushing fate. Doom bands are buried in an avalanche that they started but can't control; Author & Punisher is starting the avalanche and then watching itself be buried. It's maybe a subtle distinction… but this is a genre where even subtle is elephantine.

Metal, with its horror fantasies, death worship and just sheer loudness, is often seen as characteristically sadistic. But Author & Punisher gives the lie to that, I think. Most metal is about abject disintegration; a bone-white control that is so desperate as to be indistinguishable from losing control, a violence that is less triumphal than consuming. In short, it's masochistic. Author & Punisher, though has that doubled, cold distance in its ampersand. It's not just the blind force that erases the self; it's the self-wielding the blind force. Ursus Americanus carefully observes its own debasement, like de Sade enumerating the lashes of the whip. The power is not just in the brutality, but also in watching the brutality and claiming it; not merely in being the punisher, but in being the author of the punishment.

This leaves me wondering if extreme metal might not be looking in the wrong direction for its extremity. Kraftwerk's cold, deliberate anatomization of dance music or Britney's self-commodification as affectless pop diva—isn't there something there more disturbing than Slayer's un-distanced embrace of Holocaust imagery? Metal celebrates the body as corpse, but the whole point of that inhabiting is the entirety of the debased erasure. There's a whole other level of perversion to measuring the corpse and cataloging the corpse and sniffing it at 15-minute intervals to record the exact instant of decomposition for posterity.