Stand In the Place Where You Aren't 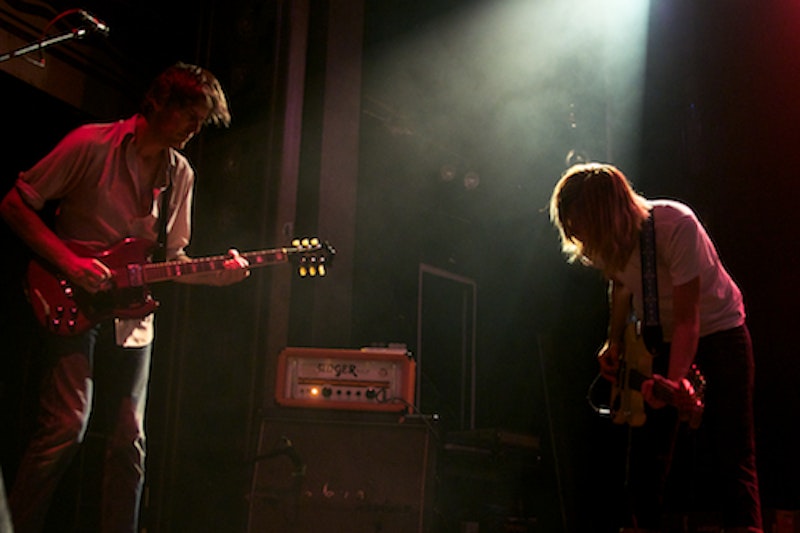 Leisure signifiers dot the Jicks’ iconography: college sports facts, Scrabble, crossword puzzles, a self-effacing sense of mirth. In the wake of 2001’s Stephen Malkmus and 2003’s Pig Lib, the “whimsical indie rock” tag was bandied about and, in some quarters, stuck: it wasn’t an epithet, it wasn’t a compliment. Even for those who swear (softly) by every hackneyed joke couplet and round-robin guitar solo, there’s something simultaneously (and curiously) disposable, diffident, and crucial about the albums this band produces and the image it projects.

The live experience is, for better or worse, a revealing one. Bassist Joanna Bohme, guitarist/keyboardist Mike Clark, and drummer Jake Morris are clustered at stage left; marquee-name Stephen Malkmus owns stage right, forcibly fondling a procession of guitars supplied by a roadie. Donning a tight gold lame top and leaping from amp stacks, Clark has established himself as the Jicks’ Flea; Morris seems to approach every song like a Foo Fighters tryout. Bohme practices the slightly awkward, slumped-shoulder shuffle favored by female bassists for millennia. Beneath a laughably overgrown mop of hair, Malkmus hams it up, getting off one magnificent guitar-hero solo hip shot after another, indulging now and again in spastic dance fits, fiddling occasionally with an array of pedals and knobs at his feet. Some degree of by-glance/psychic communication was at play, a conduit running from Malkmus through Bohme to Morris and Clark, and perhaps back the other way. The crushing tension that haunted so many Pavement gigs is, blessedly, absent—even as Malkmus’ vocals (barked afterthoughts) and Clark’s organ/keyboard splashes (blame the sound guy) take a backseat to the kind of dynamic cohesion and melodic sweetness that lends itself better to instrumentals.

So the Jicks live vibe’s all very chill, very convivial, low-stakes: the end of a song is an excuse for the kind of inner-band banter (Clark putting his premature baldness on the docket, Malkmus clumsily running with it, general collegiate basketball geekery) endemic to fortysomething contemporaries who know each other way too well, friends for whom live performance is roughly equivalent to band practice.

The audience—sartorial-misfire miscellany, too-skinny arms everywhere, smart phones and Marlboros abounding and ablaze—may as well not have even been there, idling at ground level and lining several balconies, singing along, drinking from cans and bottles, sparking joints, duly noting the preponderance of selections from last year’s Mirror Traffic. When the oldies did emerge—“Baby C’mon,” “Church On White,” “Jenny & The ESS Dog”—it was then, and only then, that the show seemed to really breathe, momentarily freed from a structural orthodoxy that places a premium on verse/chorus/verse gallops intercut with focused, lopsided jams, an orthodoxy (falsely) suggesting to the uninitiated that the Jicks’ repertoire consists of a single awesome trick. Despite firing on all cylinders—and thrilling this writer, who’s waited 11 long years to finally catch them onstage, beyond measure—the Jicks’ live show plays like a gross self-misrepresentation of what their zig-zagging catalogue makes them out to be: brainy LP nerds with fingers in pop, rock, psych, prog, folk, and even electro, graying punks who are in essence more of their audience than above it, more throttling passion than amused, pro forma/workmanlike whimsy. It’s all a joke, sure, whatever, but one that I felt somehow shut out of. I hope, sometime soon, I’ll get to see those Jicks, the ones who aren’t pretending they aren’t phoning anything in.