Rub-a-Dub-Dub, Three Bros In A Tub 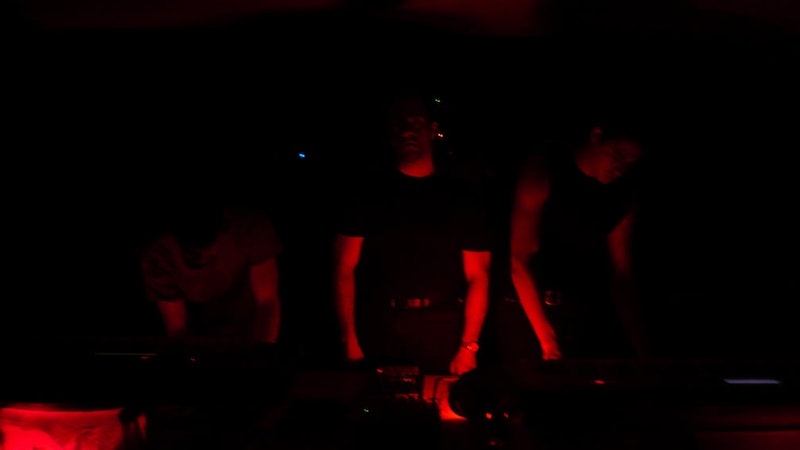 By the time waterboarding entered the cultural lexicon, circa 2007—when it was revealed that the CIA was using the interrogative, simulated-drowning technique to extract intelligence from enemy combatants—Yellow Tears’ liquid-centric reign of terror was well underway. (Song and album titles pretty much give the game away before the laser hits the aluminum.) The Brooklyn trio of Ryan Woodhall, Jeremy Nissan, and Frank Ludovico have developed a lurid sound vocabulary that’s less strictly musical that snuff-film abrasive: a calculated patchwork sluice of literal and figurative slurps, startling irrigative shifts, and provocative, strategically-situated samples interspersed with halting, spider-webbed rivulets of electronic noise.

Uncomfortable stuff, so singling out the group’s latest release as its least palatable on a Human Rights Watch level is saying something. And yet here I am, saying that, because The Cult Of Yellow Tears (Hospital)—an EP issued a few days prior to Christmas Eve 2010, pretty much under everybody’s radar—celebrates waterboarding openly and eagerly, simultaneously reimagining the practice as frat prank, bro-down bonding technique, and shock tactic.

If a Yellow Tears handbook existed, its first precept would be something like “Leave the listener nothing to hang on to.” Without a bass line or trail of scrapes or some other consistent sonic element to follow, immersion in underground music is a lot like being led through a massive warehouse in darkness by someone you just met outside; the willingness to take a chance requires a great deal of trust. Yellow Tears are happy to abuse that trust, stranding nerve-damage sonics in a reservoir of silence that the group plays like a gang of prodigies laying into a concert piano. Opener “The Golden Family I, Incantations II, Consumation III, Wading to Within” sets the tone. Static that suggests bubbly lather precedes jumbled murmuring; horror-movie string-section swells threateningly, approaching a crescendo—which is then cut short by dudes coughing up water. Then, reminiscent of predecessor The Pissmop LP, an eerie soup of aquatic sub-ambient noises rides a rushing, gurgling tide of liquid, seemingly flushed down into a drain.

That waterboarding motif surfaces again and again throughout Cult, swirled in less physiological signifiers—Wolf Eyes hem and haw, the roar of a subway-station field recording, a snatch of the Jaws theme, fusillade-like mortar launches of static, torrential downpours on tin, or maybe a facsimile of firecrackers—and that bold accusatory silence, mocking even as it damns. In a biblical sense, though, remember, we’re considering water; immersion in water suggests baptism, and just as there’s no reason to believe these guys didn’t suffer for their art in the process of making it—my lungs ache in vicarious solidarity every time I’m drawn to re-experience Cult again, which is more often than I’m comfortable admitting—there’s no reason to believe that its listener doesn’t come away stronger, different, somehow more alert, aware, less afraid of whatever waking terrors await beyond this singular recording’s traumatized diorama.