Guy Clark's Album of a Lifetime

My Favorite Picture of You is perfection. 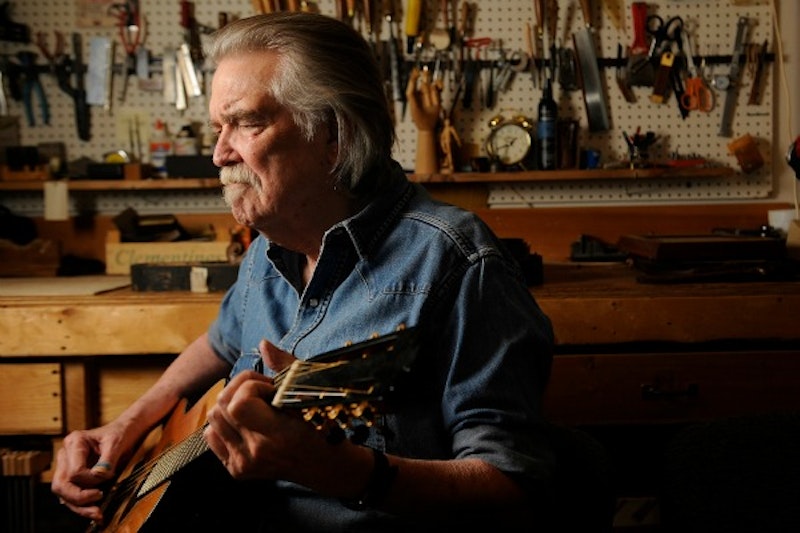 I've never been much of a Guy Clark fan. Songs like “Desperados Waiting for a Train” seemed bloated, sentimental and shapeless, not helped at all by his nasal, clumsy vocals. Johnny Cash could find the goofy thumb-fingered joy in “Let Him Roll” and Emmylou Harris never sang a duet without poetry, but these successes seemed more a sign that Clark wasn't bad enough to get in the way of other people's talents than an actual endorsement of his songwriting. I've never been able to listen to his Essential collection all the way through.

So it was a shock to discover that his most recent album, this year's My Favorite Picture of You, is fabulous. Typically, performers get worse as they age, not better. But somehow, at 72, Clark has sneakily and unexpectedly figured out what he was meant to be doing all along.

Part of it is the backing; the 70s country glop that disfigured some of his work (like that easy listening piano on "Desperados") is gone, replaced by pared-down arrangements and settings. The ¾ guitar on the opening "Cornmeal Waltz," joined by fiddles, is endearing—"Slippin' and slidin', effortlessly glidin' in the arms of my sweet Lillie Mae," as the lyric says.

Clark's songwriting has changed too. The forced cleverness that marred his earlier efforts is mostly gone, replaced by wry humor on "I'll Show Me," ("blame a woman for the way I am/much too easy, no thank you ma'am") and plain, careful description on "My Favorite Picture of You." That last is a perfect love song to his wife, the songwriter Susanna Clark, who died in 2012. The tune rolls easily ahead with years of intimacy and memory: "My favorite picture of you/Is the one where you're staring/straight into the lens." He loves that she's her own person, looking at him and pissed off at him—for getting blind drunk with Townes Van Zandt, according to Clark in interviews. "It's bent and its faded/and its pinned to my wall," he says, and just that quick you see the past is stuck to the present, the picture still a part of his life, because the love is too. She didn't leave then, but all these years later, she's finally left. "The camera loves you, and so do I./Click," he says, and the one syllable, spoken dry and clipped, is a goodbye, like the song.

Just as the lyrics have gotten pared down, so has Clark's voice. As noted above, his singing has always been an irritant; brittle, his phrasing artless in the worst sense. But the years have roughened his tone, giving him character while settling him into his not-especially-wide range. The quaver makes his limitations seem like vulnerability rather than incompetence, and he's gained authority as he's lost volume. On "Hell Bent on a Heartache," my favorite song on the album, he manages the drifting grace of Van Zandt's live work, his voice wandering in and out of the beat, his breaths audible and labored, but right, turning lyrics which could be a kind of rave-em-up seize the day manifesto ("love's a gamble/love's a curse/love's a bitch/but it could be worse") into a paean to helplessness. "Every time I turn around, I make the same mistake," and you can feel that that turning around is an effort, sweet and painful, heavy with all those other turnings.

After listening to this, I went back and tried Clark's earlier albums again. His previous effort, Somedays the Song Writes You is solid, and there are moments on earlier records as well, but nothing comes together with the quiet assurance of this one. It's my favorite album of his, worth waiting a few decades for.