On Kellie Pickler's latest album, The Woman I Am. 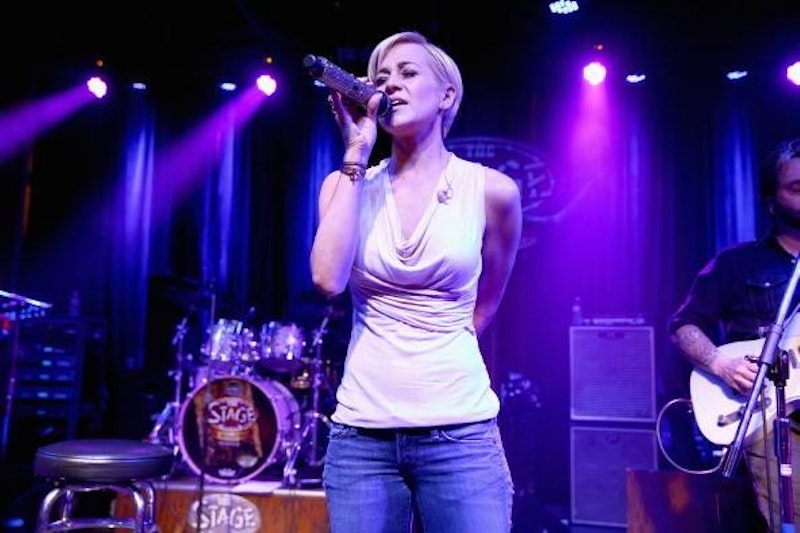 Sometimes artists need to affirm their qualifications, to prove that they are here for a reason and worthy of attention. But authenticity is a losing game. There will always be listeners who think a singer is not authentic enough—or alternatively, too authentic. So why waste time? Show is better than tell.

The country singer Kellie Pickler falls victim to this trap on her latest release, The Woman I Am. It’s possible that she feels an extra need to prove herself as “country” since she flirted with the mainstream, winning the 16th season of Dancing With The Stars roughly six months before the release of her new album. Country is preoccupied with authenticity (as is hip-hop, though they aim for very different audiences). So Blake Shelton, one of country’s most prominent faces, made sure to include a song like “Boys ‘Round Here” on his latest album, proving that working as a judge on The Voice hasn’t changed him.

Pickler’s previous album (her third), 100 Proof, represented her artistic breakout. It opened with two songs that positioned Pickler as a tough cookie with a lot to contribute to country music. In the first, “Where’s My Tammy,” she invoked Tammy Wynette; in the second, Pickler promised to “Unlock That Honky Tonk.” With stomping, snarling electric guitars behind her, she sang, “Don’t tell me country’s gone,” as if she would kill the genre and bring it back to life to prove her strength.

Again and again on 100 Proof, Pickler flexed those muscles, warning lovers not to cross her. In “Stop Cheatin’ On Me,” she warns that she’ll “start cheating” right back, and there are other similarly fiery shots: “I can make my own deal with the devil/then you’ll find out that hell sure can be cold,” or “we can still be friends/as long as I never see you again.” She gave as good as she got.

The Woman I Am finds Pickler working hard to reestablish her credentials and wipe away any memories of her foxtrot and Argentine tango. The title track covers a stream of country tropes: she cries while listening to Patsy Cline, drinks her coffee black and Jack Daniels with three ice cubes. The song comes off like a resume recited over music. “Selma Drye,” about Grandma, works the same angle, this time on behalf of her venerated elder. “Bonnie And Clyde” makes a different kind of mistake, unwisely taking on a subject that’s been done by everyone—from country singers like Merle Haggard and Glen Campbell to French sex-chameleon Serge Gainsbourg to Mr. Beyonce Knowles.

Pickler drew strength from revenge in the past, but here she’s excited by new romance, and when she’s excited, she forgets her need to flaunt the CV. “Buzzin,’” for example, a song about looking for a partner-in-buzz, shows a remarkable vocal turn, as Pickler makes a beautiful jump into a high, clean refrain, “hey there, how about you,” searching and flirtatious. In “Closer To Nowhere,” Pickler builds a powerful love song with the help of an insistent guitar motif, moving towards a huge hook. It’s one of those songs that gets labeled as “country” because it’s by a country singer, but it could fit into pop, rock or indie—any genre that likes a guitar and a uplifting chorus.

“Where Did Your Love Go” finds the singer finessing her way swiftly through nifty patches of rhyme. “I know what happened to my money honey/gone with the weekend, did a little drinking, had a pity party/… and I know what happened to the promise you made/as Monday came with the slow cold rain and you never did call me.” She strings together like-sounding syllables quickly as one might in a children’s rhyme, contrasting her light delivery with gravity of subject. Love is the great equalizer, experienced with equal difficulty by country singers, rappers, and pop stars. The number of ice cubes in Pickler’s whiskey no longer matters. Heartbreak doesn’t give a hoot about authenticity, and she shouldn’t either.