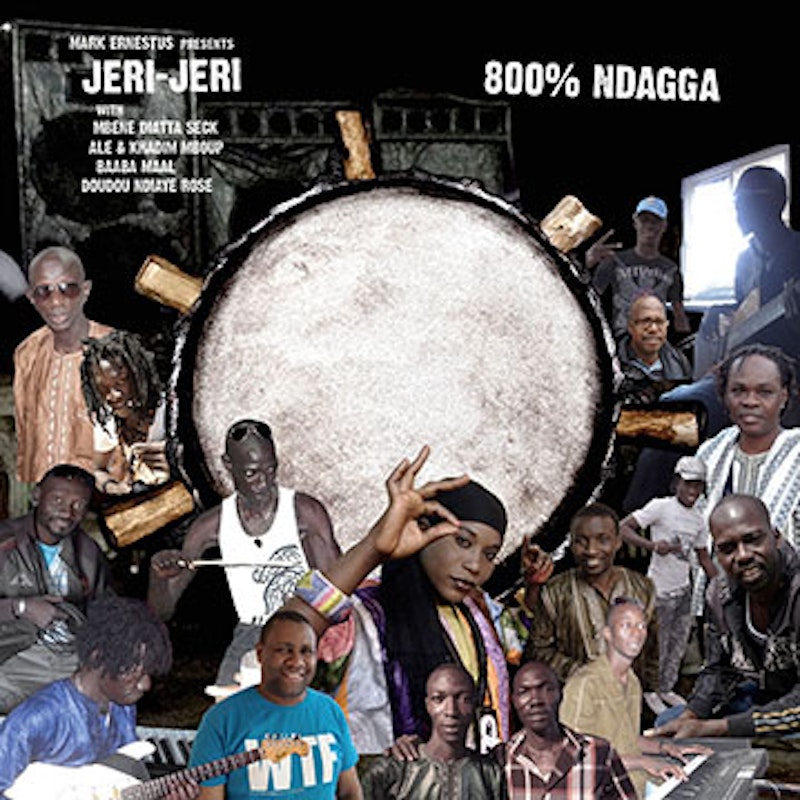 The album is a collaboration between Sabar drumming group Jeri Jeri and minimalist techno producer Mark Ernestus. That makes it sound like the album's going to be some sort of fusion between electronica and drumming, African sounds filtered through a laptop. Instead, Ernestus' role is almost entirely one of production rather than performance. The Sabar drumming, performed with one stick and one hand, abetted by guitar and keyboard, is not filtered through electronica's bleeps and bloops, which drives home just how much the album and those absent bloops have in common. The track "Ndeye Gueye," for example, with legendary 80-year-old drummer Doudou Ndiaye Rose, starts off with a series of percussive but unidentifiable sounds; video game spurts and underwater glugs, repeating around each other endlessly, like an arcade game stuck on loop as teams of frustrated gamers beat on it from all sides. "Daguagne," for its part, is about as close as Jeri-Jeri comes to a groove, the tempo slowed down to head-nodding pace, the drums a stochastic counterpoint, hailstones falling on your transcendental meditation. The nine-minute-plus Mbeuguel Dafa Nekh, with singer Mbene Diatta Seck is both frantic and static, fierce bursts of trance drones with Seck's chanting vocals rising out and then being subsumed and pummeled by blocks of rhythm. You could see it as visceral and primal, or programmed and frozen; the line between the two crumples under the constant assault.

It's not surprising that Ernestus and Jeri-Jeri work so well together; electronica has a long history of influence and cross-influence with polyrhythmic African-American and African music of various sorts, from Africa Baambaata on up through the bizarre repetitions of juke. Not surprisingly, Jeri-Jeri tracks like "Xale" could be juke if you had iterated cursing running over it. The start of the song especially, where the music almost seems to be missing its feet as the drums stutter in, and singer Seck clears her throat, has the stunned, broken-legged gait of the Chicago style. "Casamance" too, is all burping, relentless ping-ponging rush, with singers Ale and Khadim Mboup adding oddly incongruous harmonies that seem every minute in danger of being bucked off the track. Fierce cutting edge US dance music and cutting-edge Senegalese dance have much in common, almost as if they come out of the same future, or the same past.

The awesome video Jeri Jeri created with famous Senegalese singer Baaba Maal on the song "Gawlo" underlines the feeling that the album is time-traveling by standing in place. Maal sits in one place wearing traditional robes while several dancers thrash and spasm as if they're being bitten by robot-mosquitoes, the camera panning back and forth between dignified restraint and joyously awkward thrashing.

Ernestus did an album of remixes (called Versions), but there his touch is light. His alteration of "Gawlo," for example, doesn't change the tune so much as make it sound more like itself; the repetition more repetitive, the staggering beat more staggering, or maybe staggering slightly differently. It's hard to know precisely since after listening to enough of Jeri-Jeri, the inside of your head starts to feel like it's jerking around by itself. In the future, our brains will be removed and subjected to simultaneous analog and electronic pummeling. Or maybe that's in the past. Or right now. Whenever and whichever, Jeri-Jeri is some of the wrongest sounding right music of the year that was.