The Georgia Satellites and The Righteous Hillbillies, live in Joliet, IL. 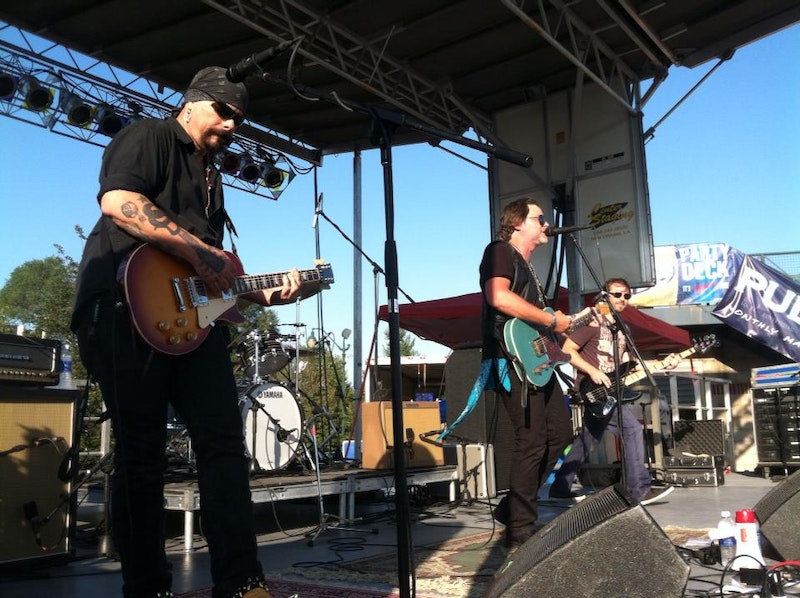 Bob Seger once said that “rock ‘n’ roll is too infectious to ever die.” On Saturday, August 16, in Joliet, Illinois, the words of Seger appeared to dance to life on a minor league baseball field.

Joliet is a struggling steel town in northern Illinois. The home of the Blues Brothers, and the Prison City of Statehouse Penitentiary, Joliet has seen better days. Most of the manufacturing work is gone, and the downtown area surrounding the courthouse has more empty storefronts than open businesses. The institutional presence of the legal system—jails, detention centers, the courthouse itself—casts a ghostly shadow over the city, at once keeping it alive, and killing it.

Rock ‘n’ roll, like American steel, is another struggling industry. Behind all of the recognizable big names, there are countless bands and artists—many with talent and heart—who are finding it nearly impossible to gain the visibility and money necessary for earning a living on their passion and craft.

Silver Cross Field in Joliet made an attempt to fight back the juggernaut of communal decline and rock ‘n’ roll stasis on August 16, hosting a Southern Rock show with The Georgia Satellites and The Righteous Hillbillies.

The Righteous Hillbillies—a Joliet-based band that has also opened for Bad Company, Charlie Daniels, and many other notable headliners—have built a following around Chicago, and beyond, by adhering to the vocation and searching out the substance of their style. It is the musical miscegenation of black blues of the delta, the white man’s blues of early and outlaw country, and the rock ‘n’ roll of Sun Studio, Lynyrd Sykynrd, and The Allman Brothers.

The Georgia Satellites are practitioners of the same form of rock ‘n’ roll—loud, rowdy, and ribald—fit for bars and beer gardens. Kev Wright, lead guitarist for The Righteous Hillbillies, spoke with childlike excitement from the stage about looking to his right and seeing Rich Richards' Les Paul propped up, ready for its owner to strap it on and fill the air with the boogie riffs of “Keep Your Hands to Yourself,” “Myth of Love,” and “Battleship Chains.”

The Righteous Hillbillies, powered by Wright’s swampy and smoky guitar lead, Brent James’ soaring, gospel-infused vocal, Jeff Bella’s steady bass, and Barrett Harvey’s thunderous drums, had the small audience moving. Their original songs—“Black Jack Momma,” “Come On Now,” and “Sweet Dove”—wore the Satellites style uniform, but had enough originality to separate them from their headliners. During “Sweet Dove,” Brent James had the crowd cheering wildly when he sang a Doors medley during the song's break.

There are few young bands pumping life into the old religion of rock ‘n’ roll. Blackberry Smoke is now gaining prominence, and The Righteous Hillbillies are set to record their newest album at the iconic Fame Studios in Muscle Shoals, Alabama with B.B. King’s former producer. The independent band has launched a Kickstarter campaign to help fund the trip and production costs. Anyone who loves, lives for, or cares about great rock ‘n’ roll should make a donation, and excitedly await one of the rewards that they promise.

This is a band that deserves a moment in the national spotlight, and given the right opportunity, could advance and enhance the American promise of rock ‘n’ roll. They proved that on August 16th when their set flowed effortlessly and seamlessly into the loud, sonic poetry of The Georgia Satellites. Led by original band member, lead vocalist, and lead guitarist, Rick Richards, The Satellites blazed through a set of original songs, Springsteen’s “Born in the USA,” and The Beatles’ “I Am the Walrus.”

One of the highlights of the show was a seemingly improvised medley of Warren Zevon’s “Carmelita” and the Rolling Stones’ “No Expectations.” Richards’ vocal sounded elegiac, and his work on the slide guitar outdid even the plaintiveness and intensity of those songs' lyrics.

The rest of the night, however, was about fun. Without apology, the Georgia Satellites, like the Hillbillies before them, played music to encourage dancing, drinking, and all around, reckless behavior. The event did not sell as well as organizers had hoped, but Brent James summed it up best when he told the crowd, “You’re small, but mighty.”

As the people danced, and the rock ‘n’ roll played on, one could begin to feel the hope of the music’s infectiousness coming back, one could see some light for America’s falling communities creeping through a crack in the wall, and one could see the fragments of faith that good things could last.

—David Masciotra is a columnist with the Indianapolis Star, and the author of Mellencamp: American Troubadour (forthcoming, University Press of Kentucky).