From the crates: The Grease Band

Straight from the dollar bin to your hard drive. 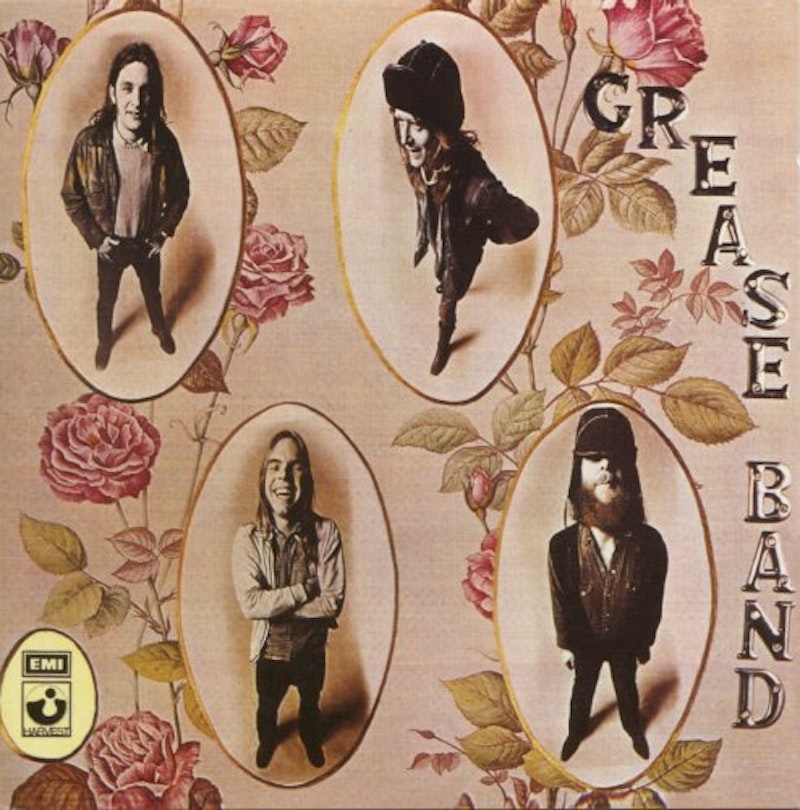 I’ve derived a lot of joy from dollar bin vinyl, and even more value. In fact, the dollar bin at the record store is one of the main arguments for the format’s superiority, (I could stop beating this drum, CD’s already seem doomed) because where else can you (legally!) find so much music for so little. Of course, most LP’s that end up in the bin are there for a reason, but every once in awhile you stumble upon a record that just looks good, and for a buck, it’s always worth the chance.

It was the faded flowers on the cover of The Grease Bands self-titled debut that first caused me to pause, and the oily streak across the back that caused me to pull it from the racks and throw it in my pile. I probably noticed it was on Shelter Records (in the US, EMI in the UK), drew a mental line to label-mate Leon Russell, assured that at the least I’d be getting some modest, earthy rock. I may have noticed Henry McCullough’s name credited as lead guitarist, and as a young Beatle freak, I would have immediately known him best as one of the several lead guitarists in Paul McCartney’s Wings. I definitely got a twinge of “where have I heard this name before,” but couldn’t quite place it.

When I got home, threw it on the platter and did the customary allmusic.com search it hit me – The Grease Band, as in Joe Cocker & The Grease Band. If it took ten seconds on the internet to figure that out, it took the equivalency, ten bars of “My Baby Left Me” to tell this is an incredibly tight, crack studio band that knew their way around their axes and the blues/rock axis.

Outside of the aforementioned McCullough, The Grease Band also featured Chis Stainton on keyboards, who went on to tour with Eric Clapton, bassist Alan Spenner, rumored to be the first white musician offered a job at Motown, future Fairport Convention drummer Bruce Rowland and rhythm guitarist Alan Spenner – who has the least impressive resume, going on to play in the white soul outfit Kokomo (who?).

Their collective effort is workmanlike, making up in energy in tone what they may have lacked in songwriting talent. Not unlike Crazy Horse, Neil Young’s backing band of many years, they balance r&b tinged rock with swampy blues and a dash of boozy country. “Mistake No Doubt” is a side one favorite, with spectral backing vocals and “Down Home Mama” anchors the second side, a six minute organ driven ballad in the vein of The Band or Traffic.

What those bands had that the Grease Band didn’t, and the reason this album is just quite good rather than essential, is the lack of a standout front man. As much as Joe Cocker’s histrionics could be distracting, a presence like his is clearly missed when stripped away. Still, The Grease Band make no pretensions. This isn’t a concept album, unless the concept was good time party music that sounds better the louder it gets. It’s not the kind of obscure gem that would’ve been looked over in its time for being too radical – it’s an unadorned document of a bygone era in rock where bands were more than the sum of their parts. In short, the perfect dollar bin discovery.

You can download it here, ripped from my admittedly less than perfect copy