The man behind Ecstatic Sunshine talks about his work, life on Earth, and what inspires him.

Below, "Dunk" from Yesterday's Work. 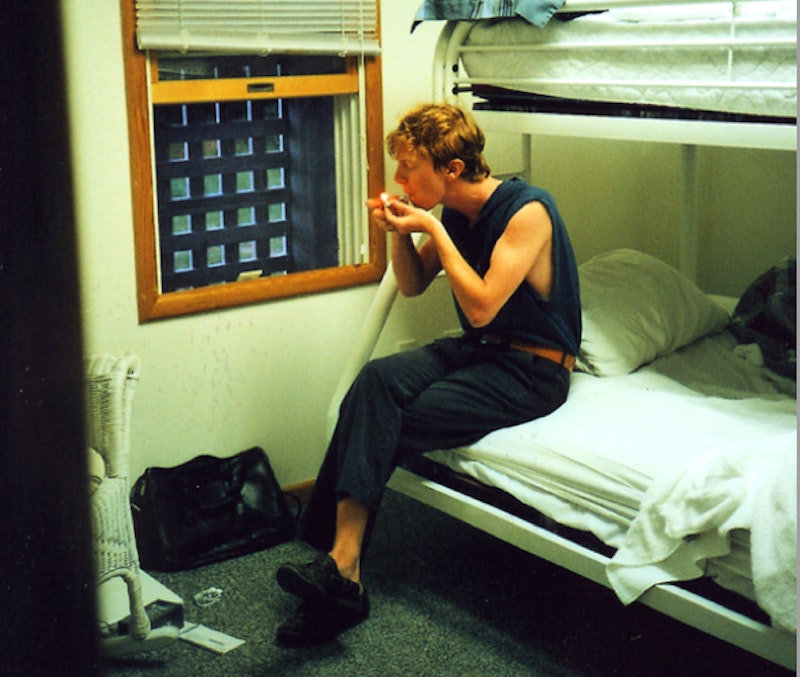 Ecstatic Sunshine has been a staple of the Baltimore music scene since 2005 when Wham City and its hangers-on exploded into consciousness. ES started out as Dustin Wong and Matt Papich, both on guitar, trading riffs and playing impossibly fast to create a kind of swirling, surfy pop with a punk aesthetic. Since then, Ecstatic Sunshine's lineup has fluctuated and morphed several times, with Papich as its only constant. Wong left in 2008 to concentrate on his work with Ponytail, but Papich's momentum has never slowed, and he continues to produce a new ES album every year.

The band released Yesterday's Work in 2009, a record that brings the guitar into unknown territory and stretches it and molds it until it becomes something entirely foreign. It's a sound that is not easily described; sounds pop in and out, orbiting a song's central loop or motif, making appearances and shifting gradually every time. I talked to Papich recently via email about his work.

Splice Today: How has your compositional process evolved from the Freckle Wars years to now, working on the upcoming Dissolver?

Matthew Papich: Well, it's really, really different now, as you can imagine based on the sound. When we were writing the songs for Freckle Wars, our process was pretty straightforward. Often Dustin or I would compose the general song, as a whole—then bring our composition to the next rehearsal. It would change from there but it was really a traditional writing style. From Freckle Wars on, the studio became more and more important—really Way was the first record that was fully dictated by the limits of the studio.

Now I'm using Abelton Live as the main compositional interface, and the process for Freak Flag has really been about collecting and making unique sounds—melodic, percussive, or ambient—and building a composition around those sounds. I try to keep chance involved—not as didactically as Cage would—but I use it among other processes. I keep a deck of Oblique Strategies cards on the table for mixing; they're amazing...

ST: Ecstatic Sunshine's lineup hasn't remained the same for more than one record at a time, and consequently your sound has never quite stayed in one place. Is this constant re-shaping intentional, and does it speak to a larger band philosophy?

MP: It's been very intentional, yes. Even at the beginning, if you listen to the recordings Dustin and I made in the first year or so, when it was just us, the sound is being repurposed constantly. It’s a way to keep the project contemporary, and it lets ES expand into multiple sonic territories. I've never felt easy with the way bands are so often trading the future of sound for success. It’s common to settle on a sound and dedicate a career to reiterating or refining those ideas indefinitely. But that process is of no value to culture as a whole. It’s a process that defies the Present, and really is a practice of nostalgia. Ecstatics has always been an exploration of potential awareness, and as with any inquiry ES is moving further into the work, abandoning some ideas, advancing others.

ST: Yesterday's Work—can you comment about what the title means and why you chose it as the title of your most recent record?

MP: Sure, It’s a kind of playful title. I liked it partly because it refers to the time records take to make and disseminate. "Yesterday" was carefully chosen, it is both vague and explicit, and so it reminds me of life on earth. "Work" was also considered, and it felt right, because the studio practice was very real, very everyday, based on repetition. So, "Yesterday's Work" is a way to say what is most recent, to point to a kind of present reflection.

ST: What are your primary influences?

MP: My primary musical influences are constantly changing - leading up to Yes Work I was listening to a lot of Early Rocksteady, like Alton & Eddy or The Charmers. I was also really hearing Penguin Cafe Orchestra.  More recently I've been checking out a lot of British Electronic Music, mostly the stuff related to Dubstep in one way or another. Mount Kimbie, James Blake, Ramadanman have all been getting a lot of play for me. More generally, Eno's ambient music made a huge impact on me, as well as Charlemange Palestine's "Four Manifestations" and "Strumming Music."

ST: Photographs are very important to the band—you've said you take a lot of pictures on the road and even have a stack of photos to look at while you play. What do these photographs mean to you and how do they affect/aid your performance?

MP: Photographs are important to me because they force a focus of attention—when you click the shutter you choose, maybe because you were interested in the moment, or even disinterested. Either way, what is left is a document not so much of light in space on film, but of a choice to delay time by attending to it.

When I'm playing music live, in front of an audience in a space, one of the goals is to demonstrate possibilities for life on earth. Sound is a good medium for this because it can effect our perception of time and space as well as other less measurable forces, like our memory or basic emotions like optimism or empathy. But I do not want to demonstrate just one possibility or just one view. So I keep the pictures in my flight case, around the sampler and mixer, as many references to other life on earth.

ST: After Dustin Wong left in 2008, you toured with Kieran Gillen and David Zimmerman. This era of the band (Behind/Besides) never released a record. Why is that? Was there one made?

MP: Yeah, that version of Ecstatics was by far the most volatile, which was great actually, it was pushed the hardest but it kept us from really being able to commit to a recorded sound. We did in fact record the three main tracks from that era; “Take It Easy,” “Topless,” and “Cutter Hammer”—but never finished mixing out of a kind of anti-gravitational feel at the time. They're important pieces listening back to them; I hope one day to release it all.

ST: You toured Europe earlier this year with Jason Urick, and are going back in a couple of weeks. Did you notice a difference in how European crowds responded to your music as opposed to USA audiences?

MP: To be honest I haven't really played to a US audience in a long time. I mean, I play to Baltimore audiences a lot but we're not very American per se. But European crowds are a little different, more contemplative maybe, a little more in depth. Its funny you ask this because hanging with Dustin the other night we got on the same subject. He related it by noting how in America someone might find you after the show and ask "Have you been influenced by Math Rock?" and all you can really say is "A little bit." In Europe someone might find you after the show and ask, "Whom have you been influenced by?" And then you can say "Penguin Cafe, BBC Radiophonic music" whatever it is, and have a real conversation. It seems like less of a facts-based culture there, less trivial maybe.

ST: You've been living in Baltimore for several years now. How has the local scene changed in the time you and Ecstatic Sunshine have been around?

MP: You know when ES starting playing we were really part of a party music scene. It was great, but I never really knew where Ecstatics fit within it. It’s constantly changed since then, but now more than ever I feel comfortable in the Baltimore scene. It's expanding you know? More types of sounds are here than ever before, and the sounds are better, less derivative, and more based on living than ever before. The Soft House is a great example of how domesticity and radicalism can meet and produce a kind of New Age being.

ST: How do you see your band fitting into the Baltimore music scene? Does Baltimore still feel like home?

MP: Yeah, now more than before Ecstatics makes sense to me here in Baltimore. I mean, there is a kind of solo guitarist guild forming or something, like it’s a craft or a trade almost. Dustin is making great solo performances, Ken Seeno has a really beautiful record in the works, Chris Day was doing something very unique last time I saw him, John Jones was awesome at that show with Jason Urick, and there's a lot more I'm missing.

MP: Well, I'm very excited to be continuing work on "Pressure Drop," which is collaboration between Nicholas Gottlund and myself. It is a series of projected images that are organized using chance operations and work together with ES music to form a kind of montage. We'll hope to show that work again soon.

Freak Flag, a digital seven-inch, is out via http://www.thelifestyle.info/ecstatic on July 6