Is it even a fair comparison anymore? 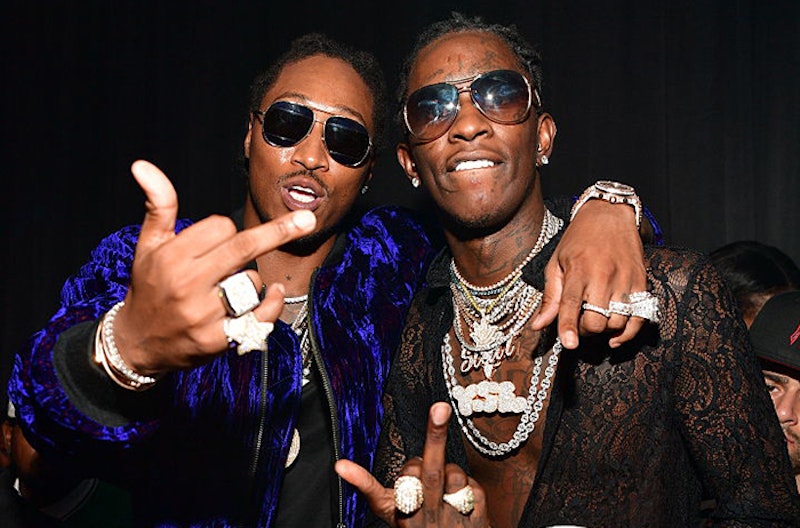 Future and Young Thug—the two auto-tuned ATLiens who’ve shifted hip-hop's sonic landscape more than anyone else this decade—have rightfully dominated rap discourse over the last two years. Their influence has been so pervasive that it's hard to map: Future's hard-nosed prolificacy has inspired his contemporaries to churn out content an army of mid-1990s Tupacs (with both good and bad results); he’s also contributed to the shortening of mixtapes, traditionally impenetrable in length: Beast Mode, 56 Nights, What A Time To Be Alive, and Purple Reign are all 40 minutes or under; and the mere existence of Desiigner, an uncanny simulacrum better described as G.O.O.D. Music's version of Frankenstein's monster than a unique artist.

Thug's reach has been just as wide, and will probably have a more permanent effect on hip-hop. In 20 years, biographers will ask the question: what did he shift more, the aesthetics, the music, or the culture as a whole? He wears a dress on the cover of his most recent mixtape, JEFFERY. His often-indistinct warbles have moved rap into a more free-associative lyrical direction. He even shrugged off the increasingly unpopular concept of gender: "In my world," he stated in a 2016 Calvin Klein advertisement, "You can be a gangsta with a dress or you can be a gangsta with baggy pants. I feel like there’s no such thing as gender."

The two innovators share a charged mutual history, though. After months of tacit competition, Thug analogized Future to Tito Jackson following a perceived slight by Metro Boomin. The two have apparently reconciled since, appearing together on the DJ Esco attributed track "Who" last July. This union may only have been possible, though, because Thug thinks he won: he claims that all nine tracks on JEFFERY were named to honor his idols, but "Future Swag"—a near carbon-copy of Beast Mode cut "Lay Up"—scans more as imitative taunt than homage.

And, as much as I love both of them, Thug’s been able to maintain his momentum throughout 2016, while Future has faltered. In fact, two songs of the same name—“Drippin’”—can trace their trajectories.

Future released his "Drippin'" in January, the fifth track on Purple Reign, his emotional nadir; Thug's "Drippin'" came out in March on the far chirpier Slime Season 3. Both tracks represent stylistic shifts for the rappers: Future's voice scrapes against Metro Boomin's beat—he sings like he's on the bad side of a binge, ready to collapse at any moment; Thug, on the other hand, propels himself to delirium with his phonic acrobatics and soars through an out-of-body jumble of inscrutability. I've wavered over which track is better, and still haven't settled on a definitive answer. Both are Song of the Year contenders.

But while Thug has built on the advancements of "Drippin'"—JEFFERY centerpiece "Harambe" is the track's spiritual successor—Future has stagnated, and disavowed the unfamiliar sonics of his "Drippin'," instead opting to linger with his 2015 sound, producing derivative projects like Evol and Project E.T.

As a result, Thug is looking more and more like hip-hop's Bowie figure, while Future may have to settle for T. Rex status.