The genius of Liz Harris. 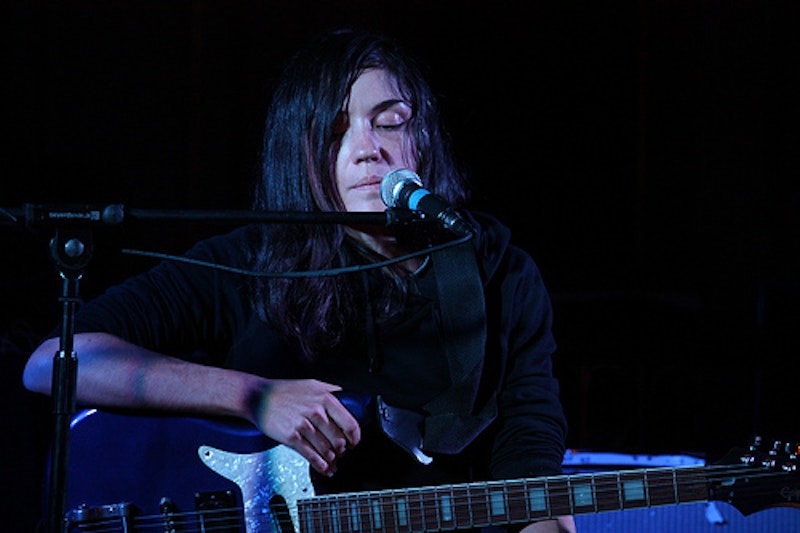 On May 11, 2009, I saw Animal Collective at the 9:30 Club in D.C. This was at the peak of the Merriweather wave, when the laymen with waxy ears started paying attention to a band they might’ve earlier dismissed as too weird or too strange to digest. Meaty wrists and necks wrapped with LiveStrong and tribal tattoos pogoing to an ecstatic “Brother Sport”: this was inevitable, it was what the band wanted, you console yourself, to be as massive and popular as can be; who doesn’t want that? Your demographic spreads out. But their hearts are right, because they still bring out great, unique, and challenging opening acts out on tour with them, like Black Dice, Ariel Pink, Dent May, and Grouper, aka Liz Harris of PDX, Oregon. Harris opened the 9:30 show, and I could barely hear her haunting and amorphous drones over the din of the crowd. Hunched on the floor with her gear, Harris was invisible as well, and her set passed by without much notice. It wasn’t until a few months later when I got her 2008 LP Dragging a Dead Deer Up a Hill that I discovered she was a genius.

Dead Deer doesn’t sound like something made in a bedroom on a four-track, despite its lo-fi lineage. It’s a piece that sounds like it emerged fully formed out of damp underbrush, or a pile of dead leaves. It also is the unmistakable sound of death—Grouper isn’t elegiac, it’s not even funereal; Dead Deer and its recently released companion record of unused material, The Man Who Died in His Boat, sound like the Grim Reaper’s personal playlist, hymns for scything and collecting recently departed souls. If Cat Power’s What Would the Community Think is the tone of deep depression, these records are that spirit disembodied, at peace but still unspeakably disturbed. It’s an enormously powerful atmosphere, and Harris’ sparse, cyclic songwriting only benefits from the grim aura of her recordings.

The Man Who Died in His Boat is a B-sides collection in the best possible way: rather than weak, undeserving material, this compilation is full of strange, elongated melodies and songs that, for whatever reason, didn’t fit onto Dead Deer. Like Sad Sappy Sucker or Pisces Iscariot or Incesticide, the tone is more relaxed, like a mixtape rather than the big, bi-annual statement that a proper LP is. Detours and tangents are welcomed, and songs that might’ve sounded too much like other songs on Dead Deer (there’s one on here that I swear uses practically the same guitar progression as “Heavy Water/I’d Rather Be Sleeping”). The non-linear and informal tone of the record provides a new context for the material too: a song like ”Living Room” might’ve been forgettable next to soundalike “Invisible,” but as a closer here, it’s enormously powerful: a broken, dirtied ear worm of a melody that grabs your attention immediately and ends abruptly, the quick exit of a ghost away from warm bodies. Liz Harris is a brilliant musician because her records and songs sound truly otherworldly, a term so abused it merely connotes facepaint on Jimmy Fallon’s show. Harris achieves the impossible in the Internet age by being mysterious and elusive. Her music exists outside of anything; it’s the sound of death.