On Is and Always Was, Johnston teams up with producer Jason Faulkner, but the results are too Big Studio to be really interesting. (Grade: B-) 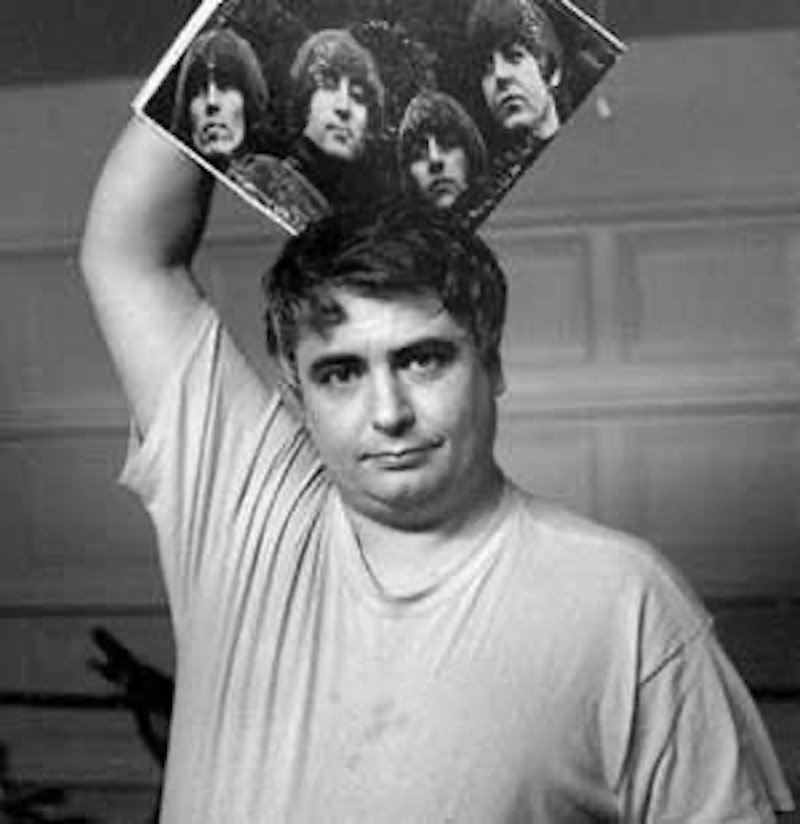 In the annals of music history, few have had a career so quintessentially rock and roll as Daniel Johnston. An oddball poet who made a handful of DIY psych-folk cassettes for his friends in Austin, Johnson talked his way onto a 1985 MTV Austin music documentary. His outrageous performance caught the attention of well-respected critics and major record labels alike. Not long after, he recorded in NYC at the invitation of Sonic Youth. His success looked assured, until he once again went off his meds, nearly killing himself before he could be committed to a mental institution.

Jump ahead a few years to 1992 and Johnston is all but forgotten. Then Nevermind comes out, "Smells Like Teen Spirit" is playing on radio stations 20 times a day, and Kurt Cobain is wearing a Daniel Johnston "Hello, how are you?" t-shirt to every concert, photo shoot, and awards ceremony. Never before has a t-shirt saved a career. Throw in a couple of songs on the soundtrack to Larry Clark's controversial film Kids, a two-disc cover compilation, The Late Great Daniel Johnston: Discovered Covered, featuring, among others, Bright Eyes, Tom Waits, Beck, and The Flaming Lips, and perhaps the best music documentary ever made, 2006's The Devil and Daniel Johnston, and you've pretty much got the run-down.

Is and Always Was, released last month, is the first studio album by Johnston in seven years, and no doubt his most accessible—whether you think "accessible" is a good thing or not probably depends on what kind of fan you. This time around Johnston's partnered with producer Jason Faulkner, best known for his work with Paul McCartney, which is fitting since Johnston has never been shy about his Beatles mania. You have to hand it to Faulkner, he does a fine job of making someone as idiosyncratic as Johnston sound Major Studio Label professional. Johnston's writing is solid, his singing and performance sounds more confident than ever, and the backing band skillfully underplays, never trying to take too much focus off the frontman. Still, you can't help feeling that something is missing. Songs like "Fake Records of Rock and Roll" and "Queenie the Doggie" are, upon first two or three listens, fun, energetic, wonderfully and playfully executed. Listen a few more times and no doubt your opinion will start to slip (cutesy hand-claps? Obligatory any-70s-band-ever-sounding guitar fill-solos? Really?). Eventually you can't stop thinking half the songs here are little more than inconsequential throwaways, or even shoddy rip-offs.

Of course the few songs that do work really work. The album opener, "Mind Movies," is one of the best Johnston has ever written: thumping acoustic guitar rock turned early Flaming Lips-esque electro-pop. All of Johnston's lyrical themes are here: loneliness, paranoia, longing ("I'm just a psycho trying to write a song"). Still, it's the perfect set-up. As Nick Neyland wrote in his review for Drowned in Sound:

It’s a neat way of ushering nervous longstanding listeners into this brave new world, whose natural reflex may have been to scurry back to a weatherworn Yip/Jump Music cassette if the country-fied slide guitar rock of ‘Freedom’ had been the opener.

Maybe what it comes down to is that with a full band and a skilled producer, Johnston just isn't Johnston. He doesn't sound fragile enough. He doesn't sound broken. He's never been a particularly accomplished musician—when, in the 80s, he switched from piano to guitar as a main instrument, he barely learned a few chords before he started on new recordings—but that kind of rawness more often than not worked to his favor.

Likewise, no one would claim he has a great voice (though on Is and Always Was it's aged into something approaching listenable). And he surely gets way too much praise as a songwriter: For the handful of brilliant, sly, “why didn't I think of that?” lines, there's plenty of sloppy obviousness to be found. That Cobain once called him "the greatest songwriter on Earth" strikes me as pretty funny, considering Cobain himself was hardly a lyrical genius. Still, between "Mind Movies," the new version of fan-favorite "I Had Lost My Mind," "Lost In My Infinite Memory" and "Light of Day," there's enough here to make Is and Always Was a good effort.

Devoted fans will buy Is and Always Was anyway, and there's probably enough here for casual listeners and anyone who never really got into Johnston's stuff. It's not exactly the best starting point, but if you've seen The Devil and Daniel Johnston or know a few of his songs, Is and Always Was is still worth checking out.