Kali Bahlu and the limits of hippie assimilation. 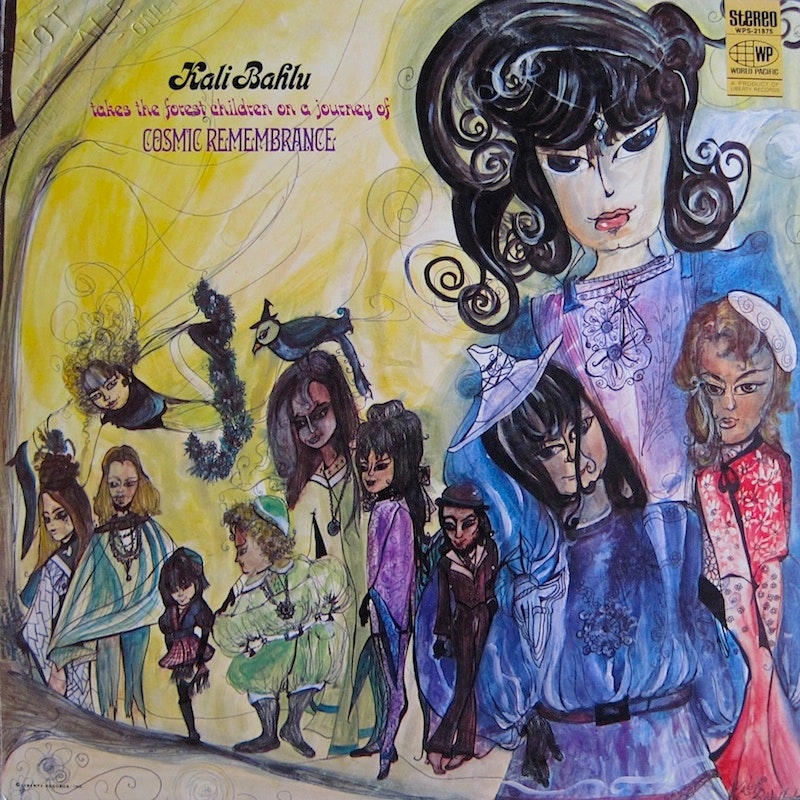 Kali Bahlu Takes the Flower Children on a Journey of Cosmic Remembrance is a name that sounds like it should be a parody of drugged-out hippie nonsense. So does the album itself, for that matter: a grating helium-fueled so-cute-you-want-to-strangle-her-with-her-unwashed-coiffure-little-girl voice prattles on and on and on and on for 38 minutes, gushing woozy spiritual drivel, New Age blather, and fairy tales that stumble off blearily into the cosmos as sitars and electronics and flutes provide earnest Eastern psychedelic backing. Man.

Even the cover art is perfect—multi-skin-toned child-creatures in diaphanous Eastern-wear cluster smilingly against a background of swirling colors. If you had to reverse engineer the cover that Prince was inspired by when he made his iconic retro-psychedelic cover for Around the World in A Day, this is exactly what you'd come up with. You get a contact high just looking at it.

Like I said, the whole package could be a parody… except it's a little too preposterous. And indeed, it's genuine: an honest-to-God document from the Age of Aquarius, released in 1967 and rereleased towards the end of last year on the inevitably-named Kismet label.

Even given the retro-folk love of recent years, it's a little hard to believe that anyone wanted to put this out. Certainly, there's an initial kick to realizing that everything everyone ever said about the hippies was true. But you get over that after the first couple of minutes—and then there's another half hour of oppressively cheerful nonsense and occasional yodeling. The low point is probably at the beginning of "Cosmic Remembrance," where Bahlu imitates a cranky brat. "I'm tired of not playing any games! I'm tired of having to be good all the time!" Thanks Kali, but I have my own eight-year-old to whine at me; I don't need the experience simulated.

But though I doubt I'll ever really need to listen to this again, there is a certain charm to knowing that it exists. The hippie aesthetic has been so thoroughly incorporated into our society that it's hard to tell whether it swallowed capitalism or the other way around. The only thing we sell these days is culture; we're all peddling far out experiences to one another in an increasingly desperate hipster clusterfuck. Everybody from Beirut to Britney sounds like the Beatles; the biggest video game on the market involves birds fighting pigs in an orgy of kiddie drug humor; phalanxes of business gurus go with the flow to think outside of the box.

And then along comes Kali Bahlu and reminds us that "hippie" doesn't just have to mean a successful marketing campaign for interminable pointless meandering. It can also mean interminable, pointless meandering without the successful marketing campaign. I'm not enough of a punk fan to think that irritating music is itself a sign of aesthetic genius. But when all the world has gone nuts, it's nice to find at least one piece of cultural detritus that seems capable, if only briefly, of filling the retro hordes with buyer's remorse.