An Open Letter to Jennifer Hudson

We know you can sing, but can you be a diva? 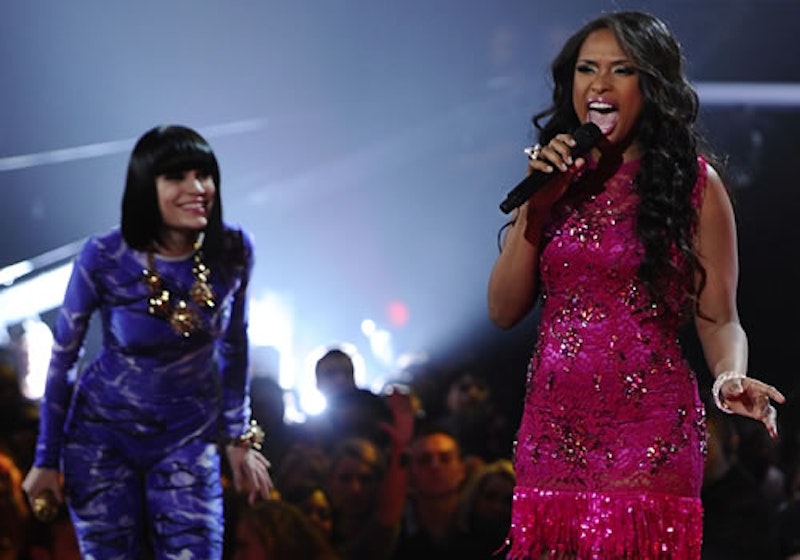 I was getting my hair done by Doniqua up in the Bronx last week and the whole time all we talked about was the 2011 VH1 “Divas” special. You know how gossip flies when you’re in the beauty shop: “Oooo, child! Did you see Jennifer Hudson? She know she is trying too hard to be Beyoncé.” I actually hadn’t seen the “Divas” special yet—I know, bad gay—so as soon as I got home I opened up my YouTube so I could see what all the fuss was about. And what did I see? Why, none other than an extremely Jenny Craig-ified, feathered weave-wearing Jennifer Hudson singing and working the stage to her brand new, David Guetta-produced dance jam, “Night of Your Life.” Then it dawned on me: this is the Jennifer Hudson I’ve been waiting for.

I’m in love with “Night of Your Life,” and every time I play it I realize that Hudson has never had a “hit.” I don’t think I’ve ever listened to any J.Hud song like I’m listening to “NYL.” Sure, both of J.Hud’s previous albums—her debut, Jennifer Hudson, and the more recent I Remember Me—spawned a few songs that got some decent radio airplay, but for the most part these ballads were nothing to remember or write home about. There’s nothing explicitly wrong with the slow ballad genre that summarizes J.Hud’s previous work except when it’s the only one that black female pop stars are expected to sing in. We always expect the black girl to sing like she’s in church: that’s you Fantasia Barrino.

It’s a shame that a singer as gifted as J. Hud wastes her talent on slow, sing-song, R&B ballads. Everybody knows that Hudson can sing. Whenever that commercial comes on where she’s going, “Sun in the skyyyy, you know how I feeeeeeel” I’m like, bitch you better get it. I mean really, this former American Idol nobody grabbed an Oscar and out-did Beyonce in Dreamgirls on the basis of her vocal acrobatics, showing Bey that she’s not the only chick in the pop music game. But no matter how desperately J.Hud wanted to be a star back then—not a movie star but a pop star, because she’s just not that great an actress—I’m not sure if any of her people told her that she needed a drastic makeover of body and image first. Beyoncé already had the body, the voice, and the image. Jennifer just had the voice.

Until now. Yes, now that Jennifer Hudson is fabulous, I think she needs to take her new body (but don’t get any skinnier, bitch!) and her amazing weave and her powerful voice and her connection to music producers like David Guetta, she needs to take all this new fabulousness to rebrand her pop star image as a dance music diva, going the way of Deborah Cox, Donna Summer, Kelis, and Kelly Rowland. If Hudson became known as the upbeat, soulful voice behind the gyrating, relentless dance music powering your night at the club, she would be reintroduced to us as an unstoppable powerhouse and would finally step out of Beyoncé’s shadow and become the pop star she deserves to be. And most importantly, she would avoid the fate of other American Idol contestants who always fall off the face of the earth and end up on Celebrity Apprentice, Clay Aiken.

I will not be satisfied unless Hudson’s next album is an upbeat, David Guetta-or-somebody-like-him-produced album of catchy dance songs with powerful vocals. America, and Europe especially, loves dance music by black disco divas with huge voices, and I’m seeing a window for J.Hud to become the new Donna Summer! Sure, we already have Rihanna doing this stuff, but let’s be real: Rihanna can’t sing. But if you listen to “Night of Your Life,” which pairs David Guetta’s obsessive production values with J.Hud’s ridiculous vocals, you get the best of both worlds. Watching her sing this song live on “Divas,” she not only blew it out of the park, like it was a piece of cake, but you can tell that J.Hud has learned a lot about performance since her American Idol days. Now she knows how to work the crowd which, annoyingly, a number of amateur performers don’t understand. She engages with the audience, and though she’s not necessarily a dancer, she’s got some choreography up in there, too! If her performance on “Divas” was a test, she proved that she can handle pop super stardom, and I’m ready for her to step up to the plate or, even better, into the lace front.

We do not need any more divas singing ballads in front of microphones! Well, that’s not true. But what I mean is that singing in front of a microphone might be one of the easiest ways to perform live. You’ve already got the voice. You’ve obviously practiced. All you have to do is get the words out. Pop superstardom is much harder than that: it demands something more taxing. You need to sing, you need to emote, you need to work the audience, you need to ad lib, you need to dance—you need to be able to do all this and still look fabulous. Jennifer Hudson has shown that now, finally, she can do it all, so let’s hope that in 2012 Beyoncé has a reason to watch her back.