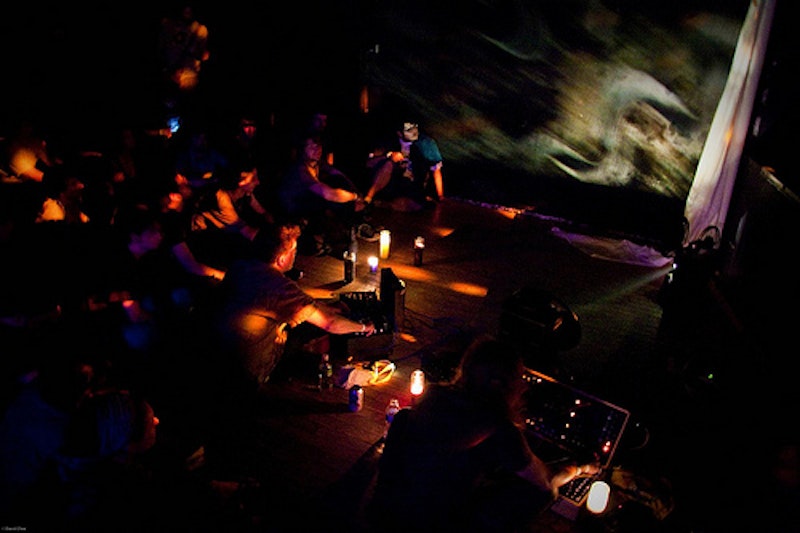 No special guests crowd Zion Traveler (Baked Tapes). No histrionic vocalists. No horn blats. No unorthodox sonic techniques. No diabolical themes. The latest from NYC/NOLA duo Telecult Powers isn’t an exceptionally psychedelic or noise-drenched album, either, and that’s just fine. Witchbeam! and Mister Matthews boast a diverse and staggering range of one-off collaborations, side projects, and solo guises, but as Traveler demonstrates, they’re at their snakeskin-crawling best when clashing homemade synthesizer tones like irradiated fencing foils.

It isn’t uncommon for Telecult records to fumbling their way out of pensive quiescence and into scratched-static being; in a sense, their psychotropic contusions always seem to arrive from below. Instead Traveler descends from above. “Thoughts Through Space” opens with a stratospheric one-two punch – beckoning, angelic organ chords that lap one another like docile Dobermans, synths that simulate and mock bird songs, all of it lovingly looped—as though clouds are slowly parting, revealing a blinding white sky. So far, so New Age: a gong’s tremulous din rippling outward in perpetuity, wavelength nirvana, and synthesizer laser-warfare. Then “Spirit Telephone” face-lifts and deepens the duo’s idiosyncratic barbed-drone throb, a hypnotic mineshaft of slicing feedback, competing fields of distortion, and the sort of irregular synth rattles that can’t quite decide whether they’re accents or percussion, and “Space Through Thoughts” mimes the wigged-out frequencies that closed out “Thoughts Through Space.”

Phrases like “game-changing” don’t really apply here; compared to bygone consciousness-erasers like Dedicated To Robert Moore/Twilight of the Oscillators, Traveler is much less likely to foster the illusion of slowly touring the cosmos in an manageably altered state. What this album provides in spades: a slightly burnt sense of wonder, a degree of spiritualist comfort, a malevolent euphoria, their augurs revolving slowly now and pushing further, beyond occult malice and towards something more.