Beck could change a snow tire with a guitar, so train effects aren’t that much of a stretch. 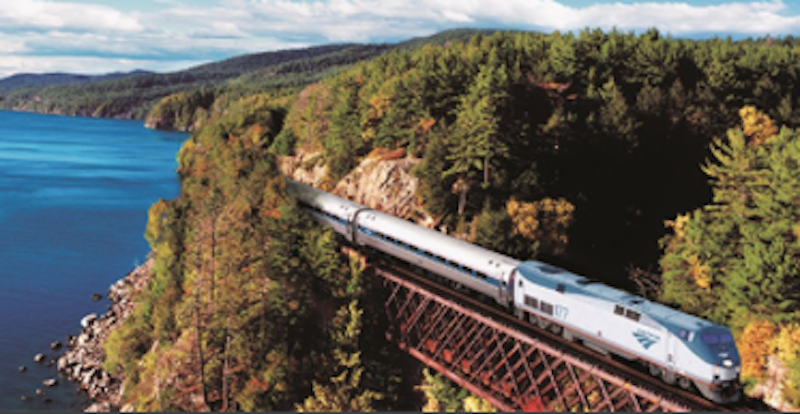 It’s about 3000 miles from Boston to San Diego. That’s where the wedding was. Nothing much happens until you get out of Chicago, which has a beautiful train station designed by Daniel Burnham (also Manhattan’s Flatiron Building). The trains aren’t first-rate, but they got me thinking about some of my favorite “train” songs, and the black people who left the South for Chicago and developed electric blues, and the white guys, mostly Brits, who took those songs and made them their own. There are probably hundreds of such songs, and one hates to think about all those that were never recorded, and lost to posterity.

Robert Johnson recorded several versions of “Love In Vain Blues,” which he wrote in 1937. Covered many times by the likes of Keb’ Mo’, Eric Clapton (who in my opinion always wished he’d been born Robert Johnson), and Robert Lockwood Jr. It became a staple on the Stones tours during the Mick Taylor years. My favorite is a bootleg version from Madison Square Garden in 1972. Luckily it, and many other versions, is on You Tube so I don’t have to wear out my vinyl.

“Train Kept ‘a Rollin’” is attributed to Tiny Bradshaw and his 1951 recording. It was a big hit for Aerosmith early on, and I wondered how their guitarists had become so good, because the first time I saw them was at the high school battle of the bands for a dollar, and I wasn’t sure how far they could get as Stones clones. Turns out the audience noise was dubbed in the Aerosmith track, and the guitar work was done by Steve Hunter and Dick Wagner, the two monsters who backed Lou Reed during his Rock ‘n’ Roll Animal period, and then went as a pair to Alice Cooper. But the Aerosmith version is still a great rocker.

One sees massive rural poverty from the train, presumably because the rails go through less desirable areas. Miles and miles of farmland, of course. But also individual properties with rusted-out old cars, ruined boats, old campers and trailers, dilapidated fencing, rotting tin carports. Being poor is one thing, but surrendering to the point of living among your old trash seemed heartbreaking. It’s not just the Midwest; I’ve seen a lot of that stuff in rural New England. I asked my sister what they grow out West, and she said, “Conservatives.”

“Last Train To Clarksville” wasn’t written or performed by the Monkees. What can I say? It’s a clever pop tune, in keeping with that band’s general reason for existing. Hard to believe Jimi Hendrix opened for them for a few dates in 1967. I’ll confess to having watched the television show as a lad and liking their songs.

The train stopped in Lamy, New Mexico to take on more passengers, and I can’t recommend “meeting interesting people” as a reason to travel by rail. The cops had to come and take one loudmouth off the train for spouting on about Trump and Jesus at full volume. Another pair claiming to be Amish, quit school after eighth grade because there was no need to learn arithmetic, history or science. They bullshitted each other for days on end, and I had no idea what to make of them. It made me wish there was an intelligence test, or even a reality check, for voting.

“Train Train” by the second Jeff Beck group, the Rough & Ready guys. Man, that was a tight band, with Cozy Powell on drums and Clive Chapman on bass. Those two and Beck on guitar come together to create a great, rhythm-driven train feeling. As I’ve written elsewhere, Beck could change a snow tire with a guitar, so train effects aren’t that much of a stretch. Also, gotta dig the back-up girls with their train whistle harmonies.

Not much to recommend about Lamy except this historical detail: Many of the atomic bomb crew arrived there on the way to Los Alamos, signing in under false names. I would’ve loved to be working at that station back then, knowing what I know now about the bomb. Also would’ve loved to see the test model go off in 1945. Massive trains with a hundred cars. Coal, steel, timber, 130-foot wind turbine blades, grain, cattle, four or five engines tugging heavily. Amtrak leases track time and sometimes we had to wait for freight to pass.

“Hear my Train a Comin’” by the aforementioned Hendrix exists in several live versions, but my favorite is a 12-string acoustic number he does, sitting on a barstool. Jimi gets a false start, asks the camera guy to quit wasting film. Magnificent work, and at the end, Jimi asks the crew, “You didn’t think I could do that?” Well, of course he could. Watch this if you think Hendrix was all about feedback and volume (which he was). It’d be impossible to play this song the same way twice.

“Station To Station.” This song belongs to Earl Slick, the original guitarist on the Bowie record, who did a fabulous job with the train sounds intro. Some kind of contractual snafu prevented him from joining that album’s tour. “Fly like a demon from station to station.” I saw Stacy Heyden do very well with the trains; we arrived early and could hear him working out the trains through the arena doors. I was less impressed with Adrien Belew’s version. I love the guy, but his tonal introduction didn’t cut it, screeching-train-horn wise.

My suitcase was stolen upon arrival in San Marcos, and I had to go out immediately and buy a new set of wedding duds. The wedding and the landscapes were great. I hadn’t seen cactus since my last trip out there, circa 1973. Probably more drinking than necessary, by all concerned. My partner’s daughter was the bride, and I took the train out there because I don’t fly. Four days and three nights, each way. I slept in my chair because Amtrak wanted several thousand bucks for a sleeper. Ate a lot of Hebrew National hotdogs, and had no fruit or vegetables for days on end.

“Train Coming Round The Bend,” from the Velvet Underground’s album Loaded. “I’m sick of the trees, take me to the city, train coming ‘round the bend.” Probably not a true train/blues number, but a great tune from a great record. It was called Loadednot because the band were high, but because the producers asked for a record loaded with hits. Which they got.

The highlight, ride-wise, was the several hours’ return trip across the canyons of New Mexico. It’s part of the Chihuahuan desert, and was beautiful. No settlements anywhere that I could see. No water, either. Huge formations of stratified rock, colored with oxides of manganese and iron. I gave up taking pictures with my phone, because the camera’s incapable of capturing the scale. This part of the trip needed a car or camper, binoculars, and a serious camera. I’m guessing that glaciers and water runoff from millennia ago sculpted the geology.

I’ll end with “All Down The Line” from Exile on Main Street. Keith Richards’ rhythm guitar gets the cadence just right for train wheels hitting the welds, and Taylor’s slide work is out of this world. If you don’t agree, I can’t help you.