Chris Stapleton Punches Ticket to the Hall of Fame

Starting Over is a return to form for the singingest motherfucker America has ever produced. 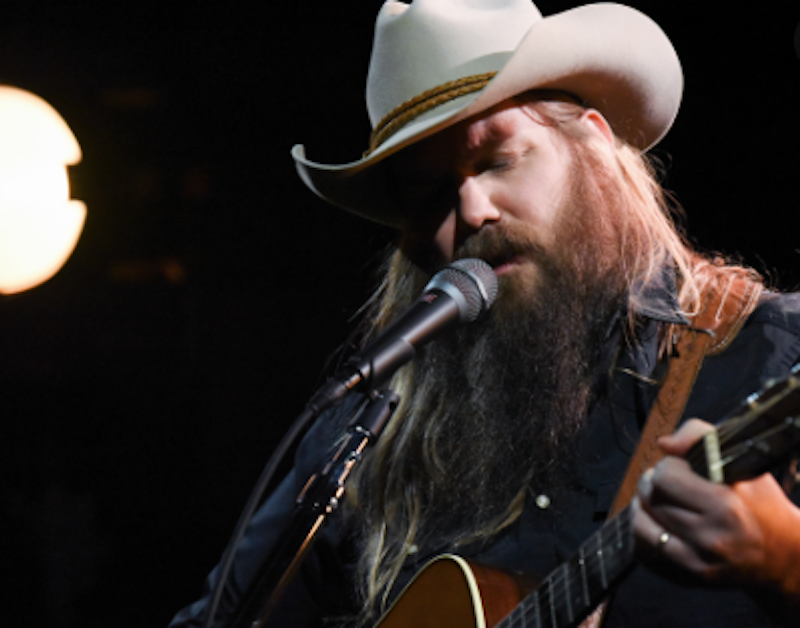 Chris Stapleton's Traveller (2015) is almost the only candidate for the best country album of the 2010s, and was the steadiest seller; years later it still floats up into the Top 10 (right now it's #3 on iTunes). It was also an anomaly when it was issued, as bro-country was utterly dominant with its electronic click tracks, pale "rapping," vocal effects, and abject lyrics about the wonders of beer and scopophilia.

Somehow that era holds on, and the title cut on Stapleton's new album, Starting Over, which is all over country radio (and also in an ad for Dodge pickup trucks in heavy rotation on ESPN), simply makes no sense sandwiched between Sam Hunt and Dan + Shay. It's a plain, traditional song, the hook a simple acoustic strum. The voice is unaltered, which is good, for no alteration could possibly improve the voice of Chris Stapleton, the singingest motherfucker America has ever produced.

Everyone who listened to all those hit singles from Traveller on the radio had to hear it as a criticism of and treatment for the state of country music, but they also had to hear it as a masterpiece; there was no denying that one. It won all the awards and outsold everything, but it didn't quite lead to the neo-neo-traditionalist uprising for which I was hoping (though “Stapleton” turned into an instant sub-genre).

I was disappointed with the follow-ups, From a Roomvolumes 1 and 2 (2017). True, it was Stapleton, and he was singing pretty solid songs, though also hitting some pretty clichéd themes, as on the single "Broken Halos." Looking back, I might’ve underrated these albums a bit; they had great moments, and if I hadn't brought to them stratospheric expectations formed by Traveller, I'd have top tenned them that year.

Starting Over is a return to the stratosphere. The songs are consistently strong, and many of them sound like standards. For example, by the second time I heard the title cut (not the best on the album), it was already as though I was remembering it from my youth. And in 20 years, those of you who are still around will still be hearing a number of these songs.

The songs on Starting Over also fully showcase Stapleton the overwhelmingly excellent singer in every dimension, which the songs on In a Roomdidn’t. I hear him as a soul or even gospel singer, and I'd compare him to Adele, who covered one of his great songs long before Traveller made him famous. What kills you in both cases is the combination of awe-inspiring power with effortless tunefulness; wherever either of them flies, it’s right.

I'd certainly count Chris Stapleton as one of the greatest singers in the history of country music, but he's kind of hard to compare to some of the others: George Jones, say, has an incomparable emotional intensity created by subtle deflections of pitch and timing. Stapleton blows like a hurricane. It's like trying to figure out whether Joni Mitchell or Janis Joplin is the better singer; they're just not doing the same sort of thing. At any rate, I might not have expected one of the greatest country singers—a Johnny, a Hank, a Twitty—to emerge at this late date, but here he is.

Like Adele, Stapleton can sing whatever he pleases, and it's been eclectic. He's rolled blues-oriented bluegrass with the Steeldrivers, and heavy metal with a group called the Jompson Brothers. The new album shows all sorts of rootsy influences, and in particular he's playing around with 1960s and 70s country rock. His voice has a resemblance to John Fogerty's, and he summons Creedence several times, as on "Arkansas," which is liable to end up as the state song. There are touches of the Band throughout ("Maggie's Song" might draw a lawsuit from Robbie Robertson, so similar is it tune-wise to "The Weight"), and Jerry Garcia-ish guitar flourishes. He's got Heartbreakers Benmont Tench and Mike Campbell on board for several very traditional-sounding rockers.

The whole emerges into a coherent and pleasurable suite of traditional-style songs, with changes of mood and tempo to keep you attentive and unirritated. There are beautiful love songs (no doubt aimed at his wife and harmonist Morgane), party songs, sad songs. The point in any case really has got to be the emotional range and intensity of Stapleton's singing; this album frames that up beautifully over and over again.

So if there was a bit of dip in the hall-of-fame-bound career of Chris Stapleton, American master, that dip’s over. People get the next nine years to try to top this sucker for the best of the 2020s. Good luck!