An interview with archivist Dave Henderson on The Cramps' incredibly strange America. 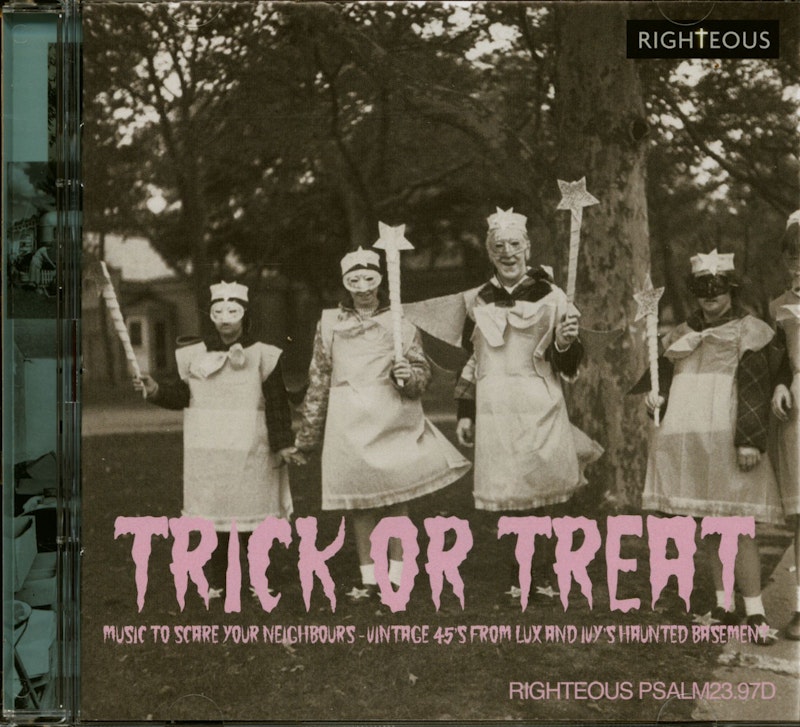 Like generations of punk and rock fanatics before him, The Cramps’ seminal work thrust Dave Henderson into a sonic wormhole where the band’s own recordings and their haywire influences revealed the enduring American bond of supernatural iconography and lowbrow excess. This realm is a lot easier to find now thanks to the comprehensive series of affordable and carefully-curated Righteous CD compilations featuring the “gravest hits” from The Cramps’ treasure trove.

While taking a break from scrubbing the Goo Goo Muck residue off a few Ronnie Cook discs, Henderson was kind enough to grant an interview all about his ambitious archival efforts.

Splice Today: What inspired you to start the Righteous record label?

Dave Henderson: Originally, Richard Hawley had been raving about an album by Waylon Jennings and the folk group The Kimberlys. I found it and it was great so I spoke to Cherry Red about the idea of licensing and re-issuing it. Then that followed a series of releases that people had turned me on to that weren’t out on CD. I’ve always been interested in people’s personal favorite records.

ST: How did you get the idea to start reissuing the contents of The Cramps’ record collection? Did you already know the band members beforehand?

DH: A guy with a load of tattoos used to cut my hair in Camden and he’d invariably say, have you heard this or that, from exotica to weird voice experiments like Yat-Kha. One day he said, “Have you heard The Purple Knif Show, it was a radio show with (Cramps’ vocalist) Lux Interior in his best Mad Daddy style spinning some really odd 45s.” I’d been obsessed with (RE/Search Publications’) Incredibly Strange Music book and fascinated by the pic of Lux and Ivy in their record lair, I just wanted to know what they were listening to and, I guess through the Internet and friends I started to amass records they were raving about, going to places like Sounds That Swing in Camden or Intoxica in Notting Hill or buying them from any place I could find.

ST: Were you aware of earlier releases that shared the concept of your label’s compilations? (i.e., The Vip Vop Tapes series, the Born Bad compilations, the Songs The Cramps Taught Us series) If so, what were your opinions of these records?

DH: I picked up on those releases but being a sucker for a story I wanted to know more about the people who made the original records> I was fascinated by what it was like to sit in a studio and produce such crazy things. Hence the research and the lengthy sleeve notes that invariably have to be cut down. The other thing with music like this is that one thing leads to another, so I’m drowning in lots of strange music, from industrial and electronica to northern soul, old r ‘n’ b, swing, pop, exotica—there’s just so much out there.

ST: Some of the Cramps related collections you’ve issued state that the records reissued therein come from Lux & Ivy’s collection. Others come from (and I quote text from your record covers here) “The Cramps’ crazy collection.” Other than Lux Interior and Ivy Rorschach, which other Cramps members (if any) have helped to curate your releases? And how involved were/are the band members in helping you to compile these releases?

DH: I’ve read their thoughts and lists of cool tunes in fanzines and books over the years, carefully making a note every time a record is mentioned so I can check it out. “Lux And Ivy” has become shorthand for a certain type of record and I think that even though the collections move through all kinds of music, they hang together pretty well.

ST: What technical process is involved with the reissuing of records from The Cramps collection? Are most of the records compiled mastered direct from vinyl? Or do most of them feature material copied from original master tapes? Or is it an even mix of both?

DH: Most of these master tapes are long gone, so it’s another kind of detective job to find good enough copies, then I work with Alan Wilson to get the best out of each version. There have been some that we’ve just had to scrap. Which is sad. But things come out of the woodwork all the time. Alan’s currently working through 67 tea chests of tapes from the Joe Meek archive—now that’s another thing that intrigues me.

ST: What can you tell me about the Band Box label 45 “Sinners” by Freddie & The Hitch Hikers? Of all the records unearthed by The Cramps this one really sticks out for me, and it’s also one of the most interesting and unusual of all the records featured on your double CD set 60 Songs From The Cramps Crazy Collection.

DH: I know nothing about that one other than the legend that the label got the name wrong and they’re actually Johnny And The Hitchhikers, who recorded as a backing band at the label. There’s this great site with loads of stuff on it about Band Box that’s probably the only source.

ST: What are some of your personal favorite tracks that were discovered through The Cramps repertoire or through their record collection?

DH: It’s impossible to single out tracks. A lot of the excitement of the tracks Lux and Ivy turned me onto comes from the bizarre juxtaposition between songs, how every piece of exotica nestles next to a piece of wild rockabilly, how a mindless rant fits perfectly with a greasy guitar-led instrumental, along with the inevitable questions, “Why did they do that? And, why did they use that instrument? Or indeed, what does it all mean?”

There are pure gems though that demand repeated plays: The novelty pop of The Five Blobs’ “From The Top Of Your Guggle (To The Bottom Of Your Zooch)” and “Tight Skirt Tight Sweater” by The Versatones are timeless, as is “Transfusion” by Nervous Norvus, the doo-wop of Sheriff And The Revels’ “Shombolar,” Mike Page’s hip “Long Black Car” and the rambunctious blast of Glenn And Christy’s “Wombat Twist” are earworms you’ll never forget, as are any of the beatnik sides from Ed Byrne to Kenneth Patchen. As the vast majority of the tracks were on seven-inch 45s, it’s like the artist was thinking, “How can I screw with the listener’s brain in under three minutes?” I like that idea a lot.

ST: The critic Greil Marcus used the term “The Old Weird America” to describe what Bob Dylan and The Band were singing about on “The Basement Tapes.” Would you say that within both The Cramps’ record collection and their own body of work there’s a thread that reflects a similar cultural landscape?

DH: I think Dylan wrote about weird America as a voyeur, producing a great literary prose about the tribulations of a country. It always struck me that, by contrast, The Cramps were actually living the life, pushing themselves to the edge and embracing the madness of the country—after all they actually played in an asylum, one of the weirdest clips ever, and a whole site more exciting than footage of when they performed live at some faceless festival.

Cramps music is in your face. Sometimes you just want to put on “Can Your Pussy Do The Dog?” because it annoys people and destroys the monotony; it’s loud, brash, a blast of attitude—we need that. It’s like listening to Throbbing Gristle’s “Discipline” 12-inch, “Tears” by Lee Roye, “The Rubber Room” by Porter Wagoner, “Rites Of Diablo” by Johnny Richards, or Danzig’s second album, or anything that’s an explosion of emotion. It’s a cathartic experience that makes life worth living.