A band that sounds a lot like your crotchety neighbor but way younger and gnarlier. 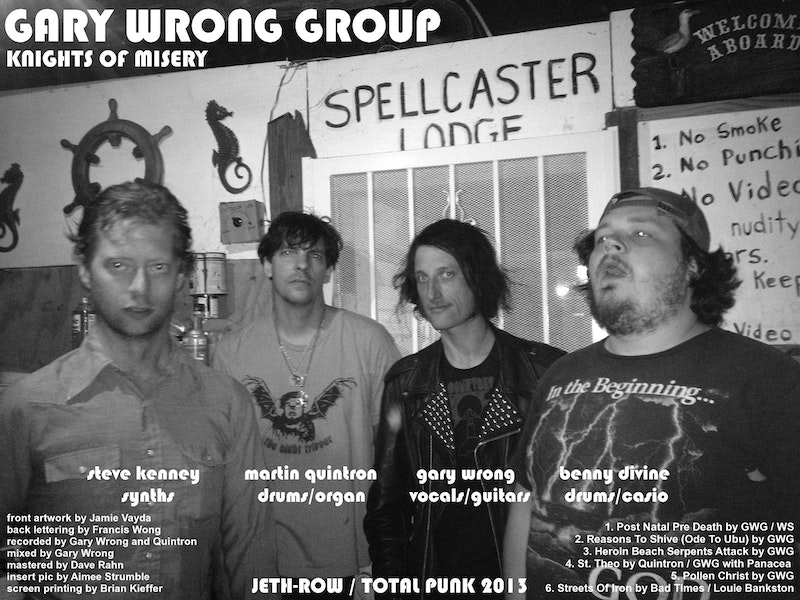 The best introduction to New Orleans' Gary Wrong Group is through the videos released in advance of their debut mini-album, Knights of Misery (Jeth-Row/Total Punk). These videos are, arguably, risible, and in high camp, fetishizing danger and weaponry, and appear to endorse Ian Svenonius' theory, in Supernatural Strategies for Making a Rock 'n' Roll Group, that rock bands essentially evolved from street gangs. The treatment for "Heroin Beach Serpents Attack" is expertly directed: three-quarters NRA/militia aspirant porn, one-quarter biker accessory wank, a Hunter S. Thompson fever dream. The music, meanwhile, throbs and chugs with a blunted surrealism, rough garage rock intercut with spooky, alien splinters of organ, synthesizers, and casios; the vocals are a lemon-sucking, pitch-screwed, self-cannibalizing font of misanthropy that lashes out cartoonishly at androgyny, "Commies," and "wiggers." This ugliness is captivating; it's hell to tear away from.

Joey Ramone, Calvin Johnson, Mark E. Smith, and Misfits-era Glenn Danzig surface as influences on Gary Wrong's singing style, a corroded growl that neatly stalks melody lines and refuses to be tuned out, no matter how much one focuses on the instrumental dust being kicked up around it. "Post Natal Pre Death" tumbles into view out of vapor, a Frankenstein of cattle-prod-jolt guitar stalk and echo-drowned yo-yo vocal pre-set assault that’s happy to elbow anyone and everyone the way back to the bar; it's pure menace. Fueled by a filthy, meaty riff and spindled chords, "Reasons to Shive (Ode to Ubu)" could be an outtake from Leave Home, while the gnarly-catchy "Pollen Christ"—love that revving ignition-mimicking hook, and the Multiple Man polyphonic vibe—owes as much to psyche-pop as it does to metal; every facet of "Streets of Iron," which is a bit reminiscent of The Emirs, seems to gargle asphalt.

Give Knights of Misery this: sympathize with its politics or don't, but it gets under your skin, haunts your dreams with the sort of mean-drunk dissonance that used to make Black Rebel Motorcycle Club and The Icarus Line such a no-brainer for so many.