On David Crosby's new album and embracing the underappreciated genre. 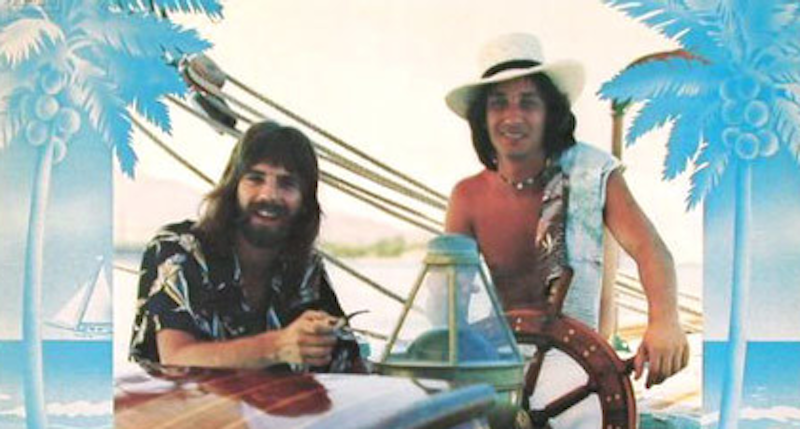 For every late-60s band of white guys who grew out their hair and pummeled blues riffs, there was another group that chose to channel a softer side of R&B. Borrowing funk’s elastic bass-lines, but not its aggression, leaning on soul’s vocal dexterity, but leaving behind its overpowering directness, the latter set of artists created what became known as “yacht rock.” The blues aficionados get a bigger section in the history books: Led Zeppelin and the Allman Brothers are stamped as serious artists more so than Hall and Oates or Boz Scaggs (who switched allegiance from rough to smooth, as did Eric Clapton later in his career). But fundamentally, both sets of artists were doing the same thing—reworking black music.

While a lot of yacht rock came from New York’s finest studios and what Village Voice critics like Robert Christgau and Nelson George used to refer disparagingly to as “El Lay,” it was not solely a project of actual yachters or those who could see yachts out of their windows: it also came from one of the bastions of southern soul in Muscle Shoals, Alabama. Played by crack musicians in snazzy studios, regardless of location, the music drips with money and comfort, hence the “yacht.” It was music for white people and by white singers, so it earned the “rock” label. Sometimes it’s called “blue-eyed soul,” perhaps with more favorable connotations. “Soft rock” also gets thrown around. People are quick to dismiss yacht rock or use the term as an insult, suggesting style without substance, cookie-cutter commercial schlock, though that puts you on a slippery slope. Some people love and respect Paul Simon, but he definitely went through a yacht rock period: see much of his 70s work. The same goes for Paul McCartney.

It would be hard to prove that yacht rock ever really left. It splintered into different strands like adult contemporary, got partially recaptured by black artists like Lionel Richie in the late-70s and early-80s during the post-disco burst of black pop crossover, and battled with a technological shift towards smaller bands and drum machines. Regardless: yacht rock is in, and Daft Punk isn’t alone. The band inc. signed to prestigious indie label 4AD, came by their yacht rock influences (such as 70s Elton John) the old-fashioned way, by working their way up as session musicians for singers like Robin Thicke. Chromeo, a duo releasing a new album in April, stands to benefit from this development in taste. They’ve been exploiting parts of the blue-eyed yacht/soft soul/rock sound for years, either way ahead of the curve or so far behind it that they’re back in style.

So it’s probably not a coincidence that this year David Crosby released his first solo album, Croz, in two decades. Sure, he’s traditionally labelled folk, not funk, but as a key member of the Laurel Canyon scene—which included Jackson Browne, Linda Ronstadt, and the Eagles—he helped lay down the groundwork for yacht rock. Stephen Stills, another important cog in that scene, played drums on the Bee Gees' “You Should Be Dancing,” which might be termed “yacht disco.” The Eagles’ “One Of These Nights” would also fit that category. Joni Mitchell, who travelled in these circles, recorded the don’t-rock-the-boat-funk of “Help Me” for her 1974 album Court And Spark.

Croz opens with “What's Broken,” which may be the grooviest thing this singer has ever been attached to. Flitting drums lead the way, lines of clean electric guitar and prominent pools of bass fill in the skeleton. Then he adds the trademark harmonies: voices keep piling up, higher and higher, seven or eight layers, growing and growing before dropping away. He knows he’s on to something with this—he likes the “What’s Broken” template so much he recycles it wholesale on the song “Radio.” “Dangerous Night” also works on a minimally funky rhythm and pleasant harmonies, while “Find A Heart” pulls in some saxophone in its middle section. Movement is a possibility in these songs, though it’s not explicitly encouraged. (For a different feel, “Set That Baggage Down” steals its conceit from former bandmate Neil Young’s “Tonight’s the Night.”)

The Numero label, better known for its efforts to give under-appreciated soul a second life, is also involved with yacht rock. For Record Store Day several years ago, they put together a compilation described as “an ode to radio station compilation albums of yore... smooth rock, AOR [Album-Oriented Rock], easy glide, hot tub soul, and earnest yacht rock sailing gentle radio waves.” In April, the label is releasing a collection of songs by Ned Doheny, a onetime Laurel Canyon regular—Crosby is quoted in the press release saying that “any musician…will…tell you they have always dug” Doheny—who never broke through in the manner of his comrades.

Doheny is a fringe figure despite some impressive credits and the right friends. Cass Elliot, formerly of the Mamas and the Papas, sang a Doheny composition, as did the Average White Band (Doheny co-wrote several songs with a member of AWB), Millie Jackson, Chaka Khan, and George Benson. All those artists had great success in the late-70s and early-80s—Chaka Khan took Doheny’s “What Cha’ Gonna Do For Me” to #1 on the R&B charts. Doheny also played guitar for Johnny Rivers, and Warren Zevon, who transitioned from backup musician and songwriter to solo star.

Separate Oceans fills out selections from Doheny’s two albums with various demos. The Doheny sound is full of stabbing electric keys, harmless innuendo—“Get it up for Love”—and easy, loping bass. Little flourishes of guitar or keyboard twinkles slip into any space not occupied by high harmonies. The horns come and go, though they sometimes pierce the calm surface of these songs.

Doheny can summon a heavier groove—something like “To Prove My Love”—but he’s better served by an environment like the one he uses in “A Love Of Your Own:” unhurried, mid-tempo. Here, Doheny sings, “The longer it takes, the better you’ll come to know a love of your own,” and his song mimics his advice, with time and space for voice and funky arrangements to unfold and embrace their own richness. Millie Jackson, the successful southern soul singer known for monologues and sexual subject matter, also sang this song, but it doesn’t have the same effect for her, since it’s harder for such a powerful singer to channel the sort of gentle timidity that fits Doheny’s vocal register. At other times, Doheny is the victim of the opposite situation, where his vocals represent a weakness. His take on “Whatcha Gonna Do For Me” is steady but unremarkable. Chaka Khan has the panache to grab the song and drive home its hook, both an aggressive come-on and a plea for help “when the chips are down.”

It’s hard to know why Doheny didn’t earn more of a name for himself. Bad luck? The fickle pop landscape? Too much of that famous laid-back California attitude? Partly, he just wasn’t on the same level as some of his pals—nothing on Separate Oceans matches Jackson Browne’s “These Days” or Warren Zevon’s smash “Werewolves of London.” Though after penning a #1 R&B hit it’s reasonable to assume that Doheny would’ve had more high-powered songwriting opportunities available to him.