A review of Kanye West’s “All Day.” 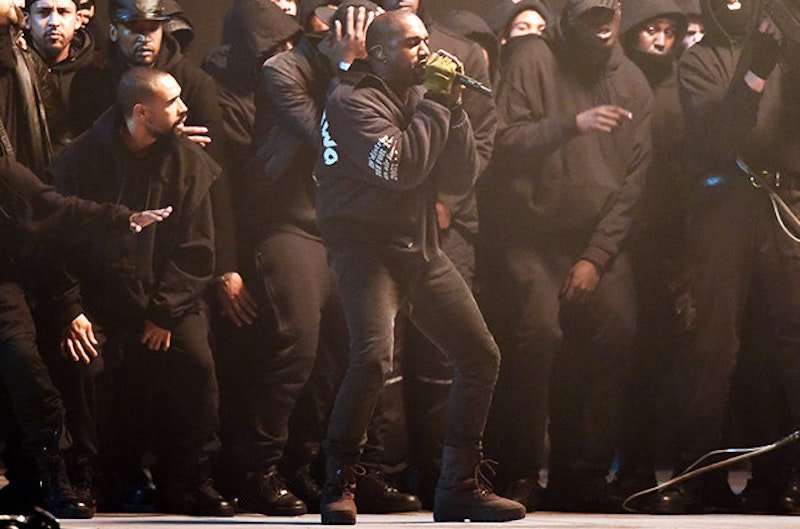 “All Day” represents a significant milestone: it’s the first Kanye West single that resembles an exercise in pure, monomaniacal self-branding, and nothing more. No surprise; surely, it was only a matter of time. One could argue that the Chicago native, rapper, producer, DONDA design impresario and provocateur began down this path circa 2007’s Graduation, when “backpacker Kanye” first yielded to “douchebag Kanye.” Back then, his artistry—yes, I just used that word—was properly entertaining, part and parcel, seemingly, of an idiosyncratically personal adventure that we were all invited to tag along for. So, you know: a plague of functionless sunglasses, cold flossing with Jay-Z, chilling on Oprah’s couch, statuette-blocking Taylor Swift, directing a shitty art film where he raps atop a piano, punching photographers, embarking on a European fashion internship, bagging a porn star then trading up for (and marrying) a Kardashian, etc.

The music, meanwhile, metastasized into bizarre, daring post-rap forms that served to justify his followers’ rapt attention even as he became less of an auteur and more of a curator. I don’t love 2013’s Yeezus—it’s a stunt album that sputters at times in the wake of its own impertinence—but I respect the way it encapsulates its overseer’s raging, unleashed id. With Yeezus and most of its predecessors, then, I was able to buy into whatever the fuck it was that West purported to be about, even as his naked lust for single-name iconography grew more apparent. And it’s not like I loathe “Only One” or “Four Five Seconds”; they’re almost charming, in the way that gospel standards or J.C. Penney’s back-to-school commercials involving copious amounts of denim are charming. “Wolves” is more gesture than anything else; it might as well not even exist.

“All Day,” though, is certainly corporeal and thoroughly charmless, mainly because it’s a half-assed version of what the average punter would expect a prototypical 2015 Kanye West single to sound like, and also because it’s impossible to miss that its release was keyed to the unveiling of the man’s Adidas line. The production, which somehow required enough personnel to staff a small sports stadium, sounds the way an oversized, “ragged” charcoal top looks: drafty, bulky, nasty, just too much. There’s a fevered synth hook whirring along at the core of “All Day”; it’s great, and if Rick Rubin had produced the song, he’d have talked West into reducing the proceedings to just that hook and the vocals. Back in the real world, there’s way too much going on, from gaudy, needless Theophilius London and Allan Kingdom cameos to a whistling, acoustic-strumming Paul McCartney to trigger effects to a wordless, vocodered refrain.

Worse yet is the pummeling banality of SEO-bait punchlines—“like a light-skin slave boy/we in the motherfucking house,” a Louis Farrakhan shout out, unnecessary bows thrown at Sade fans and Dennis Haysbert—moneyed baller boilerplate and a gleeful repetition of the mother of all racial epithets. And since when does Kanye West even need to self-reference his prior glories, Eminem-comeback-single style? He snarls these verses in a rasp that waivers, curiously, between wholesale commitment and bored box-checking. “All Day” – unlike “Power,” “Through the Wire,” or “Heartless” – doesn’t come across as something Kanye absolutely had to express; it’s a more like a stakeholder report he filed because he had to. Offended? Alienated? Rolling your eyes? Good: the brand abides, and maybe a brand is all it is.