On Valerie June's electic new album The Order of Time. 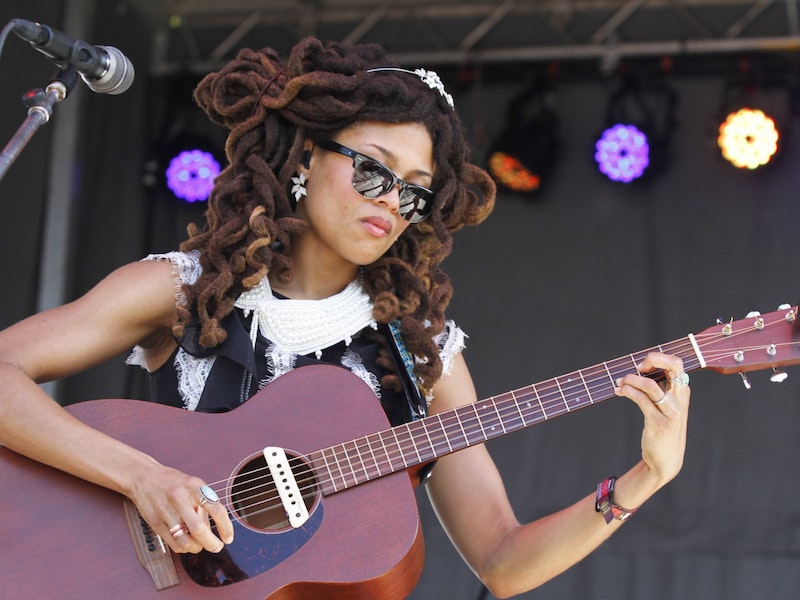 "Tumbling Dice" came on the radio the other day. I asked my son what he thought of it. He was positive, if not enthusiastic. "It's the Rolling Stones," I explained to him. "Oh," he said, and shrugged. My 13-year-old had heard of the Stones—vaguely. He couldn't name any songs though, and didn't really know who Mick Jagger was. My wife asked if he knew “Satisfaction," and he looked at her blankly.

My son’s into music; he's a huge fan of clipping., and I've got him listening to Funkadelic. But the Stones? Their first album came out in 1964, which is about 40 years before he was born. The Stones are farther in the past for him than Robert Johnson's first recordings were for Jagger. "Jumpin' Jack Flash" isn't popular music for my son—it's old fogey, roots music.

If roots music these days is rock, then Valerie June is a fine exemplar of both. Her new album, The Order of Time, isn't on a par with 2013's Pushing Against a Stone. But it's still a superior throwback rock effort, in which she stirs blues, country, and R&B into a tough, swaggering gumbo. June's Tennessee twang has the nasal mountain bite of Sara Carter or Kitty Wells, an acerbic edge that complements her slashing guitar. "Shakedown" is an electric country blues hoedown that would fit on Exile on Main Street, or on one of Chuck Berry's LPs, with its handclaps, call and response, and dirty feedback grunge. "Got Soul" is Memphis Stax on a rural byway with violin and banjo leaning into the horn section. "I'd like to sing you a country tune," June sings, "but I got soul." White and black musical traditions cross-pollinate till you can't tell what's George Jones and what's Otis Redding.

When people talk about rock as a genre, it's generally defined by its aggressive rave-ups. The truth is that June's slow numbers would work as well in a classic rock playlist as her uptempo ones. The boiling groove of "If And" has a dragging ominous clang, like Neil Young via Muddy Waters. "One thing's for sure/one thing that's real/if and you ain't lovin’ your women then someone else will," is a line Zeppelin would have nicked. "Astral Plane" moves more into winsome coffee shop territory. "Dancin' on the astral plane/holy water cleansin' rain/floatin' through the blurred stratosphere/brought me here you see so clear" has the innocence of a Big Star or girl group ballad, while "With You" pairs gentle Nick Drake acoustic guitar with sweeping strings out of a Gamble and Huff production. On the horn-laden R&B of "Slip Slide on By," June stretches out her phrases, moans and then tumbles her syllables together. "Sometimes I get the feelin'/I might be with you tomorrow," she sings in a rush, as if she can't wait to get to that lover waiting for her a day from now.

You could say that June makes real music like they used to, or she's too retro to be relevant, a dinosaur playing guitar in a world full of wooly mammoths with keyboards. People performing in that tradition of guitar-based blues and folk aren't massive stars. Rock isn't what the kids are listening to, as my son reminds me.

"Roll over Beethoven," is a joke, but it's also a statement of intent; the dead musicians are pushed off the bench, the new sound is here. If Jagger isn't dangerous and cool, he looks silly. "Start Me Up" isn't much of an anthem when no one wants to bother turning the crank.

Folk, blues, and country, on the other hand, are more forgiving. Artists in those traditions are supposed to keep it real, not chase the next new thing. And Valerie June's a folk, blues, or country artist—though she's certainly aware, as Berry and Jagger were, that that makes her rock too.