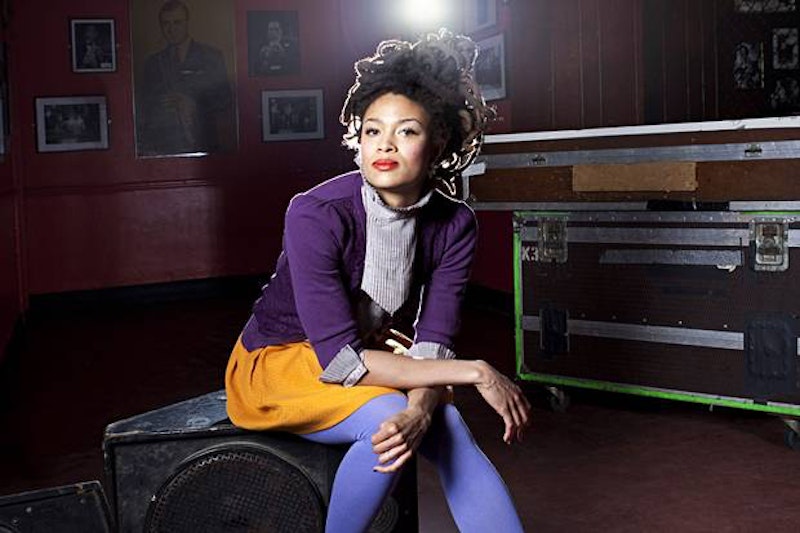 At the dawn of mass-market commercial recordings in the 1920s, record companies divided race records from hillbilly music. The first were intended to target blacks; the second were marketed to rural whites. In many ways, this division was arbitrary; rural black and white music was not that distinct. Recent scholarship has shown that black musicians played on many hillbilly recordings, suggesting that integrated sessions were not that uncommon. Black and white collaboration has continued throughout American music—and yet, at the same time, that race/hillbilly distinction has become a self-fulfilling prophecy. R&B today is a lot different from country, in no small part because the marketing insistence that they had to be different helped create two different, segregated traditions. What could have been one became two.

Valerie June's album from earlier this year, Pushin' Against A Stone, presents a possible version of what might have happened if that split had never happened. The first song, "Workin' Woman Blues," is a barreling, bizarre, perfect mash-up of styles. June starts with a folk-blues percussive strum and then launches into a shattering nasal vocal that would do Sara Carter proud. "I ain't fit to be no mother/I ain't fit to be no wife/I been workin' like a man/I been workin' all my life," she declares, as the music cockily struts towards swinging funk—and then, right after she multi-tracks herself for a line, we get a full on Memphis horn line, which veer into jazz. That's 90 odd years of music condensed into three minutes of seamlessly awkward awesomeness. The song is a monster of backwoods cool.

The rest of the album is lower key, but it's never less than great. "Somebody To Love" finds the sonic link between doo wop backing "ooo"s and bare country fiddle while June plays ukulele and lets her vocals lean into Booker T. Jones' dreamy organ backing with those paint-stripping vocals, exquisite pain and pleasure. "The Hour" is straight up girl-group sung so hillbilly it makes you wish Hank Williams had done a session or two backed by the Shirelles. "Tennessee Time" is slow-tempo hippie folk, complete with exquisite mandolin and a buddy good time chorus where June's keening vocals jump ahead and soar above her male duet partner, raggedly perfect. "Pushin' Against a Stone" has a distorted wailing psychedelic guitar set against a Stax rhythm backing while June does old school R&B that is actually old school—none of this neo crap. On "Shotgun" she sings a bloody-minded blues country death song, her voice wailing besides her remarkable slide guitar work. And then, improbably, the album closer, "On My Way," lifts the tune from "Friend of the Devil"—which is, as it turns out, a great song if you can find a great singer to sing it.

You could argue that the inspirations here aren't as diverse as I'm suggesting; the nasal Hank Williams vocals could come from Shirley of Shirley and Lee instead; the acoustic gospel of "Trials, Troubles and Tribulations" could derive from singing preachers like Washington Phillips rather than from the Carter Family. You listen to the tough blues of "You Can't Be Told," and June's nasal voice derives more from Howlin' Wolf than Bill Monroe. But that's what's so glorious about the album; black/white, rural/urban—it all sounds like a single tradition. It's as if Howlin' Wolf and Bill Monroe both loved Jimmie Rodgers, if the Carter Family and rural black singers shared a love of the same spirituals, if poor rural whites played R&B instead of country. Pushin' Against the Stone is just like the music we've got, only better.