On the Adjustments single. 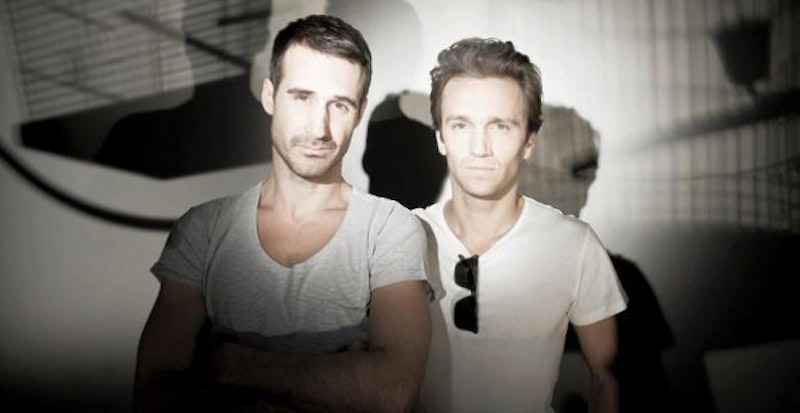 Despite what I've seen, in videos like this, I have a hard time believing that anyone actually dances to Benoit & Sergio songs. I cannot accept it. Tunes like "Boy Trouble" and "Bridge So Far" simply aren't built for the extraneous dipping and twirling one associates with cardiovascular, BPM-fueled clubbing. The house music made by Washington, D.C.-based duo of Benjamin Myers and Benoit Simon befits small gatherings more than dance floors. More considered, complex, and earworm-y than something like Poolside, Benoit & Sergio are a perfect compliment to brisk walks and office work: propulsive enough to stir the blood, thoughtful enough to stoke the imagination. Whispers of a full-length began to swirl around this time last year, but until it materializes, we'll have to make due with the continued trickle of singles and EPs from these guys. Adjustments is their best since New Ships—maybe better, depending on which half of this single you're inclined to jam on.

The lead-off cut, "Shake Shake"—which has nothing whatsoever to do with Metro Station—is the fluffier of the two; it's easy to imagine sorority girls drunkenly stage-whispering the nonsensical refrain to one another. A juked chassis of bounced bass and piano drizzled with unrecognizably deconstructed vocals that suggest a hand-held shaker—occasionally interrupted by a molested loop where someone insists, apropos of nothing, "don't fall in love"—the song is something that would make sense peeking out of an extended mix or playing softly at an Urban Outfitters retail location on an early Friday evening. It's buoyant, cheaply bittersweet, and while I don't mind it, I'm not enamored with the purposefully giddy, slightly smug bop of "Shake Shake."

The title track is a better bet because it feels more layered, more designed. Understated, oceanic, and a bit melancholy, "Adjustments" ranks up there with "Boy Trouble" and "New Ships" among Benoit & Sergio for limitless replay value. Also, it falls into a sub-genre of pop that I don't necessarily check for but which I do find amusing, songs where the speaker is critical of a DJ, or DJs as an entertainment class. "Adjustments" is fun because it's an exhaustedly crafted house ballad where DJs are excoriated for stuffing their sets with exhaustedly crafted house ballads when, after all, the bros on the floor just wanna vibe, you heard? "Sometimes, I think the DJs don't understand," Myers moans, "that we've been waiting around all week for this... and we don't care about the kind of frequencies or resonance, we just wanna dance/you see, they've gotta make adjustments." And, of course, "Adjustments" is itself a shadowy cache of wall-to-wall adjustments, a spidery fantasia of subtle shifts of pitch and spritzes of piano, synth effects cricket chirpy and somberly tolling and playful falling atop one another, vocal lines tumbling in and out of hollows or dissolving into dozen of layers of complaint and longing. It's nothing anyone will want to dance to, but it's a wonderful place to live.