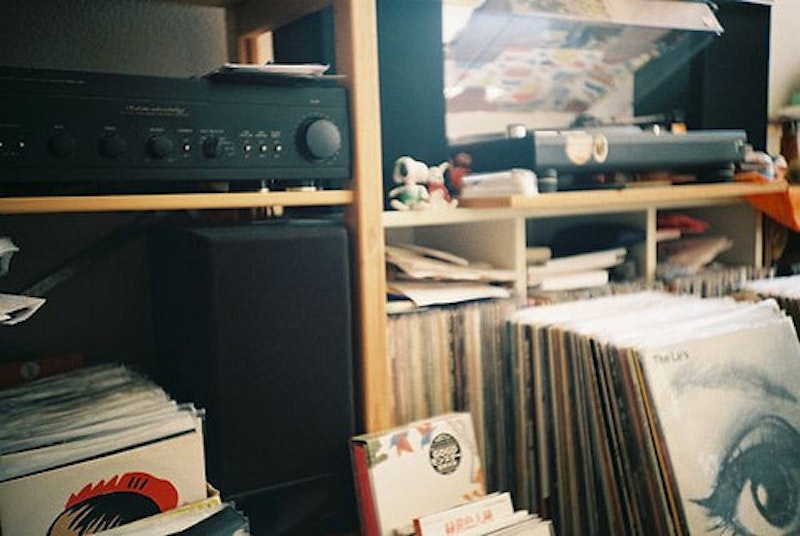 In preparation for the Splice Today music poll, I re-listened to my favorite albums from this year, and neurotically quadruple-guessed myself. Is the Iggy Azalea album everyone hated actually good enough as bubble-gum rap to slip into the bottom of the list? Would it be ridiculous to put in that album of great piano trios even though I didn't listen to any other classical music release this year? Should I like FKA Twigs more? Lana Del Rey less? And what exactly is wrong with me this year that (despite the fussing about Azalea and Twigs and Del Rey), I've got so few women on this list?

There's a certain brand of Harold Bloomian anti-PC political correctness which would no doubt fume ominously at that last question, brandishing its reason and befouling its tweed. "You mincer of meritocracy!" the Bloomian might declare. "The canon is a sacred mark of quality! Away with your demographic concerns! Just list all your excellent white guys playing guitar and be done with it!"

Ah, the white guys playing guitar. I love me some white guys playing guitar, don't get me wrong — A Sunny Day In Glasgow put out a strutting rockstar indie genius album this year, taking a step from shoegaze towards Fleetwood Mac, and it's wonderful, female vocalists and all. Probably, if I wanted, I could’ve found another 10 or 15 indie rock records to fill out my list. And then there I'd be, with a bunch of guitar rock by mostly white guys with some female vocalists as well, and Harold Bloom would be happy if Harold Bloom liked indie pop, which I'm sure he doesn't (okay, maybe he liked Pavement.)

The point is—gender and genre have a common root. They go together in culture generally, and popular music in particular. More, people often use genre as shorthand for quality. Indie rockers like A Sunny Day in Glasgow are geniuses; dance pop like Katy B's Little Red is schlocky, slick crap. And (not entirely coincidentally) the genres that are "quality" and arty are infested with white guys like Stephen O'Malley, while the genres that are less respected are less male and less white, a la Danity Kane.

The point isn't that you (and you!) should put Danity Kane (who is great) on your list and ignore Stephen O'Malley (who is also great). Rather, it’s that often you make a choice about what counts as good before you even hear it, and that the way that those choices get made has a lot to do with social fissures, like race and gender and, for that matter, nationality; there is not much Thai pop music or Bollywood playback on my best of list this year.

Obviously, no one can listen to everything ever released everywhere in every genre and closely compare each to each. But I think it's worth trying to at least make a gesture at defying the inevitable insularities. Even if you're trapped in a tiny box, you can peer out and gaze upon the walls of a slightly larger container. You try to get to that larger container in part by listening to a range of genres, and by not just default succumbing to demographic destiny. Because, while white guys do make lots of awesome music, from death metal to country, it seems silly even for a white guy to think that they make all the awesome music. A best of list can't be as big as the world, but part of the game of that "best" is to pretend it can.