New Pumpkins album Monuments to an Elegy is, for once, not pretentious. 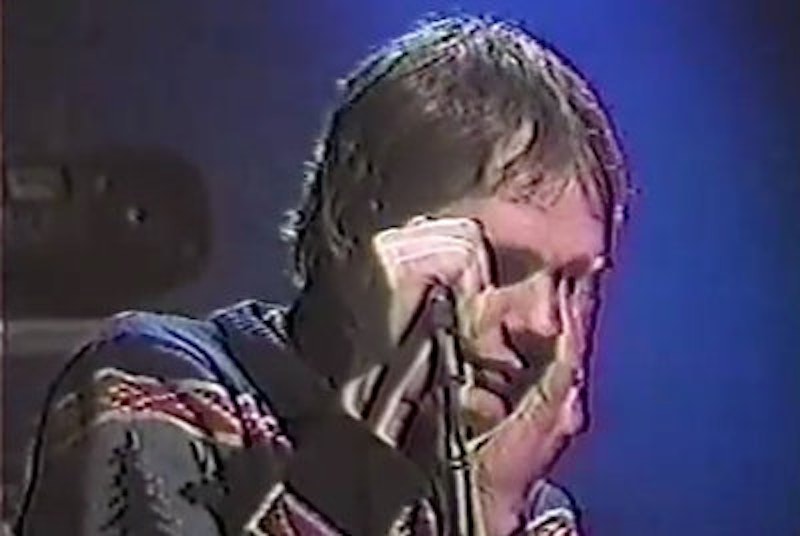 Since re-forming the Smashing Pumpkins in 2007, Billy Corgan has done so much to taint his legacy and reputation—going completely overboard by intentionally antagonizing audiences (a Pumpkins tradition) on a 2008 anniversary tour (Corgan says he was “playing the heel” when he asked a heckler, “What was the last hit song you wrote? Oh yeah—‘Take Your Dick Out of My Ass and Put it In My Mouth’—it was a big hit in Europe.”) When he called Devi Ever a “he-she” after a minor professional falling out, when he hired 19-year-old drummer Mike Byrne and kept him around for years despite his shit playing (he’s always wanted a son…), when he fired Jimmy Chamberlin or drove him to quit the band for good in early 2009, the whole wrestling thing, his eight-hour modular synth interpretation of Herman Hesse’s Siddhartha, burning every bridge that he crosses… it wouldn’t be so annoying if he was still making great records. But Zeitgeist and Oceania are failures, noble as they are in their risk and scope. Both records were, to my ears, blatant and calculated attempts at recapturing a broader audience like the Pumpkins had until the end of the 90s. Which is fine, but the songs were awful, and obnoxious production ruined the few good ones.

Luckily, he’s ditched Byrne and the idea that SP would ever be a real band ever again. The Pumpkins’ latest, Monuments to an Elegy, has none of the pink-elephant-in-the-room hang-ups like the other reunion records did. For the first time in years, Corgan has mixed his vocals properly, and for the first time ever we have a Smashing Pumpkins album that’s only 33 minutes. While the songs on Monuments to an Elegy don’t approach the peaks of Mellon Collie or Adore, it hangs together remarkably well, and doesn’t overstay its welcome, unlike almost every other SP record.

Openers “Tiberius” and “Being Beige” are among the best tracks here, both featuring a mix of wistful piano lines that could’ve only come from the man who wrote this, and walls of distorted Stratocasters. Monuments is concerned with hooks and no lyrical substance is attempted—for many songs, like the excellent “Dorian,” the less excellent “Run2me,” and the solid “Anaise!,” Corgan simply repeats the title over and over, bleating in bare difference. In other spots, he runs with his standby lines like “lover(s)” and variations on “love is strange.” This is a pop record with radio ambition, so the words are just a means to a hook and a good melody. It doesn’t attempt or pretend to be something grander than it is like Zeitgeist and Oceania.

The first time I heard “Being Beige” a couple of months ago, the bland & clichéd chorus line of “the world’s on fire” came off as another half-baked political statement like “United States.” But now the chorus is stuck in my head, locked in there, aided by that beautifully lilting piano line. Corgan has kept it conservative this cycle. Expectations are so low that early reviews see Monuments getting higher ratings and more raves than Siamese Dream or Mellon Collie ever did in their time. The best thing I can say about this record is that it’s 33 minutes long, a fairly mind-blowing “concept” in Pumpkinland. The mood is jubilant throughout, mining the depths of Corgan’s new wave obsessions. If this were 2007 or 2010, the mix on “Dorian” probably would’ve sucked all the life out of a song that has no lyrical substance to begin with, but as it appears here, the song strikes me as one of the best things the Pumpkins have put out post-reunion. The same goes for closer “Anti-Hero,” which ends on a dime, and before you know it, the record is over, leaving you wanting more. Next year’s follow-up Day for Night is supposed to be all the weirder songs, like the second disc of Mellon Collie. The one track I’ve heard live from Day for Night, “Burnt Orange-Black,” is a musical copy of 1995 masterpiece “Porcelina of the Vast Oceans,” but the mimicry is so obvious that it has to be intentional. “Porcelina” is a good song to copy either way.

The past four years have seen Billy Corgan’s body of work completely reevaluated by a new generation of fans that might’ve even been too young to see the Zeitgeist shows. People were genuinely aggrieved that James and D’arcy weren’t involved, despite the fact that no one on the inside denies they were merely spiritual and aesthetic contributors to Corgan’s vision of the Pumpkins, and played very little on the records. No one ever disputed Trent Reznor for calling himself Nine Inch Nails, so why did it take until 2014 for people to accept that Corgan is the Smashing Pumpkins and always has been?

Well, they were sold to the public as a band, a dysfunctional family unit that mirrored Corgan’s childhood troubles. It was great marketing—sincere and real, but a marketing tactic nonetheless. Being a Smashing Pumpkins fan is accepting the fact that Corgan is usually full of shit and trying to cover his ass, so Monuments to an Elegy is an extremely refreshing about-face. It has none of the false promises and pretense of disasters like the rock opera part of Machina, or the abandonment of the Teargarden by Kaleidyscope project. Corgan isn’t struggling here—he’s a master popsmith, and though the record has the impossibly small and dense production of a car commercial soundtrack, the nature of the thing and its stakes are acknowledged, so no offense taken.

Corgan can do anything, but he’s his own worst enemy, once throwing away an entire album’s worth of solo acoustic songs after reading live reviews on Netphoria. Okay, so that led to the less than spectacular TheFutureEmbrace—you see how frustrating being a Pumpkins fan can be? Why must Corgan test our dedication to him? I don’t know, and don’t care—I just want him to be happy, and on Monuments, the joy isn’t contrived like it was with the Zwan record or most of Oceania. Sure, he rips riffs from himself (tell me that “One and All” isn’t a Vanilla Ice-level copy of Mellon Collie throwaway “The Viper”), but for once, he’s set the stakes lower, and ended up with the happiest record of his career.