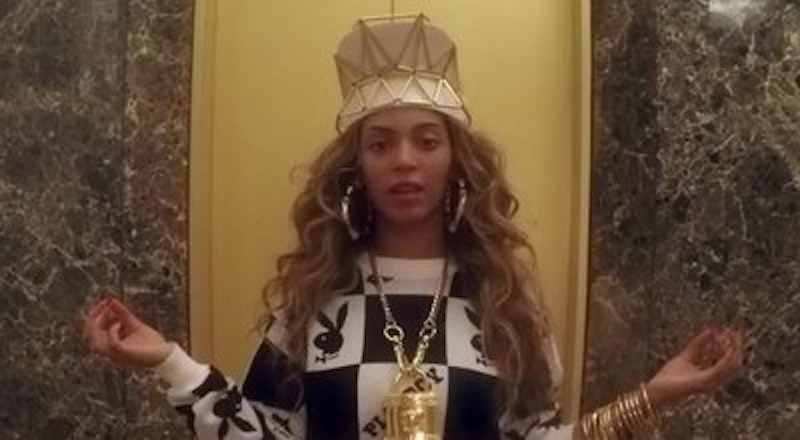 “7/11,” packaged with this November’s Beyoncé re-ish as a song and a video, is curiously, engagingly minimal. It’s silly. There are no Big Themes or Tabloid-Baiting Smirks or Possibly Feminist Discourses or Markers of Bey’s Personal Struggles. Strictures of modern musical composition are not really challenged or interrogated. A new standard is not set for melisma or R&B dominion or any of the other shit that pop critics like to argue about besides pop to justify our built-on-quicksand cache. “7/11” is tacky, catchy, and improved by its fun, cornball video, which must have been the star’s least costly one yet.

00:20: That “whoop!” you just heard is cheerleaders everywhere freaking the fuck out.

00:49: The biggest expense for this shoot was either renting out the floor of this hotel, or for standby medical personnel in case Bey or one of her dancers crashed and burned. Expect a ton of sororities to attempt their own versions of this thing and wind up in the hospital.

01:00: It’s fun to fantasize about the underlying context here. Like, why are Bey and her friends holed up in a hotel, by all indications for an extended period of time? Why would they have needed to book the entire floor? Why is there a multi-colored pup tent erected just outside of the bedroom?

01:07: I’ll have to check, but this may have been the first time in music video history where somebody cartwheeled in a hotel hallway while wearing a fur, shorts, and sunglasses.

01:40: You could go really deep in trying to parse the dice politics in this video, or you could just be like “Maybe there aren’t enough dice in my life.”

01:57: This is where the “7/11” video briefly transforms into a Billy Blanks infomercial where everyone wears men’s underwear.

02:22: Turns out that this Christmas, Beyoncé will be dressing up as Kreayshawn, Luke Skywalker, and Michael Jackson, all at once.

02:39: Beyoncé screams into her bare foot as though her bare foot was in actuality a cordless land-line telephone, and that scream echoes.

03:06: Some random dude leapfrogs or karate kicks through the hallway in a detached shot. We see him again, fleetingly, 15-20 seconds later. I love the thought that perhaps dozens of extras were hired to be dancing all over the place on this floor at all times, just in case the camera crew happened upon them.

03:35: What makes “7/11” so endearing—more so when one isn’t analyzing it—is how playful and accidental it can seem even when it obviously isn’t fully playful and accidental, as though Bey and a multi-racial coterie just happened to be kicking it at a hotel on a day between tour stops, sipping from omnipresent red cups, and talked themselves into using everyone’s smartphones to film a video they’d never air for anyone. The last moment crystalizes this projected artifice: the swung, spinning selfie videography, the star’s delirious laughter. That, at least, feels indisputably real.