Beauty, Wagner, and the Ring That Binds Them

All he was trying to do, really, was make a few things clear in an upsettingly murky world. 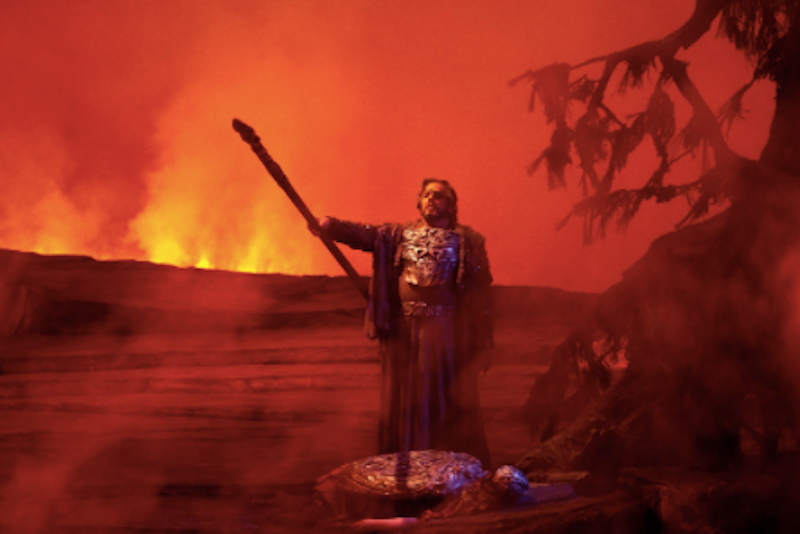 There’s definitely something wrong with Richard Wagner. For years I didn’t believe this was possible, because Friedrich Nietzsche hated Wagner, for what appeared to be petty and personal reasons. As somebody who likes reading Nietzsche, and considers him to be (on occasion) completely wrong, I chalked his Wagner thing up to jealousy and sexual panic. I’d heard sublime female singing in excerpts of Wagner’s music, so I assumed Nietzsche just didn’t want to praise a composer who did his best work writing for female singers. I figured Wagner wasn’t manly enough to satisfy his (former) friend Nietzsche’s tragically epic tastes.

At the same time, I never listened to The Ring Cycle, partly because I could never find 100 million consecutive hours to devote to its unabridged vastness, and partly because… somehow… whenever I did sit down and put it on, I didn’t enjoy it. Again, though, I made excuses for Wagner. I assumed he’d grow on me. I wondered if, perhaps, I needed to know what the German libretto meant in English. So it wasn’t until I began self-isolating, with Herbert van Karajan’s 1998 recording on tap, that I really had time to listen to Der Ring des Nibelungen, to understand it, and gasp with horror. It may be the most important piece of bad music I’ve ever heard. It fails on virtually every level, aside from certain moments, none of which it can sustain. And, to paraphrase Hunter S. Thompson, its failure is also our own. Wagner didn’t mean to turn his magnum opus into an unbearable display of bad taste. All he was trying to do, really, was make a few things clear in an upsettingly murky world. He wanted to write an opera full of manly men and lovely women. The end result, though, of that apparently doable project is a relentless farce. To comprehend The Ring Cycle is to despair of all your gendered certainties about the beauty and meaning of high art. Which, I’m sure, are certainties you don’t consider particularly gendered. Well—there’s the rub.

The Ring Cycle can be divided into four basic modes: two male, two female. Let’s start with the women. There are choral passages for the female singers, and there are solo arias. In the choral passages, Wagner does the same thing, for voices, that the Rockettes do with legs. He doesn’t just blur them: he mass-produces them. Wagner’s scores are an assembly line designed to erase all meaningful difference between women, merging them into a single harmonic “line of beauty.” This is, in a sense, more honest than somebody boring you to death by avowing that each and every person on Planet Earth is beautiful in his or her own special way. We’re used to quantifying ideals. Everybody can call to mind a particular jail sentence that was too short, and didn’t adequately punish some villain’s heinous crimes. In other words, too little justice was done.

We also think of happiness as a quantity. It overflows, or gets drowned out by pain, does it not? The difference, with beauty, is that women are supposed to be “the beautiful.” So the ideal woman and the ideal of the beautiful converge at degree zero, as dizzying as a pair of facing mirrors. Identical voices, stripped of all identity, are “woman.” Wagner was too much of an artist to go out in the world looking for women. He understood them perfectly well—in the abstract. In The Ring Cycle, the music of the “maidens” glorifies his cold absolute.

It does more than this, even; the choruses also beckon. They’re flirtatious, in a stilted way that sounds rather comical to non-Germans, but which is very salacious to cultural natives. (In this regard, Wagner’s folk influences are pretty unabashed: you’ll hear some of the same chord progressions in a beer hall sing-along.) Unlike justice, happiness, or truth, the absence at the heart of beauty demands an onlooker. Beauty never is unless it has someone to be for, because it’s feminine. So there are never just maidens lounging by a river in Wagner; there are only maidens lounging anxiously by a river, asking if you can see them lounging, and if you like what you see, for (oh!) they hope you do. It’s like those old Clairol Herbal Essences commercials where the woman was supposedly having a shampoo-derived orgasm. She can’t just wash her hair. She has to orgasm while washing her hair, and she has to tell someone about it (coyly, by pretending to send them away).

If woman is beauty incarnate, then the masculine must somehow be the opposite. A moat of difference keeps maleness at bay, leaving the man yearning to be united with the beautiful. This unison is an experience of rapture, and rapture is denied to the men in Wagner, in order to keep the sexes segregated. So, much like the laundry, women do it for them. You’ll hear lots of passages where a single female singer intertwines her voice with the orchestral melody, instead of harmonizing with other women. These are the only good moments in Wagner. They’re incredibly adept games of tension, with stunning melodies that break the rules of regular harmony in all sorts of ways.

The problem is, they come out of nowhere. It’s Wagner who created the operatic cliché of the female singer, in a Viking helmet, suddenly emitting a piercing wail that instantly kills anyone with a heart condition. Let me back up a step: they don’t exactly come out of nowhere. They’re appendages; they’re supposed to explain, on an emotional level, whatever the male character has just said in his toneless recitative. Nonetheless, because the man can’t let his vocals really soar—that would be effeminate—there’s never a good segue here. It’s like those awkward moments, in modern musicals, where a simple question (“Where are you going this afternoon?”) is followed by the heroine staring oddly into space, opening her mouth wide, and bursting out with “Well… I’m go-ing to the stooooore, there to buy the iiiiii-tems my he-arrrrt longs forrrr.” It’s as if, the whole time the man is speaking, the woman is huffing helium, as she patiently and sympathetically listens to him blather. When he finally stops, she responds with the sweet, maternal shriek of a helium-addled lunatic.

It’s not just that the men can’t ascend to the same angelic heights Wagner keeps forcing his women to scale. It’s that the women can’t really do anything a man hasn’t already explained, plotted, and (probably) attempted himself, because they’re archetypes of beauty. Beauty is static. Movement, exposition, and plain-spoken reality are its sworn enemies. Thus, in Wagner, it’s always the man who handles the prose bits, and since this is an epic mythological cycle about the dawn of the world, there are a lot of them. The man is the maker; Wagner includes the sound of a smith banging away on hot metal, not because it sounds good, but because it sounds terrible, and is therefore clearly masculine.

The man is the thinker, the schemer. He doesn’t even seem to register the startling, magnificent melodies that the women emit. When there’s dialogue between the sexes, the men respond with all the emotion of a telegraph employee taking dictation: “OK… here’s what I have… you’re going to die for me… this is your consummate—consummate?—end… you willingly give yourself to eternity with this sacrifice… sure. That it? Would you like to add anything else?”

The men can do one other thing besides narrate, according to Wagner. They can roar. I’m trying to put myself in Wagner’s place, to really think like him, and it comes down to this: men who can’t roar aren’t lions, and without its lions the world will perish. But there’s always the danger that a roar will get too melismatic and too pretty as it climaxes, so Wagner keeps them short, with accompanying explosions from the brass. The men give these warlike shouts of valor at steady intervals; you can set a watch by them. Naturally, they sound angry all the time. For a modern listener, used to divorces and mid-life crises, this is unnerving. The men sound both neurotic and like they’ve never had a sexual encounter that lasted more than 18 seconds. It doesn’t matter if you’re watching a DVD of Der Ring des Niebelungen, and can see the pantomimed story, or if you’re just listening at home. Either way, you’ll discover that the most “heroic” passages sung by men have been totally overwritten, as you try to hum along, by that Wagnerian joker who wrote, “Here I come! To save the dayyyy!” Yes. It all sounds a little like the theme song to Mighty Mouse.

It’s encouraging to think that a trans artist like Antony Hegarty, on his breakthrough album I Am A Bird Now, can blow this kind of pretension to smithereens. Hegarty sometimes sounds like a man singing in a woman’s range, wailing with unutterable pain. Other times, Hegarty sounds like a woman, deep in the “masculine” range, singing with the steady tenderness of a sister. When you cross these lines, and re-cross them, you can end up in places that are both genuine and new. But the Rockettes still perform, at least on special occasions, and if you don’t know who they are, or what Richard Wagner composed, so much the worse for you. Some things, that should not have been forgotten, are lost. And The Ring Cycle, which warned us of all the mechanical ways we would be divided by sex, seems to have passed out of all knowledge. Except for the notion that it is an unassailable work of genius. It is nothing of the kind.