On Bobby J. & the Generations and the majestic Dome Records, a "custom label" based out of East Baltimore since the early-1960s. 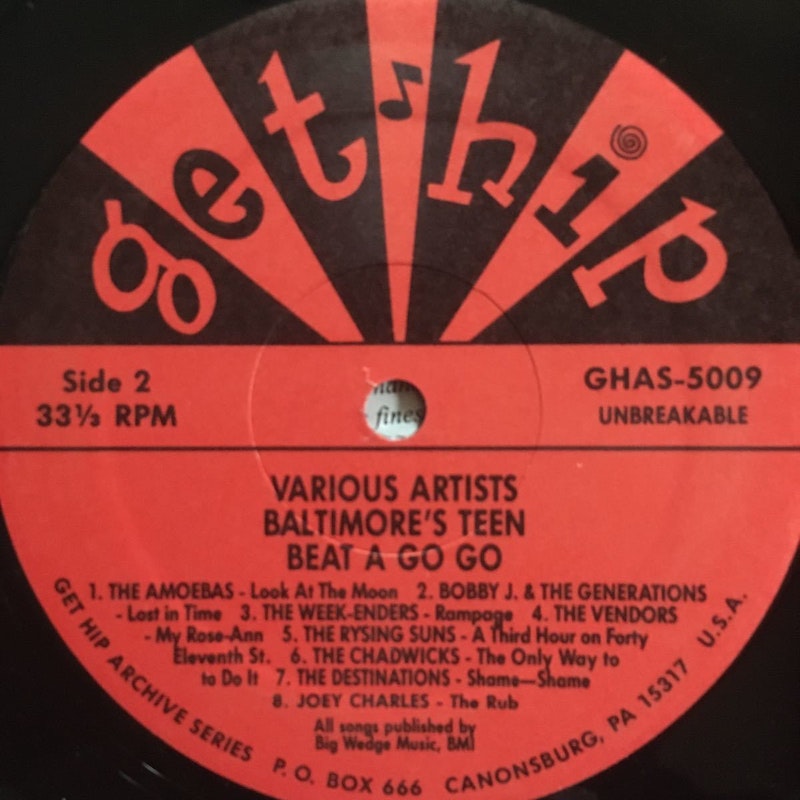 Bobby J. & The Generations' cathartic power was immortalized by local producer Ralph Johnson and his indie imprint Dome Records. The label had been putting out low fidelity 45 rpm singles by young soul, pop, country, and rock artists since the early-60s, all of which bore a majestic label logo modeled after the shiny ornate onion domes of St. Michael’s Ukrainian Orthodox Church, a landmark that was only footsteps from Dome’s east Baltimore headquarters. Johnson was running what the record industry used to call a custom label, meaning artists would pay his company a flat rate for the recording, mastering, small batch pressing, packaging/cover design, and limited distribution of vinyl records.

Mountains of rare and outstanding discs from the Vietnam era were issued by custom labels, some of which maintained such a large and diverse clientele that they were able to franchise and offer services nationally, complete with mobile recording and mastering facilities carted around in giant trailers. Century Custom and Mark Records were two of the main American custom labels that maintained commercial territories larger than a single US region. Anyone with cash to spare could utilize the services of these companies, though educational institutions, amateur artists, and other acts from off the beaten path formed the majority of the custom labels’ clientele.

Money was no object in 1965 when Ralph Johnson and ex-Bill Haley & The Comets member Joey Welz came up with the idea of assembling and releasing Baltimore’s Teen Beat A Go Go, a compilation album featuring what they considered to be the area’s best teen groups. Space on the LP was awarded as a prize to the winning acts who participated in a series of battle-of-the-bands competitions that’d been held throughout the city and its surrounding suburbs shortly before the record’s release. Like vanity labels and all ages/alcohol free nightclubs, these live music competitions were a ubiquitous part of America’s early DIY teen scene. Johnson was well aware of The Generations’ local success and wild reputation, so they ended up as one of the few acts whose album appearance came as the result of an offer from Johnson himself and not the direct consequence of any band battle victory (though its worth noting that the quartet regularly played the battles and, more often than not, left their competition in the dust).

In February and March of 1966 a series of Bobby J. & The Generations sessions took place at Dome’s modest two-track studios, a tiny space located in a converted storefront that sat right along the main thoroughfare Eastern Ave. The February session produced recordings of two Tony Montone originals—the rockin’ Rick Nelson-esque “I’m Shy” and a moody love song called “My Girl” (no relation to the Temptations tune). The master tapes of the Feb. ‘66 cuts were unreleased, but the March session forever solidified the band’s status as Maryland’s ultimate punk berserkers. It was then that they recorded their contribution to Baltimore’s Teen Beat A Go Go, the Davis/Montone composition “Lost In Time.” There are so many ways one could view this extraordinary juggernaut of a song. It’s a trip through the scariest realms of an adolescent psyche; the crude essence of innocence lost; an exorcism of grief and fury.

Ignited by a jagged, acoustic-sounding Tony Montone guitar riff, the song rips out of the gate with an eruption of thunderous drum fills and bass throbs that crash into Bobby J. Davis’ inimitable razor-ribbon leads, all preceded by one of the most disturbing caterwauls ever put to tape. Like so many other snotty punk monsters, the song deals with a relationship gone bad, but even that mundane topic sounds vibrant in The Generations’ manic hands. Bobby J.’s sorrowful lyrics and tenor vocals crackle, quiver, and shred with a poetry that’s stilted, morose, and self-assured, ping-ponging relentlessly between these extremes throughout the song: “I should have realized/With all the tears I’ve cried/Some were not in vain/And some must still remain/I’m lost in time!”

The track’s climactic guitar solo finds Davis burning the frets to a crisp with a battery of lightning licks, a move appropriately foreshadowed by yet another blood-curdling scream that’s even more hellish and terrifying than the first. One more verse, one more chorus, and (barely breaking the two-minute mark) this storm of a tune ends as abruptly and dramatically as it began.

Baltimore’s Teen Beat A Go Go received two pressings. The first came out in 1966; the second was released with a slightly expanded track list and more artists in 1967. Five hundred records made up each edition and both featured “Lost In Time,”, unquestionably this record’s best cut. These albums were mainly sold at Generations gigs and those of the other artists on the record. Some were given away for promo and to artists’ family and friends. This important teen rock document has become more legendary as decades have gone by. The Get Hip label reissued the ’67 pressing on vinyl and CD back in 1997 and it’s stayed in print ever since.

Bobby J. & The Generations’ story didn’t end with the release of one genre-defining punk blast on a scarce LP Shortly before fading into obscurity, the combo’s creative mayhem would lead them into an unfamiliar world light years away from the clean-cut all ages gigs that paved their way to local fame.