His Slasher Flicks’ debut LP is scary, goofy and exciting. 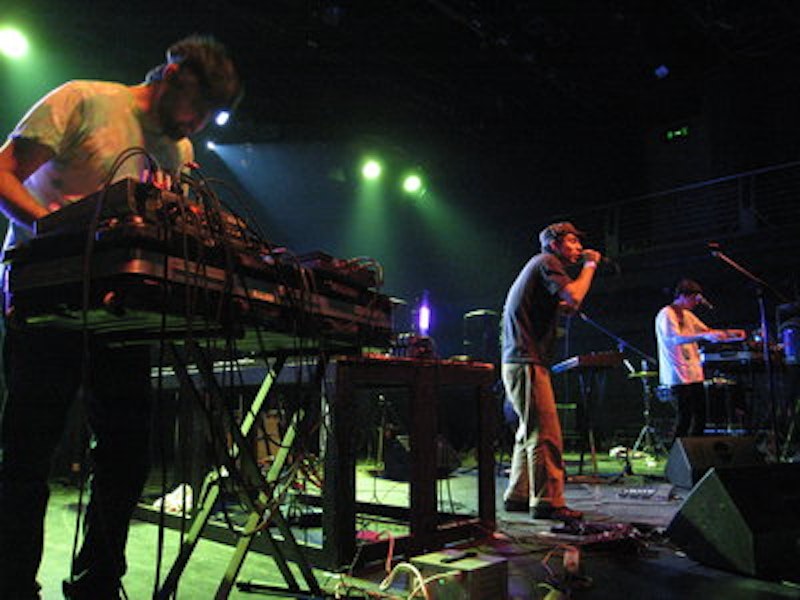 On a long drive back from New York the other night, a friend and I were jabbering as his iPod threw a dozen or so Animal Collective songs into the mix. “Winter Wonder Land,” “Turn Into Something,” “Derek,” “Winters Love,” “Bluish,” “Loch Raven,” “There’s an Arrow,” “Bat You’ll Fly," among others. It was an unintentionally brilliant cross-section of their career and their versatility. Like a wheel, AC has always been able to venture out onto the different spokes (tree limbs if you wrote for Pitchfork in 2003) without sounding like anyone but Animal Collective. Ten years on from their critical breakthrough Sung Tongs, and nine years since we both found them through Feels, my friend and I talked about discovering the AC and, aside from being hypnotized, how refreshing it was to have a band made of friends that espoused positivity and love without being cloying, obvious, or hypocritical about it. As far as we knew back then, interpersonal problems were nil, and the AC from 2005-2009 felt like the culmination of an entirely new sound, the Beatles of experimental music. A generational watershed just like every decade needs.

Were they as influential to a generation of kids as the Beatles, the Sex Pistols, the Velvet Underground, R.E.M., or Nirvana? Almost. Commercially successful? Not even close, but in underground music, no one’s scent has lingered as long and powerful. Instead of flannel and distorted guitars, or Beatle wigs, the kids and young adults of the 2000s bought SP-404 samplers, started chanting and doing glossolalia through gluttonous amounts of reverb and delay, all backed by Sam Cooke refrains, water droplets, wind, field recordings, or just generic “nature sounds.” Most of these half-baked projects and imitations sucked, and I’ll spare the also-rans who got some attention because that’s come and gone. As a young teenager, I spent some time with a 404, and no, I didn’t make the next Person Pitch either. Sorry.

So I never thought the AC would break up, and still don't. After inhaling and digesting the obsessions with death, depression, drugs, murder, and suicide of rock and rap music in the 90s as a “tween,” it was an ecstatic experience, watching a band just churn out amazing record after record, as a band and as individuals, without any of the clichéd “friction” that felt as common as quarter-inch cables in big bands with independent songwriters. In hindsight, of course they had personal problems, they just weren’t well documented, thank god! I mean, look at the lyric sheet of Panda Bear’s Person Pitch: over-beatific surf rock and soul samples. Noah Lennox was a firing squad, condemning and questioning his family, friends, bandmates, hipsters, and the nascent online music press. Keep in mind he did it with the voice of an angel, a one-man Vienna Boys Choir that took passive aggression and sublimated it into a religious, hymnal sound of Truth. To this day, it’s still one of the most popular LPs in the AC catalogue. And through deft scheduling and just taking time off, they’ve maintained a comfortable rhythm for a while that allows great solo records to happen without any jealousy or mistrust. It was all laid out on Person Pitch: “What’s the point in pouring it all out when you guys just wear it on your coat? I believe that for this piece of time we can really crank us up a lot. Get your head out of those mags and websites that try to shape your style. Take a risk just for yourself, and wade into the deep end of the ocean.”

Things might be different if they were millionaires with Beatle-sized egos and eight-figure coke tabs. Instead of breaking up to go off and make nasty and accusatory solo albums, they’ve maintained a healthy artistic relationship despite living in different countries and with, ostensibly, nothing left to prove. So this year, we’ll get two new non-band records from Avey Tare and Panda Bear. I can’t help but think the title of Panda Bear’s record, Panda Bear Meets the Grim Reaper—out in the fall—is a reference or was inspired by Tare’s (née David Portner) latest project, Slasher Flicks, and their smashing debut Enter the Slasher House. Not the bitter attacks you’ll find on Ram or Imagine, but constructive, creative bouncing inspiration, just as Person Pitch heavily informed Merriweather Post Pavilion. Self-sustaining and healthy: not words you usually associate with a rock band! Portner has always been heavily into horror movies and Halloween aesthetics, as he describes it, a sort of playful darkness indicated by the inviting and hilarious title Enter the Slasher House. The men of Animal Collective make music that eschews the fixations of many of the big bands of their youth, but also the nauseating forced happiness of “twee” artists and other non-committal, mindless indie pop bands we’re plagued with now. All of their music is disturbing but beautiful at once, somber and serious and completely goofy and self-aware as well.

Slasher Flicks wanted to capture the sound of a band playing live together in a room, an effect attempted on the AC’s Centipede Hz that Portner felt didn’t work. Slasher Flicks is a “jazz rock power trio” featuring former Dirty Projector Angel Deradoorian and former Ponytail drummer Jeremy Hyman, and the influence of Fleetwood Mac’s Tusk and later-period Steely Dan are hard to ignore. They debuted a good chunk of the record at a surprise show in Baltimore last summer to roaring excitement. I wasn’t into Portner’s last solo effort Down There, and it deserves a revisit now. These songs rock, propelled by Hyman’s explosive and expressive percussion, Deradoorian’s low end synthesizer work, and Portner’s ferocious bark and his hornets’ nest of effects and microscopic production details. He recently commented how much he loves mixing for 12 hours or more at a time, and you can hear it: Enter the Slasher House has a lot going on, but unlike Centipede Hz, it breathes, and the final result is wider and warmer, more focused and precise than confused and jumbled.

Listen to lead single “Little Fang” and tell me you can’t hear those 12-hour days. This is a perfect pop song, perhaps Portner’s most accessible to date (my mom loves it), and I’ll spend the next year or several listening to it, over and over, discovering new parts and touches that await: the shimmering acoustic guitars that move in and out of view, the crystalline synth droplets, hidden backing vocals, all the drop-in modulation that Portner affixes to individual bars, notes even.

You can go on all day about how much time so and so spent in a studio, and how much they crammed into their music, but that means nothing if it doesn’t result in the kind of re-playability that’ll keep listeners listening closely for more than a week. Take a song like “Blind Babe” or “Strange Colores”—straightforward, fast crackers that you might call post-punk if you’re looking to get punched. There are so many effects and sonic gems glittering over every arrangement that the verse/chorus/verse format is no-problemo, I mean, for all I know these could actually be three-chord songs (jazz chords of course, in some bizarre tuning), but they’ve yet to bore, really the opposite: on every listen, the record reveals itself and you begin to appreciate what seemed overwhelming and impassable on first listen. Finally another example of studio rats being right all along. Sure, Bleach was recorded in three days, but so what? Many musicians will use any excuse to simultaneously look cool and do as little work as possible when it comes to making their records, the definitive versions of their songs that will be repeated digitally until the end of time. Slasher Flicks’ work ethic can be heard on every single song, and it’s a finished product that will continue to reveal itself over time, instead of being completely exhausted by the time Halloween rolls around.

“Modern Days E” is the red-letter song here, one of Portner’s best, and an example of why this record succeeds where Centipede Hz missed the mark. If you’re annoyed by my constant comparisons to that album, listen to Enter the Slasher House and read his interviews and tell me this isn’t Portner’s second-take. The modulated and molested field recordings of voices, insects, and swampy, mushy burps and squeals that covered Centipede Hz like an opaque gloss are integrated here with room of their own, and wisely, it’s not overdone. “Modern Days E” gets right to the point, opening with a four-chord stomp heading straight into a verse where Portner mewls through a ring modulator, Deradoorian’s voice rings round your stereo in gorgeous loops, and Hyman makes his high-hat tap-dance, leading into a joyous and explosive chorus, led by Hyman’s perfect percussion and wild, Animal-style of playing (really reminiscent of Panda Bear’s percussion on Spirit They’re Gone, Spirit They’ve Vanished), barrel rolls and candy chords with just the right amount of flange and phase applied. The melody is radio-worthy, but who cares? That’s just shorthand for really catchy, and every part of this song is. For such a huge opening, “Modern Days E” manages to up the dynamics and reach that spiritual excitement and childlike energy that I’ll never forget experiencing on hearing “The Purple Bottle” for the first time. Portner sings, “I know what it’s like to bend,” inside a beautiful descending melody with great urgency, as if he still has to make that clear to anyone listening.